For Will Smith, a break point leads to 'King Richard' But Smith, who stars in the upcoming drama “King Richard,” as Richard Williams, father and coach to Venus and Serena Williams, is reemerging after an extensive period of introspection. The 53-year-old, as he writes in a new memoir, has been meditating, participating in ayahuasca ceremonies and generally asking himself a lot of questions — about his own childhood and his choices as a father, husband and movie star. Will Smith greets the audience during his tour to promote his new book, “Will,” Thursday, Nov. 11, 2021, at Dolby Theatre in Los Angeles. (Willy Sanjuan/AP)

“My family was starting to hate me,” he says, chuckling. “Everything was going so well and everybody was so miserable. I thought, ‘Maybe I should take a look at this.’”

“From a spiritual standpoint, I started bumping up against the ceiling of what material pursuits can deliver. I climbed a whole lot of mountains and started to realize the carrot on the stick of material success,” Smith continues. “I guess I started hoping that there was something else because if hit movies was all there was, I was going to be in a mess.”

With more than $4 billion in box office, Smith is one of the movies’ biggest draws and most natural showmen. But in Smith’s blockbuster life, he’s no longer interested in pretending to be superhuman. “King Richard,” now in theaters and streaming on HBO Max, is part of a new direction for the actor. His performance is a sensitive and soulful portrait of a father who channels all his pain into love for his family. And it’s led to the best reviews of Smith’s career. A two-time Oscar nominee (“Ali,” “The Pursuit of Happyness”), Smith is widely considered the favorite to win his first Academy Award. 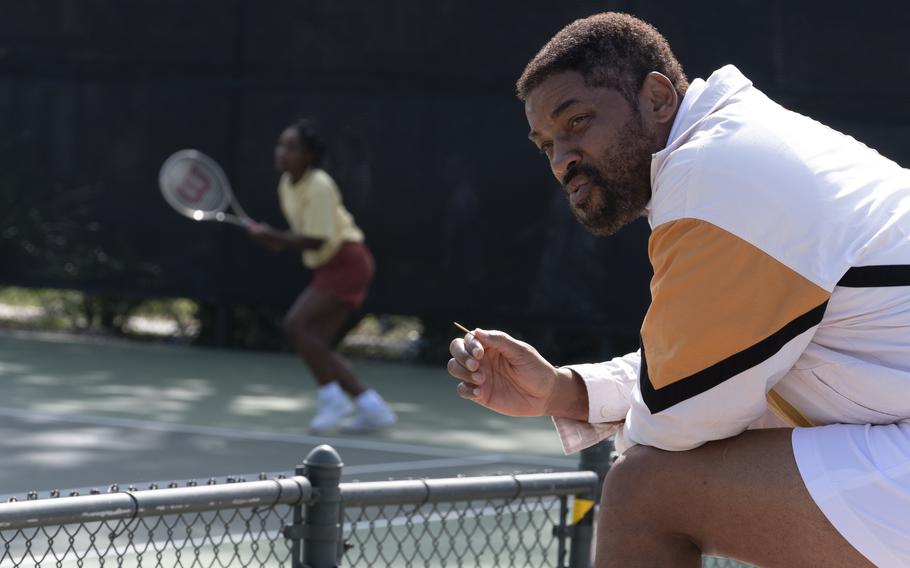 “Ten years ago, I wouldn’t have had the maturity and the life experience to find the subtle colors and textures,” Smith said in a recent interview. “Richard Williams is a hard man to love. But he’s a hard man to love because of how hard he loves. He has been so brutalized and he has been so disrespected and disregarded. When you bump into that trigger, there’s a volcano of hurt in there. His family became his oasis.”

“King Richard,” directed by Reinaldo Marcus Green, is an intimate view of the Williams tennis juggernaut and a nuanced depiction of their father-coach, often rendered as more of a self-promoting megalomaniac. It’s an authorized view of the Williams family; Isha Price, one of Venus and Serena’s three half-sisters, is a producer. It captures them as a tightly knit family whose accomplishments, from Compton to Centre Court, came from their determination and unity. 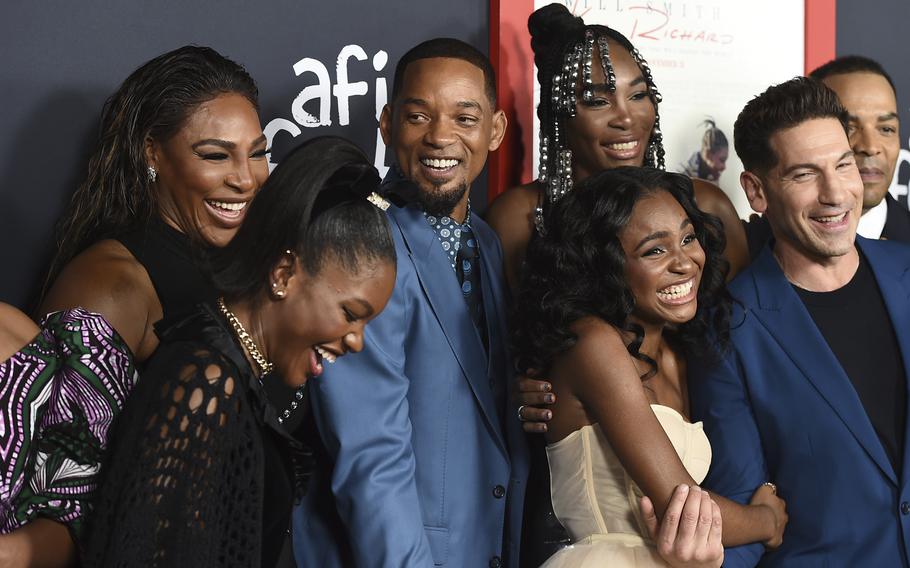 From left, Demi Singleton, Serena Williams, Will Smith, Venus Williams, Saniyya Sidney, and Jon Bernthal arrive at the premiere of “King Richard” during the American Film Fest at the TCL Chinese Theatre on Sunday, Nov. 14, 2021, in Los Angeles. (Jordan Strauss/AP)

Aunjanue Ellis plays Oracene Price, their mother. (Price and Williams divorced in 2002.) “King Richard” may be foremost about Richard, but Ellis’ performance, too, has been singled out for the way Ellis honors the less-known but no less formative parent of Serena and Venus.

“She is one of a long line of Black women that I know personally that hold the weight of the world with a smile, or not a smile, on their shoulders,” says Ellis. “Mothers like her, in general, can’t compartmentalize what they do in their children’s lives. They are their children’s coach, but at the same time they have to cook and clean, they have to do their hair, they have to sew tennis outfits for them. She was so much to this family.”

For Smith, the role of Richard Williams has many echoes to his own father. In Smith’s new autobiography, “Will,” penned with personal-growth author Mark Manson, Smith describes his father lovingly but also as a hard-drinking, militaristic man with a temper. He recalls, as a 9-year-old, seeing his dad strike his mother, an incident that left Smith feeling, he writes, like “a coward” for not defending her. A sense of fear, Smith describes, propelled him into show business. Much later, when his father was elderly and confined to a wheelchair, Smith remembers feeling the impulse to push him down a staircase.

Such confessions are far removed from the uber-joyful persona Smith has long embodied. As he’s showed on a star-studded book tour, with Oprah Winfrey, Ava DuVernay and others, Smith is still a superlative entertainer. But he’s now expressing more vulnerability in a therapeutic journey he’s presented for all the world to witness.

“As I am mining myself and being vulnerable in the exposure of myself, I’m seeing my ability to understand others, and my ability as an actor is increasing,” says Smith. “My personal journey into the depths of the joys and traumas of my past are definitely helping me to expand and build out a greater emotional toolbox that will allow me to portray more complex characters in the coming years.”

Smith this year has been shooting “Emancipation,” with director Antoine Fuqua, a true story about a heavily tortured enslaved man who emancipated himself from a Southern plantation and joined the Union Army in the 1860s. The film, which Apple will distribute, pulled its production from Georgia after the state passed restricted voting laws.

In Smith, Green, the director of “Monsters and Men” and “Joe Bell,” found a “locked-in” actor.

“I was meeting a supercharged Will at a time in his career that he has something to prove to himself,” says Green. “He’s looking for somebody to not just tell him yes. He’s probably surrounded by people who tell him that a lot.”

That included talking Smith out of using prosthetics on his face to appear more like Williams. Williams, himself, was never on set. The filmmakers instead relied on Isha Price as their contact to the Williams family. Serena and Venus are executive producers on the film and attended its recent premiere at Los Angeles’ AFI Film Fest.

Smith’s own family has been in the spotlight for years. Jada Pinkett Smith’s Facebook series “Red Table Talk” has provided an extremely candid view of their relationship and family life, with children Jaden, 23, Willow, 21, and Trey, 29, who’s Smith’s son from his first marriage with Sheree Zampino. Much of their young lives have been on camera — Jaden first co-starred with his father in “The Pursuit of Happyness,” and Willow appeared in “I Am Legend.”

In an emotional episode of Smith’s YouTube series “The Best Shape in My Life” — in which he chronicles his efforts to get into better shape physically and mentally — Smith read his children chapters from his memoir, sharing joys and regrets about how he’s raised them.

“If there’s one thing I’m proud of it’s that I got my children to take control and take the reins of their lives early,” Smith says. “I didn’t cultivate a dependency on me — perhaps arguably too young and too much freedom. But at a very young age they were free-standing in terms of their thoughts and their opinions.”

Smith’s personal evolution is ongoing, but his turn toward candor may be permanent. In his YouTube series, he says, “At this point in my life, authenticity is much more powerful to me than mystery.”

“It’s becoming the central focus of my life to be able to use what I’ve gathered in the first 50 years,” says Smith, “and start handing it out in the next 50.”