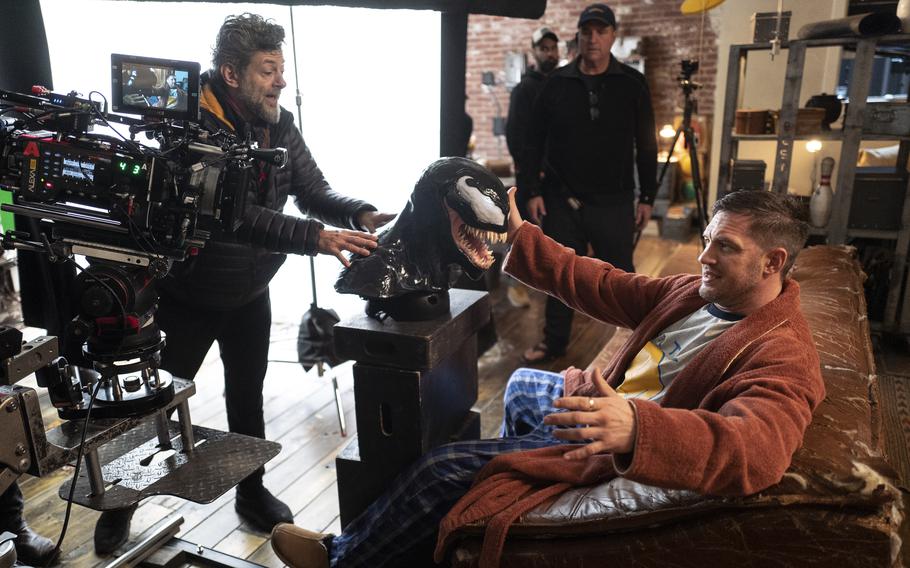 Director Andy Serkis, left, and Tom Hardy on the set of Columbia Pictures’ “Venom: Let there be Carnage.” (Sony Pictures)

If there was one broadly agreed takeaway from 2018’s “Venom,” it was that when you let Tom Hardy run loose, good things happen.

Not everything worked in the film, a darker, slimier spinoff adjacent to Sony Pictures’ “Spider-verse” Marvel world. But “Venom,” led by Hardy’s Jekyll and Hyde act, managed to break free of some of the prescribed rhythms of superhero movies.

In its most talked-about scene, journalist Eddie Brock (Hardy), is overcome by the alien symbiote living inside him: Venom, a slimy, sinister-looking alien hulk also voiced by Hardy. Venom has a ravenous appetite, so in a scene set at a seafood restaurant, Hardy improvised that Brock would, under Venom’s control, leap into a lobster tank. What was supposed to be background set dressing was rebuilt to support Hardy, and thus spawned the defining moment for a weird and warped comic-book franchise.

“That tone was what everyone universally agreed was the epicenter of this world,” says Andy Serkis, director of the sequel “Venom: Let There Be Carnage.” “That is precisely the touchstone moment for where we started off with this.” 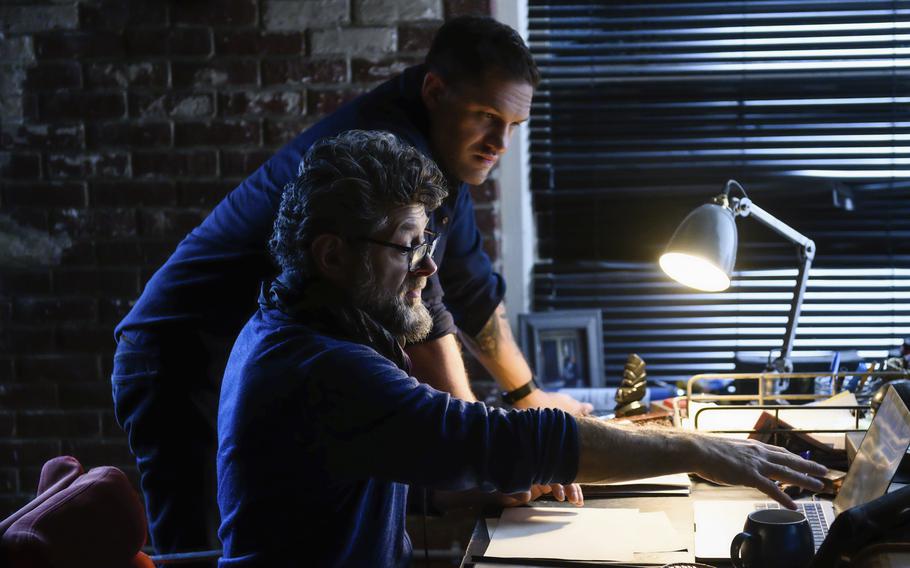 This image released by Sony Pictures shows Tom Hardy, background, and director Andy Serkis on the set of “Venom: Let There Be Carnage.” (Sony Pictures/AP)

“Venom: Let There Be Carnage,” which Sony will release in theaters Friday after a year’s delay due to the pandemic, extends what may the oddest superhero series around. The dominant conflict is less about world saving and more about a very odd couple cohering in one body. And given that the two lead parts are played by the same actor, it’s the comic-book film most centered on an actor’s freewheeling performance.

“What’s thrilling is to be able to delve through the human psyche and the paradox of the human condition and play them in a farcical, superhero action thriller,” says Hardy, speaking by phone from London. “The masks of Eddie Brock and Venom are larger than life, but they’re ultimately two sides of the same coin.”

In the dependable realm of superhero movies, the first “Venom” was somewhat of a risk. Venom is a relatively marginal Marvel character; the movies, Serkis says, are “swimming in the darker end of the Marvel pool.” But even though reviews weren’t very good, the film was a hit, grossing $856 million worldwide.

“When it came out, critics didn’t like it - which is fair enough - and the audience did like it. It did rather well, enough for Sony to make another one,” says Hardy. “We had to have a debrief and a wash up and say: What worked here? What didn’t work? What can we do better?”

For the sequel, Hardy took firmer control. On the first “Venom,” the actor has said some 30 minutes of scenes were left on the cutting-room floor. This time, he sought out Serkis, the actor-director best known for his extensive work in motion capture performance, to follow the original’s director, Ruben Fleischer. Hardy also took a hand in shaping the follow-up; he and Kelly Marcel (co-writer of “Venom”) are credited with the film’s story. Hardy is also a producer, a first for him on a feature film. 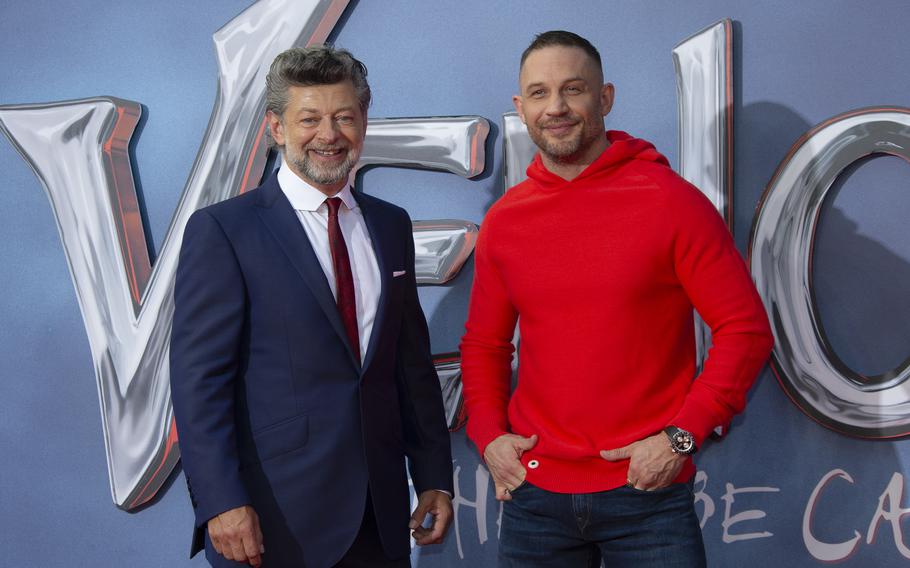 Actor Tom Hardy, right, and director Andy Serkis appear during a photo call for their film “Venom: Let There Be Carnage” at a screening in central London on Tuesday, Sept. 14, 2021. (Joel C Ryan, Invision/AP)

“Putting your hat in the ring is a logical step. We asked Sony, Kelly and I, if we could have a shot at pitching the second movie,” says Hardy. “And they said ‘Of course.’”

“Let There Be Carnage” takes a gothic turn, bringing Brock into the orbit of a serial killer, Cletus Kasaday (Woody Harrelson). Kasaday attracts his own symbiote, Carnage, enabling his prison escape. The sequel is also about Brock and Venom undergoing what Serkis calls “the seven-year-itch” in their relationship, as both yearn for independence. In one scene set to Louis Prima, Venom makes breakfast for Hardy to cheer him up.

On set, Hardy typically retreats to a corner to record his Venom lines, which are enhanced with a pitch-modulator. Then, while Hardy performs as Brock, Venom’s lines are played through an earpiece. Serkis calls Hardy’s system “mesmeric” to watch. To Hardy, acting against himself has become a familiar process.

“I’ve gotten used to seeing myself as a piece of meat and observing myself from outside as: What do I want to do with my vehicle? OK, Tom’s not working properly. What’s not working?” says Hardy.

“It may seem schizophrenic and I do appreciate that I do look mad when I’m doing it,” adds Hardy. “Hopefully you see it on screen as well — the frenetic, manic nature of someone judging two personalities.”

For Serkis, who directed 2018’s “Mowgli: Legend of the Jungle,” 2017’s “Breathe” and is prepping an adaptation of George Orwell’s “Animal Farm” for Netflix, it’s another twist in a shape-shifting career. Serkis, who revolutionized the use of motion capture in characters like Gollum in “The Lord of the Rings” and Caesar in “Rise of the Planet of the Apes,” has been increasingly drawn to the nexus of filmmaking and technology.

“What I’m really interested in is the future of storytelling, and how that is going to change over the next 10, 20, 30 years,” says Serkis. “At the moment, we’re standing at a junction. We’ve had a pandemic, which has forced people to watch things on a very small screen. But pretty sure we’re going to go back to what was beginning to burgeon before the pandemic.”

“Let There Be Carnage,” originally set for release last October, will be one of the bigger releases to launch only in theaters during the pandemic. After several delays, Sony moved up its release by a few weeks. “Venom” will effectively launch the fall movie season, with many carefully eyeing its performance.

“Now is definitely the time,” says Serkis. “There really is a moment here, because there are some big films coming out, and they’re daring to put their heads above the parapets.”