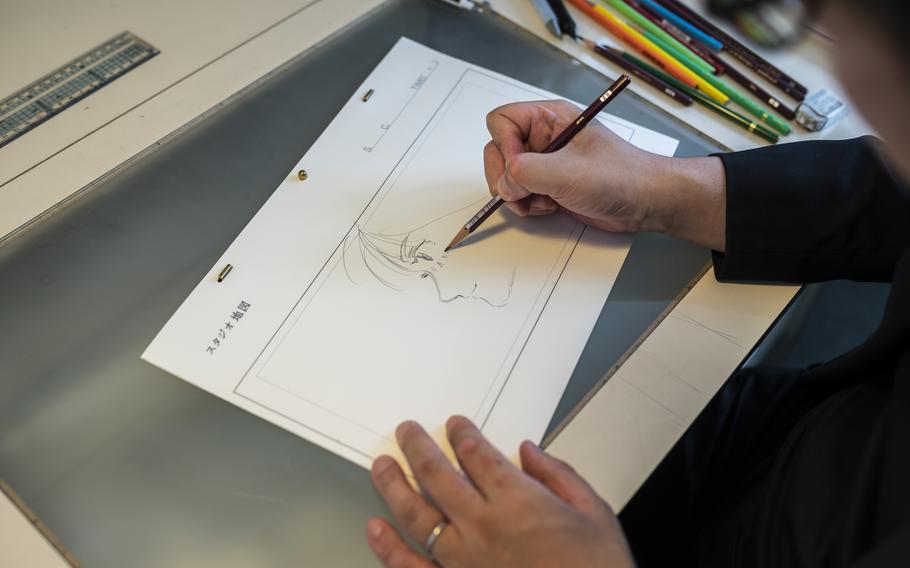 Mamoru Hosoda draws at his office in Studio Chizu in Tokyo on Sept. 9. (Shiho Fukada/For The Washington Post)

In her life in rural Japan, Suzu is a freckled and shy 17-year-old who is self-conscious about her looks and has lost her will to play music after her mom's death.

But in the virtual world, known as "U," she transforms into Belle, an enchanting global pop superstar with flowing pink hair and a mesmerizing facial design that resembles freckles.

The animated film "Belle" — a hit in Japan that will make its U.S. debut at the New York Film Festival on Sept. 25 — also carries a bit of artistic rebellion.

The film's message of female empowerment has gained attention for flipping the script on anime, Japan's signature style of animated movies and graphic novels that often portrays girls and women as weak, vacuous and hyper-sexualized.

The message has resonated in Japan during a time when growing numbers of women are calling for change — most recently laid bare through a string of sexist comments by high-ranking Olympic officials that drew fierce backlash. 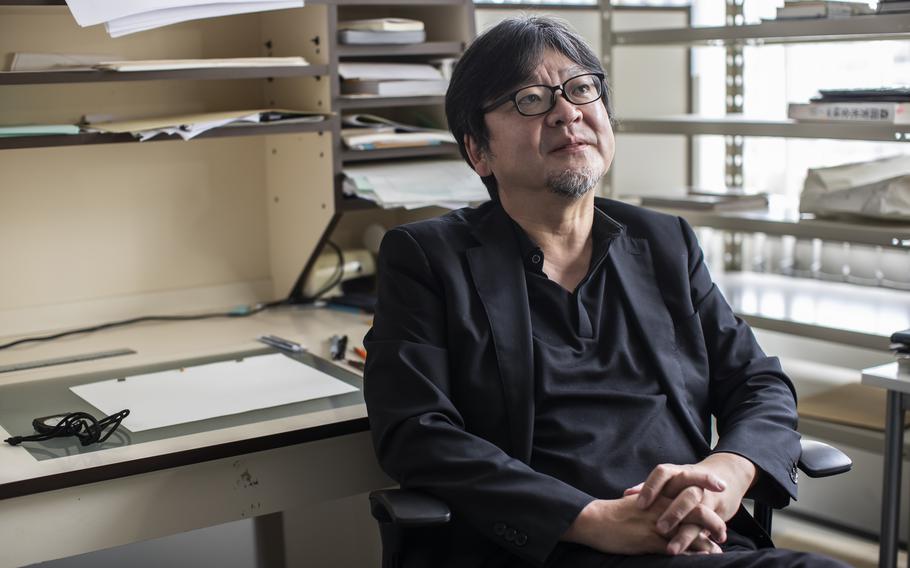 Director Mamoru Hosoda at his office in Tokyo on Sept. 9. (Shiho Fukada/For The Washington Post)

"I feel that women characters in Japanese anime are often depicted through a lens of desire leading to their sexual exploitation, and too much is brushed off as a freedom of expression," the film's director, Mamoru Hosoda, said during an interview earlier this month at Studio Chizu, his animation studio in the Tokyo suburbs.

From Disney princesses to Marvel superheroes, from anime to pop music, creators across genres are rethinking how to portray women and girls with agency and dignity, and show that being imperfect is beautiful, too. Global movements such as #MeToo have also underscored a sense of common purpose.

Hosoda said he hopes to draw attention to the ways that Japanese animation has shaped the public's perceptions of women and girls, and what it means to be beautiful and powerful.

"Such exploitation [has been] ... justified with the notion that it's happening in a fantasy world, and not in reality. But I feel that, surely, such perceptions are connected and will influence our reality," he added, as he sipped on coffee at his office, decorated with posters and figurines.

Japanese animation, which includes anime and manga, is among the country's biggest cultural exports and has become popularized through digital streaming services.

But problematic female representation in anime, especially in television shows aimed at men, has been a concern for gender equality advocates. Such depictions are both overt - exaggerated breasts and barely clothed girls - and subtle, such as story lines in which girls are damsels in distress and secondary to boys.

In recent years, directors such as Hosoda have sought to challenge views in Japanese society that can devalue women, said Akiko Sugawa, professor at Japan's Yokohama National University specializing in gender and anime studies.

"Anime has the power to create and break gender stereotypes," she said.

Sugawa said there is still much room for improvement, including the need for more women and LGBTQ anime directors.

"There are now more positive portrayals of LGBTQ characters, issues and works that pose questions about societal problems. And with the rise of more diverse directors and anime decision-makers, there's hope for more change to come," Sugawa said.

"Belle" is a modern twist on the Disney classic "Beauty and the Beast." After her mother dies while trying to save a child from danger, Suzu struggles to fit in at school. She joins the virtual world "U" as Belle, a talented performer with eye-catching outfits who instantaneously gains billions of followers.

With the computer savvy of her female best friend and the emotional support of her late mother's female friends, Suzu/Belle embarks on an adventure to help a mysterious beast. Along the way, Belle performs several songs that can now be heard throughout shopping districts of Tokyo. Since its release in July, "Belle" has become Japan's third-highest-grossing film this year. 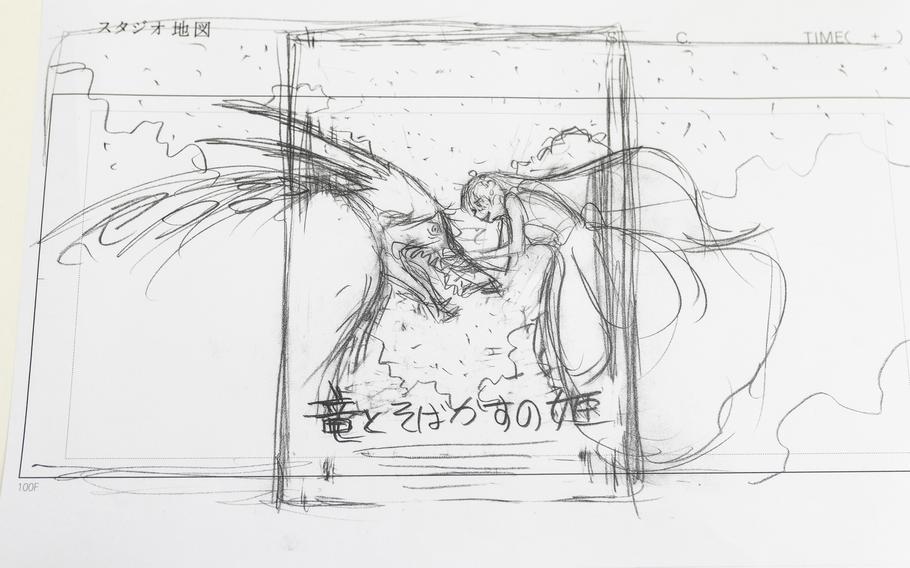 A sketch of the movie poster “Belle” at director Mamoru Hosoda’s studio in Tokyo. The film will make its U.S. debut at the New York Film Festival on Sept. 25. (Shiho Fukada/For The Washington Post)

In the movie, Hosoda seeks to give women and girls greater depth and humanity than is normally depicted in anime. Through Suzu/Belle, he juxtaposes the way that the inner beauty of Suzu and dynamism of Belle coexist in one person. For Suzu, an introverted teen, her online persona is not just an imagination or an escape, but rather a part of herself that she eventually grows into.

Hosoda said he wanted to give Belle more complexity, in the way the character of Beast in the original Disney movie was afforded that depth.

"Just like the beast having a duality, I wanted Belle to also have two sides and focus on how the two sides come to play, ultimately leading to her self-growth," he said.

Hosoda received a 14-minute standing ovation when his movie premiered at the Cannes Film Festival in July. Belle has been replicated by cosplayers, who dress up as anime characters. The animated character Belle "performed" the movie's title song at the Fuji Rock Festival last month.

On social media, Japanese fans have raved about the movie's positive message, stunning visuals and catchy tunes. "Those who are feeling difficulty in their lives, those who want to change but can't, I hope they see this film. It really helps you take a step forward," one person tweeted.

Hosoda, 53, has long focused on the cyber world in his works, including the film versions of "Digimon" in1999 and 2000 and from his earliest feature films such as "Summer Wars."

His movies, particularly in recent years, have depicted women and girls as independent and strong-willed characters, including the 2018 "Mirai,"a story about a boy who lashes out after his younger sister is born but learns the importance of family bonds. The movie earned Hosoda an Oscar nomination for best animated feature film.

But through "Belle," Hosoda has delivered perhaps his most explicit message about female empowerment and the power of technology as a force for good. He said he was inspired by his 5-year-old daughter, as he contemplates the future she will face growing up.

"She is still in preschool and is quite introverted, so I imagined how she was going to survive once she gets on social media and begins having all sorts of online interactions," he said.

Hosoda said he wanted to challenge the narratives warning against increasing reliance on the Internet.

"For the younger generation, the norm will be to live in both worlds and that both worlds are their realities," he said. "And the Internet plays a huge role for them to raise their voice and go out into the world."

"Belle" is scheduled to be released in U.S. theaters this winter.