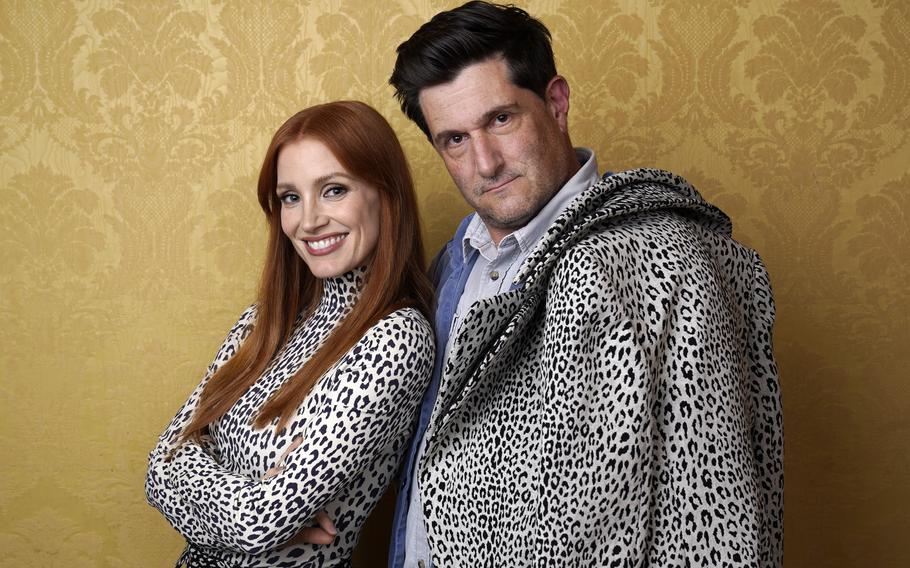 Jessica Chastain, left, the star of "The Eyes of Tammy Faye," poses for a portrait with director Michael Showalter during the 2021 Toronto International Film Festival on Sunday at the Royal Fairmont York in Toronto. (Chris Pizzello, Invision/AP)

In the nearly 10 years it took for Jessica Chastain to get made a film about the Christian televangelist Tammy Faye Messner, she studied many of the kinds of things you’d expect — the hours of television footage, Fenton Bailey and Randy Barbato’s 2000 documentary. But one of the most revelatory sources was a largely forgotten WB reality show from 2002.

By then, Messner had fallen from the heights of her televangelist fame after scandals brought down the multimillion-dollar ministry she and her longtime husband, Jim Bakker, built with the PTL (“Praise the Lord”) Network. So there she was on “The Surreal Life” alongside D-list celebrities like Vanilla Ice and adult film star Ron Jeremy, living in a Hollywood Hills mansion for two weeks.

“You’re thinking: What is this? I know they put her in there because they thought it would create a lot of drama. But it was a beautiful thing to watch,” says Chastain. “You saw her consistently being who she was, not judging anyone, but ministering to them.”

To Chastain, what stood out was Messner’s steadiness of faith. As much as the highly coiffed, heavily made-up televangelist’s appearance fluctuated over the years, Messner — whose finest moment may have been a 1985 show talking to gay minister and AIDS activist Steve Pieters about HIV — preached God’s love to everyone. Even Vanilla Ice. He later wrote a song about her.

“She just loved everyone, and she loved without judgment and she believed everyone was deserving of God’s grace,” Chastain said in a recent interview. “Now I wasn’t baptized. But I think that’s supposed to be what Christianity is about.”

In “The Eyes of Tammy Faye,” directed by Michael Showalter, which Searchlight Pictures releases in theaters Friday, Chastain gives perhaps the most ambitious performance of her career so far. For the widely admired actor of “The Tree of Life,” “Zero Dark Thirty” and “The Help,” it’s the first time she’s tackled a decades-spanning biopic with all the transformational trappings — the make-up, the prosthetics, the accent. It’s a big swing, one Chastain was hungry for.

“There were a number of reasons I wanted to do it,” says Chastain, who acquired the rights to adapt the documentary in 2012. “But number one was it was the scariest because it’s the most far-reaching.”

It was during the press tour for 2012’s “Zero Dark Thirty” that Chastain first caught the RuPaul-narrated doc on TV. At the time, it seemed like the furthest thing from her CIA operative in Kathryn Bigelow’s film. The documentary, while reveling in the kitsch of the Bakkers, sought to celebrate the much-parodied Messner, who died in 2007 at the age of 65.

At its most popular, “The PTL Club,” their flagship program, reached as many as 13 million households. Constant appeals for donations from viewers helped swell their ministry, including Heritage USA, a Disney-style theme park and resort in South Carolina.

But sex and financial scandal toppled their empire. Bakker (played by Andrew Garfield in the film) used ministry funds to pay a woman who said Bakker sexually assaulted her. (Bakker denied it.) He was convicted in 1989 of raising pledges with false promises while also steering millions to pay for the couple’s lavish lifestyle.

Messner, who filed for divorce while Bakker was imprisoned, was never indicted. But she took more lumps in public opinion. She was mocked on “Saturday Night Live.” Chastain recognized a complicated woman who was treated unfairly.

“I knew it was important for me in terms of gender, in terms of righting a wrong that I felt the media had done to her,” Chastain says. “We all had a collective memory that wasn’t accurate, including myself.”

“The Eyes of Tammy Faye” is the most dramatic film yet for Showalter, the comedian of “The State” who has developed a second career as a filmmaker. But his movies — “Wet Hot American Summer,” “My Name Is Doris,” “The Big Sick” — have also often blended surreal with painfully real.

“I really like characters that are out of step with the world,” says Showalter. “I think Tammy Faye is really compelling in that way. She was this sort of laughing stock but time has been really generous toward her. We’ve been able to look back and realize there was a much more authentic person there than we gave her credit for.”

The film spans three decades and some very drastic fluctuations in period style. That made it a particular challenge to make-up department head Linda Dowds, not just in charting Messner’s physical evolution, but keeping the extravagant looks from being too over-the-top.

“There are some characters that use make-up as a mask,” Dowds adds. “For Tammy, she said you don’t have to be dowdy to be a Christian. She never quite understood why people made fun of her look. She said: ‘This is me. This is what makes me happy. Whenever I feel a bit down, I just put more on.’”

The performance, flamboyant and empathetic, has immediately put Chastain into the Academy Awards conversation. She has twice before been nominated but never won. But it’s also extended a spiritual journey for Chastain, one that included Terence Malick’s cosmic existential wonder “The Tree of Life.” The religious passages, Madonna paintings and Bach that Malick fed her, she considers “a spiritual and faith-based course on love that I really had never had in my life.”

What Chastain perhaps most admires and connects with in Messner is her earnestness — she is who she is. That attitude is similar to how Chastain, who grew up humbly in Sacramento, California, has tried to navigate the movie industry. She’s been a vocal advocate for women, including in making the upcoming “The 355,” a female-led ensemble spy thriller. Chastain helped get it made when she noticed the lack of any action film like it. As with “Tammy Faye,” she’s a producer on it.

“Tammy Faye kind of approached everything with: Let’s have a good time. I think perhaps that’s how I try to approach things, too. I mean, listen, I’m always up for a fight,” Chastain says, laughing. “I just know everything is possible. Maybe we’re looking at it from a wrong angle. It may not be possible with an old formula or an old set of rules. So let’s do something else and make it possible. I never see a wall or a door.”