Reimagining the ‘scream teen’ genre for a binge generation 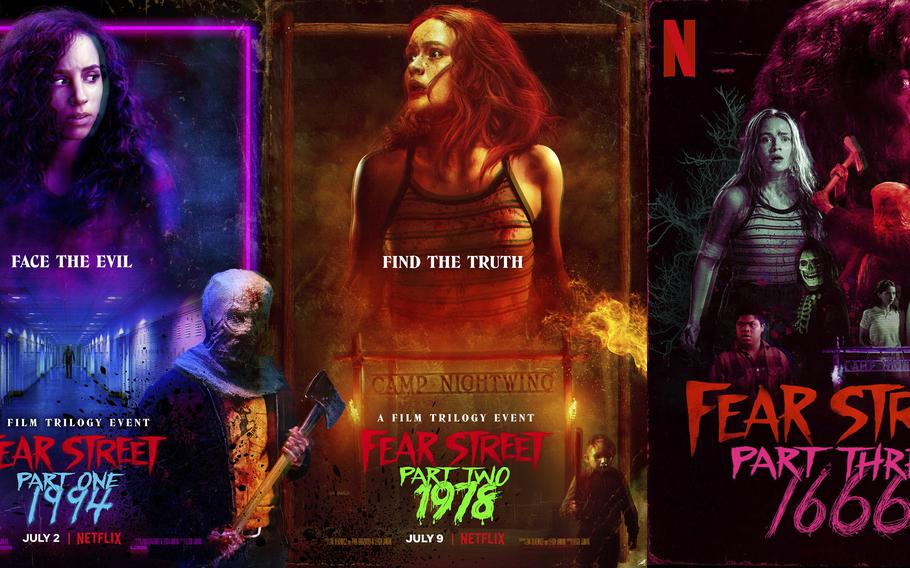 It’s not uncommon for Hollywood to stake a bet on a trilogy, or to even film several sequels at once. But it’s downright unheard of to release the entire thing in three consecutive weeks.

Yet unlike a traditional studio, that’s a gamble Netflix is able to take with director Leigh Janiak’s “Fear Street” films, three features based on R.L. Stine’s popular teenager slasher series. The first of which, “Fear Street Part 1: 1994,” about the strange happenings in the cursed town of Shadyside, Ohio, debuted July . This Friday, they go back in time even further, to 1978, and next Friday it rewinds all the way back to 1666. Some of the cast even appear in multiple films. The ambitious series takes on the roots of systemic oppression tied to this small town.

“I was personally obsessed with this idea of cycles of time, and history repeating itself and generational trauma. I was also a big fan of ‘Quantum Leap’ and ‘Back to the Future’ and I thought there was something that would be cool and satisfying to see characters who had experienced their own terrible events in the ’90s, in the ’70s and bring them back to the 1600s where their ancestors, or however you want to interpret it, experience something similar,” Janiak said. “What we ultimately ended up coming up was a hybrid of movies and what people think of more traditional television.”

“Fear Street” is also kicking off a new strategy for the streamer: Reviving the “scream teen” genre. Netflix saw massive success tapping into YA romance with franchises like “The Kissing Booth” and “To All the Boys I’ve Loved Before,” and is now turning its attention to another staple of teen moviegoing: The horror movie. The studio has several YA-geared horror films rolling out this year, including “There’s Someone Inside Your House,” from filmmaker Patrick Brice.

“We found really exciting and great success when we leaned into YA romance, a category that I loved growing up with John Hughes. It became really clear that’s a rich space for us,” said Lisa Nishimura, Netflix’s vice president of independent and documentary films. “We started to look at horror, which is just a classic storytelling arena. What Leigh has done with ‘Fear Street’ is taken that ambition and combined a lot of the best in storytelling. She’s modernized it through a lens of who gets to fall in love, who is represented on screen, who survives the first 15 minutes? If you look back at the history of horror movies, it tends to be the outsider. She’s re-defined what that looks like and feels like. And she’s done it in a way that’s remarkably fun.”

As the executive behind addictive docuseries like “Making a Murderer” and “Tiger King,” Nishimura has a preternatural ability to scout the next big thing in binge watching. Unlike YA rom-coms, horror movies are one of the few genres aside from superheroes that still generate significant ticket sales at the box office. But that doesn’t mean that streaming can’t get in on the game too with originals that both speak to a current generation of teens and adults nostalgic for the slashers of their youth. And Netflix may even open up the genre to new audiences.

“There are going to be many, many, many people for whom these movies are their first horror,” Nishimura said.

More are coming this fall, too, including “Night Teeth,” a nod to “youth-driven genre films” of the 1980s and 1990s like “The Lost Boys” and “Go,” that follows a chauffeur one bizarre night in Los Angeles, and “Nightbooks,” where Krysten Ritter plays a witch who traps a horror-obsessed boy in her New York apartment.

The mid-’90s teen horror renaissance was a formative experience for both Janiak and Brice, who remember being inspired by films like “Scream” and “I Know What You Did Last Summer.”

“Those are films that are completely dear to my heart. And, you know, you watch them again now and they’re still fun,” Brice said. “But there’s definitely aspects of them that feel a little dated.”

His film, “There’s Someone Inside Your House,” follows a high school senior who has uprooted her life from Hawaii to Nebraska, only to be terrorized by a killer who wants to expose her and her classmates secrets.

“When I read this script... I was just so struck by the intent of trying to make something that was both completely a hard R-slasher movie that’s trying to deliver great scares, but also where the relationships and the characters and the love story are given equal attention,” he added.

Janiak, who is married to “Stranger Things” co-creator Ross Duffer, also saw an opportunity. And she didn’t take for granted the Netflix reach. The streamer currently boasts over 200 million memberships in 190 countries.

“(Horror) is kind of like the weird stepchild of kind of the film world. And it’s I think it’s ridiculous,” Janiak said. “Horror more than any other genre offers these opportunities to kind of make big popcorn-y, fun movies and have them still be about something.”

Janiak recommends watching the “Fear Street” movies as they come out, and to then go back and do a “full binge” to catch all the Easter eggs. Brice envisions a group viewing.

“I see a group of fully vaccinated teenagers all hanging out, hiding under the covers together, watching this movie,” Brice said. “I truly think this movie speaks to the collective experience of going to see a movie.”