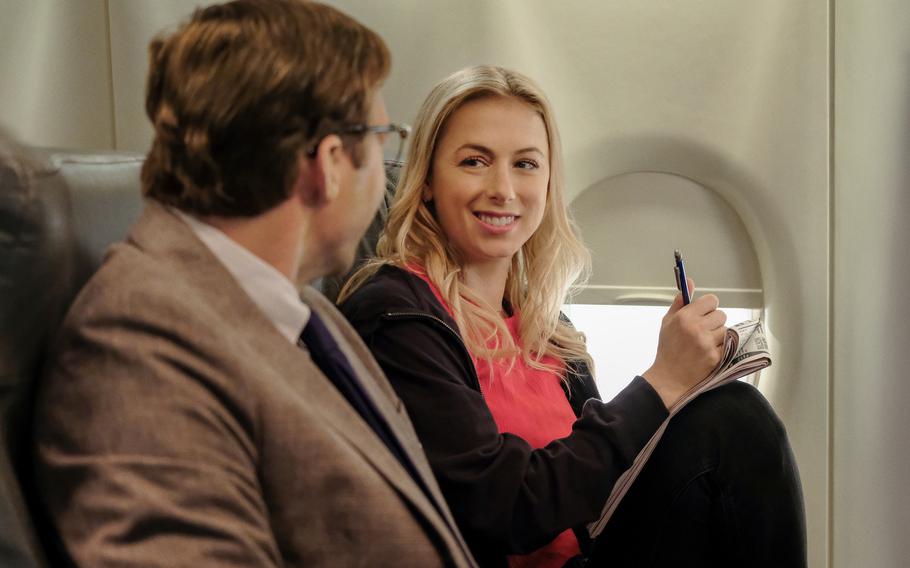 From left: Ryan Hansen as Dennis Kelly and Iliza Shlesinger as Andrea Singer in “Good on Paper.” (Alex Lombardi/Netflix)

The real-life story behind Iliza Shlesinger’s new comedy movie is no joke.

The stand-up comic and actress wrote and starred in “Good on Paper” after she found out a man in her life was fabricating facts about himself.

“We were friends for about a year,” Shlesinger told the Daily News. “A little bit after a year, we dated for about three months. It was only at the end of that, that I started to put together he had lied about every single thing since the day I met him.”

Now on Netflix, “Good on Paper” stars Shlesinger as a stand-up comic who hits it off with a man she meets on a plane. Her character, Andrea Singer, eventually falls for Dennis Kelly — played by Ryan Hansen — who claims he’s a Yale University-educated hedge fund honcho taking care of his ailing mother.

Shlesinger, 38, says about two-thirds of the “Good on Paper” script reflects exactly what she experienced with a man she was with in her early 30s.

“As an artist, and especially as a comic, whenever bad things happen, whenever life happens, it’s my job to get up there and talk about it, process it and make things relatable,” Shlesinger said. “This was so heavy, and it so stopped me in my tracks, so my cathartic way of processing it was to write it in a script.”

The film is directed by Kimmy Gatewood.

“Andrea is unrepresented in most movies, and what’s crazy is that she’s more like the average woman than movies give us credit for,” Shlesinger said. “She is just a normal girl who is working her way through life, works on her career, loves her friends and kind of gets something that she doesn’t deserve.

“Women are so quickly labeled as strong because they merely have a job and have goals in life and ambitions, whereas she’s actually quite normal. She’s more like a normal girl than we see in romantic comedies. She’s not hapless. ... She didn’t need any saving.”

Shlesinger expects some viewers will also relate to Andrea’s experiences.

“I think it’ll create a conversation about these sort of lying sociopaths that walk among us, because it was only in sharing the stories that so many people reached out to me and said, ‘Oh my God, I know a guy like this. I dated a girl like this. This is my roommate. This is my cousin,’” Shlesinger said.

Shlesinger, who has five-stand up specials on Netflix, began her comedy career in her early 20s but has had success with movies in recent years as well, including roles in 2019′s “Spenser Confidential” and 2020′s “Pieces of a Woman.”

She said she enjoyed writing a character for herself while telling a tale filled with twists and turns.

“The more I worked on it, the more it became less about the anger and more about the nuance, and the comedy, and the world and the characters,” Shlesinger said. “I just felt this was a unique story. Not a lot of crazy things happen to me, but I just felt that this was such an insane story that I had to get it out.”