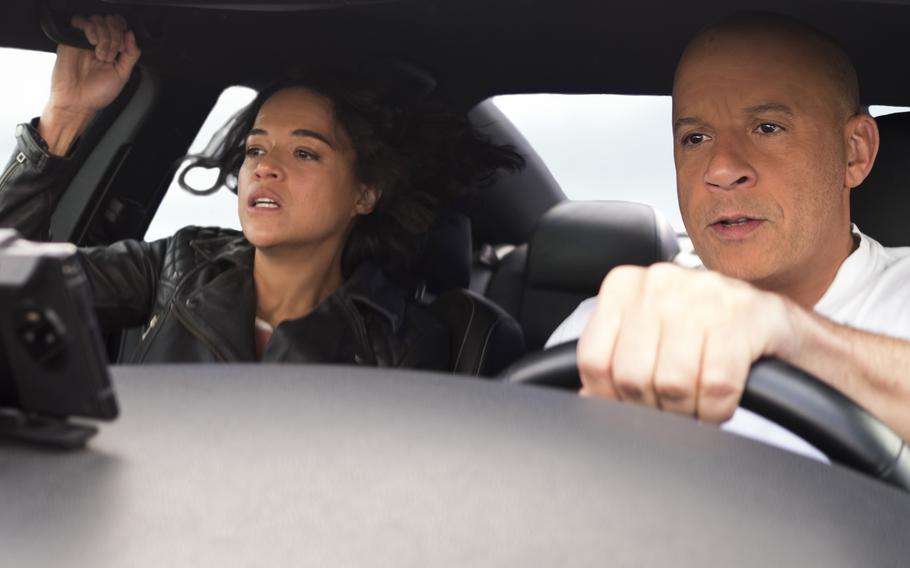 Michelle Rodriguez, left, and Vin Diesel are two of the many action stars in “F9: The Fast Saga.” (Universal Pictures/AP)

What a ride it’s been for the “The Fast and the Furious” franchise. Now spanning 20 years and nine films, this soap opera of motor fuel and melodrama has defied logic, physics and death again and again while weaving an intricate tapestry of a cinematic text that’s filled with callbacks, cameos and a deep-rooted lore that always returns to the intertwining values of family and vintage American muscle cars.

Director Justin Lin, who also helmed the third, fourth, fifth and sixth films in the series, and evolved the franchise from minor street racing thrillers into outlandish displays of car ballet, is back behind the camera for “F9: The Fast Saga” (he also co-wrote the screenplay with Daniel Casey). Lin ups his own ante with the outrageous vehicular stunts in “F9,” and it’s hard to imagine any future installments exceeding the automobile acrobatics Lin and Casey have concocted. To describe the stunts and set pieces would be to ruin the fun of discovery for audiences; suffice to say there will be moments where you’ll say, “they won’t …” but rest assured: they will, and how.

Narratively, “F9” does something no other “Fast” film has done before: it looks to the past. In a flashback storyline that takes place in 1989, we finally meet young Dominic Toretto (Vinnie Bennett and of course, later, Vin Diesel) and learn more about the infamous vengeful wrench attack that landed him in prison, a crime that’s been oft mentioned throughout the series. The flashback is a way of exploring some of the darker secrets of the Toretto family, specifically regarding prodigal brother Jakob (Finn Cole and John Cena), who resurfaces in Dom’s life. Turns out he’s another freelance precision driver/special agent, who frequently works with Dom’s (many) enemies. What are the odds?

With Jakob’s return, Dom has to reckon with his past, and the dissolution of his blood family, which he replaced with his chosen family. This motley crew of gearheads we’ve come to know and love over the years includes the fast-talking Roman (Tyrese Gibson), techy Tej (Chris “Ludacris” Bridges), Dom’s love Letty (Michelle Rodriguez), his sister Mia (Jordana Brewster), and amazingly, against all odds, fan favorite Han (Sung Kang) is back, returned from the dead, in an especially spine-tingling resurrection.

That’s not to say that the gang’s all here, as Paul Walker’s tragic 2013 death means Brian is absent, but within the earnest optimism of the “Fast” franchise, Brian is immortal, unseen but alive and well in this universe. This question of immortality and the family’s seemingly invincible nature is explored in a meta way in “F9,” especially by Roman, who has always served as a bit of an audience surrogate. He gapes at and complains about the ridiculous stunts, offering sly commentary on the inexplicable occurrences as a way of getting out in front of the inevitable disbelief. In this film, he questions why they always come out of brawls, crashes and explosions unscathed, an apt question to pose after eight spine-crunching installments.

While it is the ridiculous set-pieces in “F9” that take the franchise soaring to new heights, it’s the meta moments and the willingness to dive into the past in a real way that make this movie innovative within its own formula. In fact, the flashbacks are so enjoyable, it makes the argument for any stand-alone period-set prequel.

In “F9: The Fast Saga,” all of the “Fast” franchise’s soapy narrative peccadilloes come to fruition, from secret siblings, to death-defying characters, to the stable of “Scooby Doo” villains out to get Dom’s family (Charlize Theron returns as evil hacker Cipher). The absolutely bonkers storyline is the foundation for the absolutely bonkers action, which is what we look to the “Fast” franchise for. In “F9: The Fast Saga,” bonkers on top of bonkers results in a truly delightful and vividly sensorial time at the movies.