'Cruella' co-star Paul Walter Hauser's belief in himself is contagious 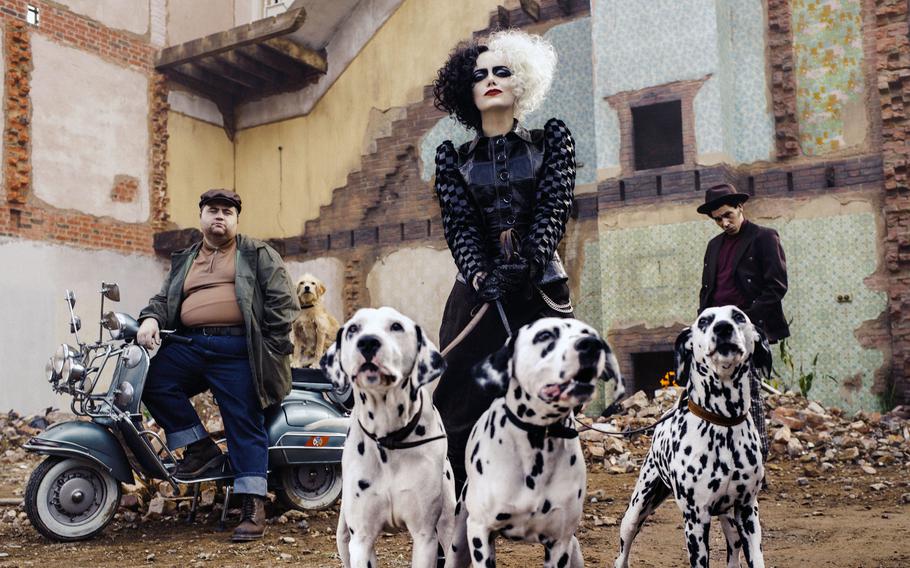 This image released by Disney shows Paul Walter Hauser, from left, Emma Stone and Joel Fry in a scene from “Cruella.” (Disney/AP)

“I would literally review our school plays, even if I was in them, which is terrible,” says the actor, who hails from Saginaw, Michigan. “I’d do it tongue-in-cheek, stupidly. I would be like, ‘there’s this great actor named Paul Hauser in this play, and he really steals the show!’”

These days the reviews are similar, but they’re actually coming from others.

The 34-year-old has been earning effusive praise since his mainstream breakthrough as a doofus criminal in 2017’s Tonya Harding bio-comedy “I, Tonya.” He’s since turned heads in projects ranging from the streaming smash “Cobra Kai” to Spike Lee’s “BlacKkKlansman” and “Da 5 Bloods” to Clint Eastwood’s “Richard Jewell,” in which he starred as the security guard turned bombing suspect at the 1996 Summer Olympics games.

Whether it’s reviewing his own work or carving his own path in Hollywood, Hauser’s key has always been confidence.

“You’ve just gotta be really loud and believe in yourself, and then everybody blindly starts believing in you as well,” says Hauser, during a Zoom chat earlier this month from New Orleans, where he’s filming his latest project. “Confidence is very contagious. Somebody reflects a trait with a lot of confidence, and everybody goes, ‘yeah, you’re a unicorn because you told me you’re a unicorn, not because there’s a horn in the middle of your head.’”

If Hauser is a unicorn in Hollywood, his power comes from his ability to find the humanity and the sadness in the funny, says Craig Gillespie, who directed Hauser in both “Cruella” and “I, Tonya.”

“When he came in and read for ‘I, Tonya,’ there wasn’t a second choice,” says the director, on the phone last week. “He has this amazing ability to be funny, but to find the pain and the suffering that can come along with comedy. He does it in the most effortless way, and I love that it’s always more complex than what’s written and what he’s actually saying.”

Hauser — whose thick Cockney accent in “Cruella” is inspired by Bob Hoskins’ accent in “Hook,” which he used to imitate as a 12-year-old — was excited to reteam with Gillespie after things worked out so well on “I, Tonya.” He says he actively seeks out “repeat business” with directors with whom he clicks.

“When I get along really well with a director, I secretly kind of stalk their IMDb filmography page and I’m always hoping to work with them again, because we found the magic once before,” says Hauser. “I don’t know why the Coen Brothers use John Goodman so much, but I have to imagine it’s because he’s funny, he’s really talented and they get along and hopefully love each other, so I’m I’m trying to do the same thing. I try to love on everybody I work with, and some people get it and then other people don’t, and that’s OK, too. That’s just how the world works.”

Gillespie says he wasn’t able to find a way to squeeze Hauser into his upcoming “Pam & Tommy” series, but he plans to keep Hauser in mind for future roles.

“Paul is such a beautiful human being. He has such a big heart, and he’s so empathetic to the world around him,” says Gillespie, 53. “I think you can see that in his performances, and that’s that part of him, that humanity, that people love about him. And it’s all real.”

Hauser grew up in a deeply religious household, the third of four children.

At Saginaw’s Valley Lutheran High, he was he Max Fischer of his high school, he says, comparing himself to the overachieving underachiever at the center of Wes Anderson’s “Rushmore.”

“I was getting C- grades, but I was popular and I did about five to 10 extracurricular activities every year,” he says. He was even class president two of his four years, which he said was a direct reflection of his ability to make others believe in him.

Now he’s ready to use those same abilities to realign perceptions of the way he’s viewed in Hollywood.

Hauser recently shed 40 pounds — he’s been practicing DDP Yoga, the workout regimen founded by pro wrestler Diamond Dallas Page — and he says he’s close to his goal of fitting into large-size T-shirts and 34-inch-waist pants. He’d ultimately like to lose 100 pounds, and while he admits he misses Taco Bell and the indulgence of Jeni’s Splendid Ice Creams, the benefits outweigh the cravings.

“I’m really happy to try to get a little bit healthier and open up to some more roles, maybe action films or rom-coms or something where I get seen in a new light,” says Hauser, who is currently filming “In With the Devil,” a six-part limited series for AppleTV+ in which he stars as a convicted murderer alongside “Rocket Man’s” Taron Egerton.

He’s never made any secret about going after what he wanted, whether that has meant lobbying for jobs on social media — he’s open about his desire to join the Marvel Cinematic Universe or appear in a Batman movie — or trying to will his dream project, a film about the professional wrestling stable the Four Horsemen alongside his “I, Tonya” co-star and pal Sebastian Stan, into existence. (Hauser sees himself as Arn Anderson and Stan as the limousine ridin’, jet flyin’ Ric Flair.)

“Sometimes I put too many things out into the universe, I try to manifest, and I think to some people it looks thirsty or pathetic,” says Hauser. “But they’ve gotta remember this is my childhood dream and I’m living it out every week of my career and my life, so it’s hard not to geek out.”