How does a 63-year-old play a teen in Broadway musical “Kimberly Akimbo?” In Victoria Clark’s case, superbly 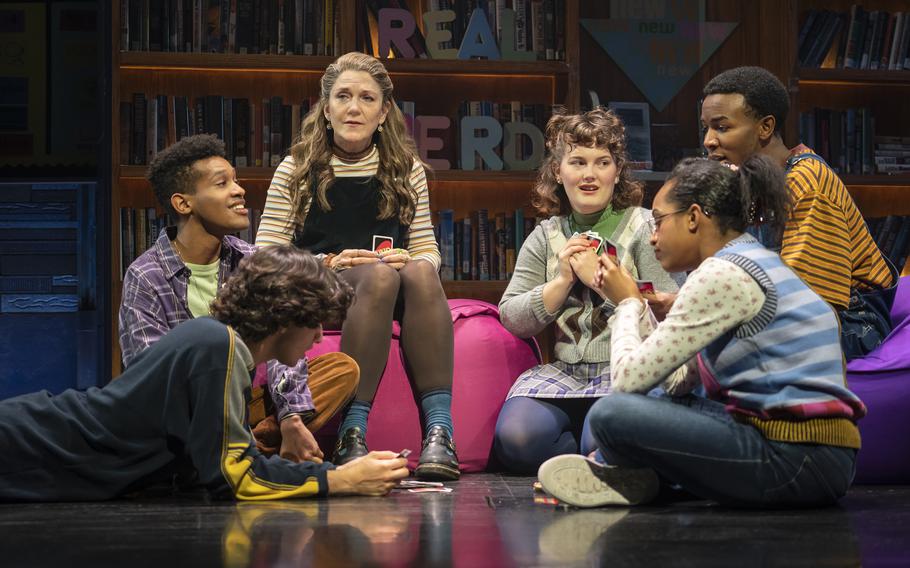 NEW YORK — They met as a veteran Tony Award-winning actress in her early 60s and an unknown from Kansas City, Kan., in his late teens, making his professional debut. Almost immediately, they were required to forge something remarkable: a believable relationship as 15-year-old friends in a musical about a girl who grows old too quickly, and a boy who has to grow up fast.

And to an astonishingly convincing degree, Victoria Clark and Justin Cooley are accomplishing this nightly at the Booth Theatre, in “Kimberly Akimbo,” a show not only conquering Broadway hearts but also shaping up as a favorite come awards time this spring. Their connection forms the vital emotional core of the musical by dramatist David Lindsay-Abaire and composer Jeanine Tesori, adapted from Lindsay-Abaire’s play, about a New Jersey teenager in 1999 with an illness that ages her four times as fast as normal.

“Whatever the chemistry is between these two actors,” Lindsay-Abaire says, “it’s making the audience believe: Yes, these two very different but weirdly similar people belong together.”

Without that essential belief — that we see Clark’s Kimberly as a typically acting atypical kid, and that Cooley’s Seth sees her as girlfriend material — the musical might feel like a precious gimmick. The rhapsodic reviews suggest otherwise: A “heartbreaking new nerdical,” the New York Times teasingly proclaimed it. The New Yorker said it was “howlingly funny, hopscotching among emotions with virtuosic fluidity.”

But it all starts with Clark, who offers up one of the most affectingly permeable portrayals of adolescence I’ve ever encountered on a stage. Her work strikes that chord, too, for 19-year-old Cooley, who earned the role of nerdy Seth after being a finalist in 2021 for the Jimmy Awards, the national high school musical theater contest.

“When you drop into Kim, you are so unpredictable and realistic and authentic as a teenager.” This is Cooley talking to Clark, during a joint interview in a subterranean lobby of the Booth. “It was like a callback to where I was not too long ago, and really allowed me to bring my guard down and just see this friend who I wanted to pursue,” Cooley continues. “I wasn’t scared of the actress; I wasn’t scared of the co-worker. I just saw an interesting girl that I wanted to be friends with.”

It seems such an ideal distillation of a protean art, to be able to create the illusion of youth without camouflaging age.

“I’m almost the same age as some of these kids’ grandparents. I’m way older than or significantly older than their parents,” Clark says of her cast mates. The only aesthetic adjustments are supplied by costume designer Sarah Laux, who outfits Kimberly in jeans and denim jumpers and long-sleeved tops layered under short-sleeved dresses. (David Zinn’s rendering of Kimberly’s room, adorned with maps and photos and strings of lights, assists as well.)

The rest is up to Clark, who seems to slip into a 15-going-on-16-year-old version of herself, as if that were on a hanger in her dressing room, too.

“I don’t sit down and study, you know, like teenage behavior or any of that stuff,” she says. “I just kind of try to remember as much as possible what my body felt like.” She does admit, though, to the occasional glance around at the style of kids in the city.

“Sometimes a teenager will catch my eye,” Clark says. “And I’ll just watch them. Like get off the elevator, the subway, or I’ll like see a bunch of girlfriends talking.” In the lobby of her apartment building, she went up to one teenager “because she was wearing Doc Martens, which Kim wears. And she had these bell-bottom jeans that were super interesting. And she had dyed her hair, part of it was purple” — which Clark had done, during the off-Broadway debut run of “Kimberly” at Atlantic Theater Company. “I was just kind of like, okay, there’s a modern version of Kimberly. I feel like she’s everyone.”

The disease that afflicts Kimberly, which is said to end lives at about 16, is never named; Lindsay-Abaire says he intentionally leaves that up in the air. Her home life is another source of grief, particularly as Kimberly is portrayed as a parent to her parents, who can’t cope with their daughter’s condition. The musical plays constantly with upending our notions of maturity and immaturity — even, it seems, in the casting.

As Lindsay-Abaire notes in a Zoom interview with Tesori and Stone, the temperaments of Clark and Cooley turn out to be almost eerily apt.

“Justin is young and he’s open, but he’s also so incredibly centered. And he gives off this old-soul energy, you know, there is something wise about him,” he says. “Like I remember looking over at him often in rehearsals, and he had this sort of placid, beatific look on his face. I think Jesus — like the Dalai Lama! And then I just as often think, nope, that is the look that my teenage son gives me when he’s stopped listening.”

“Conversely, Vicky, who is our most, let’s say, experienced actor in the cast,” Lindsay-Abaire adds, “also has this amazing youthful spirit about her, in the sort of gangly goofiness that makes her fit in perfectly with those teenagers.”

It’s no myth that actors who portray close comrades, or even couples, sometimes come to loathe each other in real life. (I’ve heard stories.) But the mentoring role Clark has assumed, and the eagerness of Cooley to seize this extraordinary opportunity, seem to have strengthened their collaboration. Putting off college, Cooley arrived in New York with raw talent and little knowledge of what was to come — “I never thought of myself as a professional Broadway kid,” he says. He quickly found a sympathetic rather than intimidating colleague in Clark, who won a Tony for best actress in a musical in 2005 for a wildly different performance, as the prim mother of a daughter with a mental disability in “The Light in the Piazza.”

“The first day we were up on our feet after we’d done our book work, and sitting on the table, I started improvising with him,” Clark recalls, of their early rehearsals. (“Kimberly” began performances at the Atlantic in November 2021 and transferred to Broadway a year later.) “So I just started talking to him off-script, I was like, ‘Hey, do you have chips?’ or like, I gave him a bag of tortilla chips and I’m like, ‘This is my snack and now you’re going to like sell it back to me.’”

The memory cracks Cooley up; he admits he had no idea what Clark was up to. “I wasn’t like, in the world of just playing,” he says, cackling. Soon, though, he recognized in Clark a kindred spirit.

“You said about this role, that it allowed you to bring a silly part of yourself you don’t normally bring to work,” Cooley says to Clark. “And you just came in and pulled that — the pureness, the childishness — out of me. And allowed me to feel comfortable.”

Of course, the indelibly moving aspect of “Kimberly Akimbo” is the awareness that time is ticking down for Kimberly; the musical’s joyful moments are tempered by that knowledge. Cooley says Stone helped them deal with the sadness by advising them to focus on the short term, on what their characters get to share as the show ends. “We’re so excited about what’s right ahead of Kim and Seth,” Cooley says.

“A life lesson, right?” Clark adds. “Like to live here. And that’s what this show is about. And, I mean, I do break down. I break down all the time. The first time I did a complete show at the Atlantic I came home and just collapsed on the floor and sobbed for 20 minutes. My husband didn’t even know what to do with me. He was like, ‘Do I hold you?’ and I was like, ‘I don’t know.’ Because I was crying for Kim.”

Cooley looks over at Clark and smiles. “And that’s the whole idea of this show,” he says. “We are going to cry. And then we’re just going to pick up and keep trudging on.”