José Andrés and his daughters eat their way through Spain 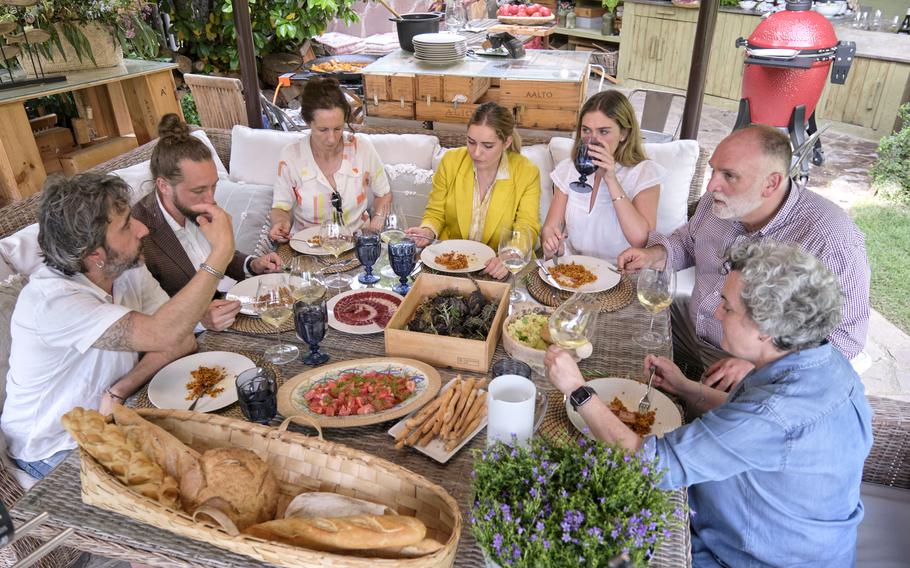 José Andrés, second from right, and family dine with friends at Pepe Muñoz (right)’s house in a scene from the Discovery+ television series “José Andrés and Family in Spain.”  (Discovery/AP)

On his new TV show, celebrated chef José Andrés goes into a restaurant kitchen in Spain and confronts a massive moray eel. Only one of them is leaving that kitchen intact.

Andrés oversees as cooks prepare the eel for its final flourish — deboned, sliced paper thin, dredged in three kinds of flour and then deep fried with cilantro.

“People of the world, I know you don’t usually eat eel. But if you try it, you will love it,” he says to the viewers. “Nothing can be more simple and more sophisticated at the same time.”

That eel is part of just one delicious moment in Discovery+’s “José Andrés and Family in Spain,” which follows the chef, restaurateur and humanitarian on a food tour through his homeland with his three American-raised daughters, Carlota, Inés and Lucia Andrés.

The ladies join their dad as they visit such places as Barcelona, Madrid, Andalusia, Valencia, the Canary Islands and Asturias, where he was born and where the food, he says, made him who he is. It’s a travel show, a cooking show and a parenting show, all wrapped up in a celebration of Spain and proud fatherhood.

“I think going with my dad and going to all of these places was just so special because he’s such a curious person,” Carlota says in a recent interview with her dad at The Bazaar, the elder Andrés’ rooftop bar at the The Ritz-Carlton in New York. “That’s the type of person that he is and no trip is the same if he’s not there.”

Throughout is José’s infectious and ebullient spirit, a whirlwind of passion for food and respect for where it came from. He cheers both the deconstructive brilliance of august restaurant El Bulli and also humble street food.

Tapas turns out to be a perfect reflection of his philosophy on eating — going from place to place eating many things, cold and hot, fish and meat and vegetables — and making it a celebration of ingredients, hard work and life.

“If I was the president of the world, I would make it mandatory that every person has to go around the world for a year of their lives — country to country, culture to culture, continent to continent. If we all did that, the world would be a magical place. That’s what this show celebrates,” he says.

In Barcelona, José and his daughters ride electric scooters around the city, popping into restaurants, markets and cafes as he bearhugs his old culinary friends, offering a delicious insider tour that involves tapas, red shrimp, sparkling wine and croquettes. 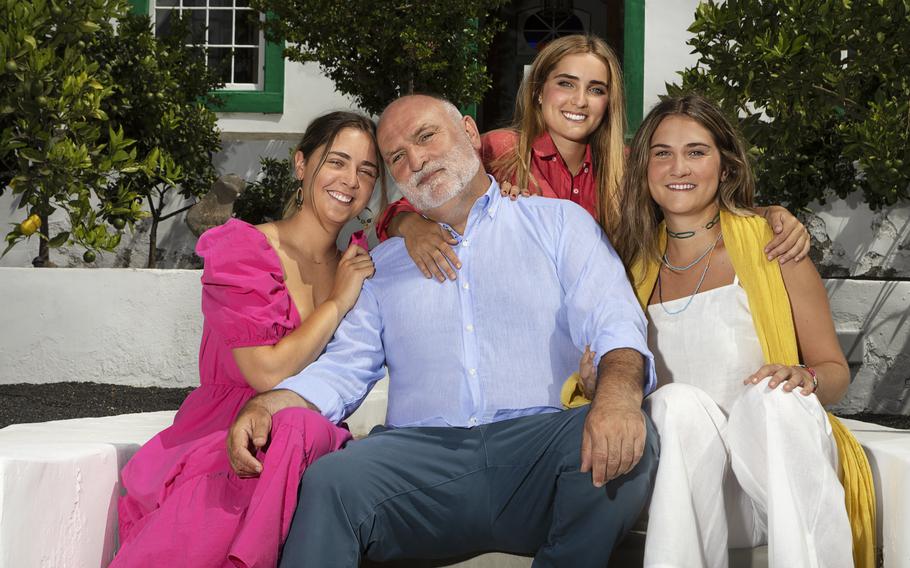 The elder Andrés — who has drawn attention to Spanish food and helped put a spotlight on humanitarian disasters with his World Central Kitchen — can hardily contain himself.

“He’s already in the kitchen causing mayhem,” one of his daughters comments.

In Andalusia, they drink the celebrated summer vegetable soup gazpacho and try various dishes, highlighting blue-fin tuna, a local delicacy. They celebrate the North African influence on the region in dishes like ham and eggs with artichoke and with grilled lamb skewers.

“Happiness happens when you mix different people and different colors and different places all in one plate,” José says on screen. In another moment, he offers this wonderful challenge: “Tell me what you eat, and I will tell you who you are.”

There is flamenco dancing, and a trip to buy sweet treats baked by secretive, cloistered nuns — dubbed the family’s “spiritual cookie moment.” The daughters try their hand at making churros and later a shrimp fritter called Tortillitas de camarones. They milk goats, harvest salt from tide pools, paraglide and scuba dive for goose barnacles, known in Spain as percebes.

During it all, José is a hype man for Spanish cuisine, playfully arguing that surf and turf, pizza, open-faced sandwiches called tostas and beer were all concocted in his native land, and that Spanish versions of crème brûlée and prosciutto are vastly superior to other countries’ versions. “Everything was invented in Spain!” he shouts.

“I think every culture needs to be proud of who they are and even chauvinistic about it. In my case, sometimes I take it to the extreme,” he explains later. “Defend your own, defend what you know. In a way, you’re celebrating everybody else.”

Spicy potato dish patatas bravas, glasses of sangria and pyramids of royal pastries were on the menu in Madrid, while Valencia offered the travelers the world’s best paella.

The family hopes that the series will inspire other families to go out and explore, especially after the pandemic.

“Spain is the excuse,” José says. “Sometimes we have the most exciting things in front of our eyes.

“You can go into the Chesapeake Bay and have an amazing moment of discovery. You can go to Virginia and discover the wine country of Virginia. Everybody thinks that you have to go to the most remote parts of your world. The excitement is not in the places. The excitement is within yourself.”