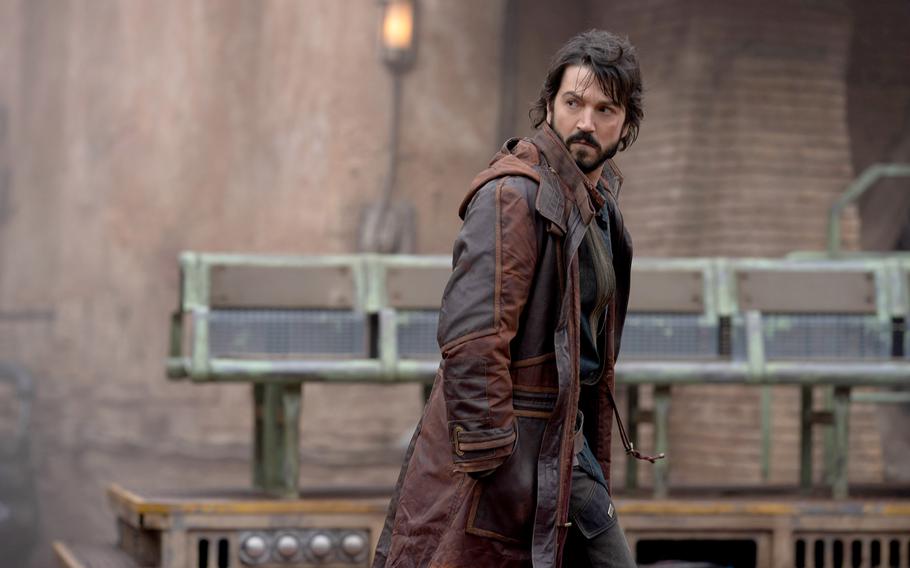 Diego Luna returns to the role of Cassian Andor in “Andor” on Disney+. (Lucasfilm Ltd.)

Diego Luna always assumed his debut in the world of "Star Wars" was a one-and-done deal.

But his comeback began this week in "Andor," which started streaming the first of its two planned seasons with a three-episode premiere Wednesday on Disney+. The series, which tells the backstory of Luna's character, shows just how far "Star Wars" has come since he appeared in 2016's "Rogue One." It's now an ever-expanding streaming universe, and one that is part of a surge of Latino representation in geek culture on-screen.

The acclaimed Mexican actor, known for roles in the 2001 film "Y tu Mamá También" and the Netflix series "Narcos," played the charismatic rebel spy Cassian Andor in the prequel to the original "Star Wars." "Andor" will serve as a prequel as well, taking place before the events of "Rogue One."

While filming "Rogue One," Luna controled his nerves despite entering a world he'd admired since his childhood by telling himself it would be a singular experience. That was because he knew he was a dead man.

He was there to bring to life one of the most meaningful deaths ever to happen in a "Star Wars" story, as his character was part of a team on a suicide mission that helps save the galaxy from an evil empire. During news conferences for "Rogue One," Luna recalls, he was asked frequently just how long he'd stick around in the "Star Wars" neighborhood. All he could do was smile and try not to ruin the ending of the movie for everyone.

"It helped me a lot to come into this universe of 'Star Wars' feeling kind of like I was in control," Luna said in a recent interview. "It was close to what I have been doing my whole life. I was going to be a part of one film. It had a beginning and an end. My experience was going to be one."

"Rogue One" was a billion-dollar hit at the worldwide box office. In the at-times polarizing "Star Wars" film renaissance after Disney purchased Lucasfilm for $4 billion in 2012, the film was a shining beacon of quality storytelling. With its darker tones and bigger stakes, "Rogue One" was a "Star Wars" movie so good it didn't need lightsabers but gave fans one anyway with one of Darth Vader's greatest cinematic moments at the end of the film. But with so many major characters dying, the only way to capitalize on "Star Wars" fans' goodwill toward the film was to look to the past.

Luna's return to "Star Wars" in "Andor" started to take form when Lucasfilm President Kathleen Kennedy wanted to give Luna's character his own series. She reached out to Tony Gilroy, who had been instrumental in "Rogue One's" success after coming in to assist director Gareth Edwards with the film's controversial reshoots, and asked him if he was interested in being a part of it. But in Disney's non-streaming world pre-2019, the ideas Gilroy came up with seemed too costly and ambitious for television. He still left numerous notes and memos with Lucasfilm detailing how he thought it could succeed.

Disney+ happened. "The Mandalorian" happened. Its creator, Jon Favreau, and executive producer, Dave Filoni, happened. And the world, and how you could tell a "Star Wars" story in it, changed. Suddenly Gilroy's impossible-to-achieve notes were looking quite doable.

Luna shared in the enthusiasm.

"When I got the phone call about exploring the opportunity of doing this prequel, to explore the past of this character, I thought it made complete sense, to be honest," Luna said. "For me 'Rogue One' is a beautiful film that shows you what these characters are capable of, but you don't get to know much about Cassian. Where he comes from? What triggers that confidence and commitment for the cause in him?"

In "Andor," the story of Cassian Andor's rookie rebel days are supplemented with flashbacks to the character's youth on his home planet of Kenari. The Kenari people don't speak Basic (the "Star Wars" term for English) and their culture is severely impacted by the arrival of the empire, forcing Andor unwillingly down the path to legendary "Star Wars" status.

"He's a refugee," Luna says of Andor's origin story. "He's a man forced to migrate and has to leave everything behind. And there's a hint of that in 'Rogue One.' No one has his accent. Clearly, he comes from somewhere no one else has come from ... we're talking about marginalized communities. We're talking about [what] oppression looks like. And obviously, there is a lot of parallels you can establish with the world [we] live in."

There is a sense of galactic Indigenous uprooting and imperial colonization within "Andor's" Kenari flashbacks. Gilroy, the series showrunner, says those flashback moments on-screen evolved from the first question he asked himself when pondering a look into Cassian Andor's past. He wanted to know just what kind of horrific moment makes a kid want to grow up to help destroy an empire.

"My original, first, desperate, practical impulse was ... I've got to explain his accent," Gilroy said. "That's the place I start. I want him to have serious childhood drama. I want him to be angry. I want him to be desperate. I also want to allow him to do some very unpleasant things along the way and yet you still not reject him."

Luna now finds himself a part of a Latino "Star Wars" revolution. He recently shared the cover of Vanity Fair with "Obi-Wan Kenobi" star Ewan McGregor, "The Mandalorian's" Pedro Pascal and Rosario Dawson, who will soon star in an "Ahsoka" streaming series as the former Padawan of Anakin Skywalker/Darth Vader. Three-fourths of the cover was Latino: Luna (Mexican), Dawson (Cuban/Puerto Rican) and Pascal (Chilean). Luna also announced recently at Disney's D23 event that he would be doing the Spanish dubbing voice-over for his character on "Andor."

"Gladly, Lucasfilm and Disney found this important that our voices are there for the Spanish-speaking community," Luna said. "We're not done. I'm still working on it. Even though it is a lot of work it was important for me. Many [Latino] kids see it [in Spanish] and I don't want to have someone else's voice there."

At D23, Luna says he was taken aback during a moment backstage with many of his fellow Latino actors that included Pascal, Gael García Bernal, his former "Narcos" co-star Tenoch Huerta and his "Andor" co-star Adria Arjona.

"There was a lot of Spanish speaking going on," Luna said proudly. "It was quite interesting to see so many friends that I've worked with in other projects ... suddenly having space in these types of productions. And audiences reacting to it. When you come out in D23 and people are so pleased to see you because you sound like them, because you look like them, it means a lot."

"What it means is that there's so much talent in Mexico," Luna said, adding: "We are used to doing a lot with very little. Creativity gets triggered in a very special way when you have a lot to say and very little to do it with. Something activates ... we have this neighbor on top of us and a lot of what we consume comes from the States. Cinema. Music. Television. So it's kind of cool that we are represented in these projects. It just makes sense."