HBO's first 'Game of Thrones' spinoff recaptures the power, grandeur of the original

Paddy Considine, background, as King Viserys Targaryen, and Milly Alcock as young Rhaenyra in “House of the Dragon.” (Ollie Upton/HBO)

Let's start at the end. "Game of Thrones" was the television drama of the decade right up until its eighth and final season, when the HBO series' conclusion disappointed fans on a global scale. Despite all of the show's dexterous villains, fierce emancipators, persevering women and supernatural surprises, it handed the crown to a boy who'd literally slept through much of the show's 73-episode run.

Thanks to that fizzling 2019 climax, prequel "House of the Dragon," which premiered Sunday amid slightly lower expectations than it would have if "GoT" had nailed the landing. But with the arrival of the first episode, "The Heirs of the Dragon," the hope that a new series might recapture some of the power and grandeur of its predecessor no longer seems so fanciful.

Set 172 years before the death of the Mad King and the birth of Daenerys Targaryen, "House of the Dragon" immediately thrusts viewers into the familiar sights and sounds of the "Game of Thrones" universe: Flea Bottom and its brothels, dragons and their flames, the Red Keep and its Iron Throne. While honoring the legacy and look of the original series, the spinoff wisely adopts subtle changes in tone and approach while introducing a fresh world of characters and storylines.

Paddy Considine’s character, King Viserys Targaryen, sets up a power clash when he names his daughter, Rhaenyra, played here by Milly Alcock, as his successor in HBO’s “House of the Dragon.” (Ollie Upton/HBO)

It's the reign of King Viserys Targaryen (Paddy Considine), the seventh ruler to sit on the Iron Throne, which he inherited after decades of peace and prosperity in Westeros under his grandfather, King Jaehaerys I Targaryen. As usual, though, there is consternation about who should really be occupying that spiky seat of power. King Viserys should quash his detractors, but the middle-aged monarch is conflict avoidant, kind and reasonable — all terrible attributes for a ruler in the always barbaric and occasionally magical Seven Kingdoms. We meet the king when he has to make the worst decision of his reign: His pregnant Queen Aemma (Sian Brooke) is in distressed labor and he must choose between the life of his wife or his (hoped-for male) child.

It's here that we see the promise of the next nine episodes in the skills of showrunners Miguel Sapochnik and Ryan J. Condal, the strength of the writing and the impact of the performances. The queen's grueling delivery is contrasted against scenes of a celebratory jousting tournament taking place outside, pitting the violent act of giving life against the violent actions of men who take it away. The poignancy of these simultaneous battles is presaged by a conversation the queen has with her daughter when the girl shows concern about her mother's swollen belly: This is how we serve the realm as royal women, the queen explains. Childbirth is our battlefield. The exchange between mother and daughter, and the artful contrast of dueling knights and dutiful midwives, are powerful enough on their own to render the first episode a smashing success and show that "House of the Dragon" has a depth of understanding of its female characters that "GoT" took years to find. But it doesn't stop there: In a moment that reflects some of the ugly realities of our own world, it is men who ultimately decide the queen's fate — choosing the baby's life over hers. 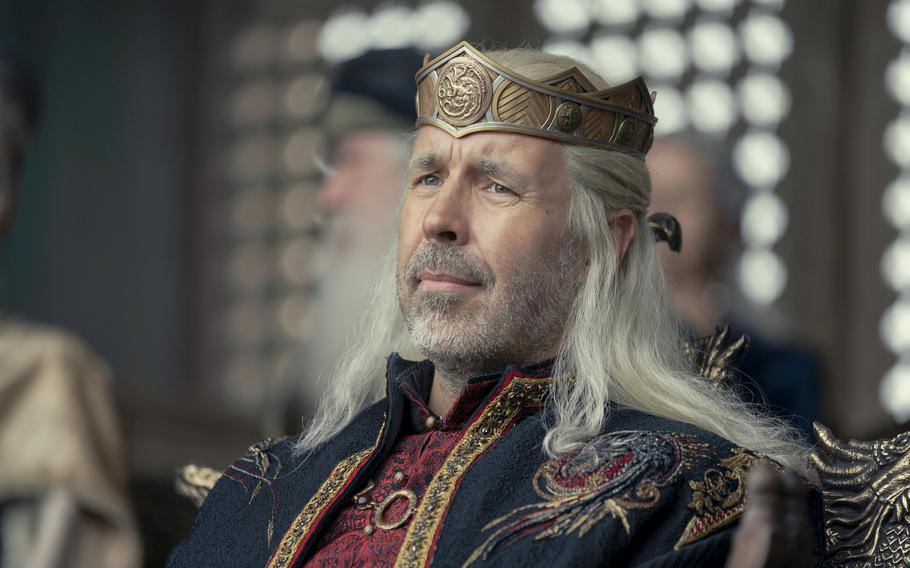 Paddy Considine as King Viserys Targaryen in “House of the Dragon.” (Ollie Upton/HBO)

This fresh chapter in the saga of the Seven Kingdoms is reverse-engineered to feed into narratives and family trees that are familiar to "GoT" devotees. It's best to brace now for the genealogy chatter around Houses Targaryen, Lannister, Velaryon and Hightower, for theories connecting the future with the past and for ghoulish discussions of which series featured more graphic displays of blood, gore and guts. A strong stomach is still required upon returning to Westeros (beware of wanton beheadings, carts full of dismembered body parts and worse), though previous fandom is not a requisite for becoming invested in "House of the Dragon."

The brewing bloodbath over the Iron Throne is an immediate draw, especially since the conflict centers on the young Princess Rhaenyra Targaryen (played wonderfully by Milly Alcock), who is just 15 and already appears to have everything it takes to rule. She's a dragon rider and possesses pure Valyrian blood, but she's not a man and history is not on her side. The king's cousin, Princess Rhaenys Targaryen (Eve Best), was denied her birthright years before. She's now known as "The Queen Who Never Was." Also vying for the throne is Rhaenyra's uncle, Prince Daemon Targaryen (Matt Smith), a violent and impetuous warrior who some call crazy. (Insanity will emerge as a given among the inbred Targaryen royalty.) It's a strong setup for all manner of familial treachery — preferably atop a dragon.

There are plenty of the flying beasts to go around in these pre-"Game of Thrones" times. We're even treated to a "Dracarys!" command by the episode's end, fueling the fire for a new, engrossing chapter in HBO's epic.