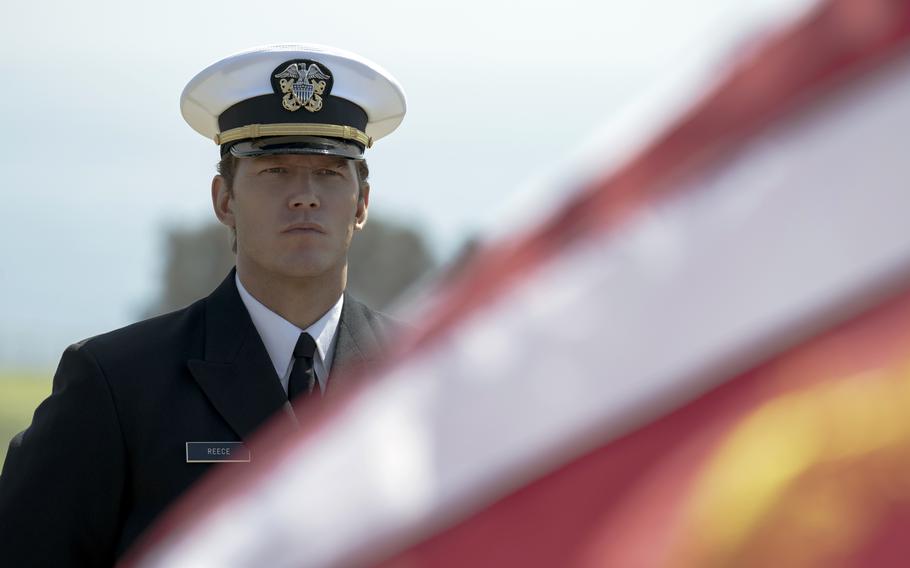 This image released by Amazon Studios shows Chris Pratt in a scene from the series “The Terminal List,” premiering July 1. (Amazon Studios/AP)

Chris Pratt portrays a Navy SEAL in his new Amazon series “ The Terminal List, ” and is surrounded on camera and behind-the-scenes by former members of the U.S. military.

In the 2013 movie “Zero Dark Thirty," Pratt played one of the Navy SEALs who helped kill Osama Bin Laden.” For that role, he shadowed Jared Shaw, a real Navy SEAL, whom he now counts as one of his “very best” friends.

“He was in my wedding,” said Pratt. The two also lived together before he moved in with now-wife Katherine Schwarzenegger Pratt.

Shaw introduced Pratt to the book “The Terminal List” by Jack Carr, a story about a Navy SEAL named James Reece, whose platoon is ambushed in a covert operation. When Reece returns home, he begins to question both his memories of what happened and the world around him.

Pratt loved the book so much that he optioned it with Antoine Fuqua directing the first episode and serving as a co-executive producer alongside Pratt and others. Shaw was added as an associate producer and also has a role in the show. The team hired real special ops members to appear in a major combat scene in the first episode that sets the series in motion. It also employed former members of the military behind-the-scenes in a variety of roles.

Pratt said he wanted “The Terminal List,” debuting July 1, to have a “layer of authenticity" that many Hollywood productions featuring special ops don't have.

By enlisting former special ops as technical advisors, Pratt said they could say, ‘Hey, guys, that’s not what that should look like. You have to do it again.’” The goal was “to try to honor that community and make this for that community, So they’d watch us and go, ‘Wow. That’s actually very accurate.”’

Beyond realism, Pratt says it makes sense to enlist former military to work on Hollywood productions. “They wake up and look for work to get done,” he said.

“I love that transition for people getting out of the service and joining the film and television industry. It’s a really great place for them. It's very similar in a chain of command. You have departments, and you have initiatives that come down from the top. We had props department people, we had wardrobe people, we had hair and makeup people, we had extras, location people, we had actors, writers, producers who were former military.”

Carr has written four other books about the Reese character, and Pratt says he's game to continue the story on screen. If that happens, he will “make sure” to continue to hire former armed service members. “They fit great,” he said.

It's also a point of pride for Pratt to help Shaw realize a personal dream of going into showbiz. He had questioned whether attempting a career in Hollywood was realistic.

"It was very serendipitous that we met. (Shaw) had been an actor in high school... I was like, ‘Hey, dude. You know, I love this sort of bubble that I live in. And I know that in part, it’s created by men and women who pick up a gun and grab their boots and their uniform, and they go to work ... You bought our freedom and I appreciate that.' I said, ’It’s time to maybe enjoy some of the spoils of his service ... Jump into the film and television industry. It’s thriving. It’s booming. And we need you.'”