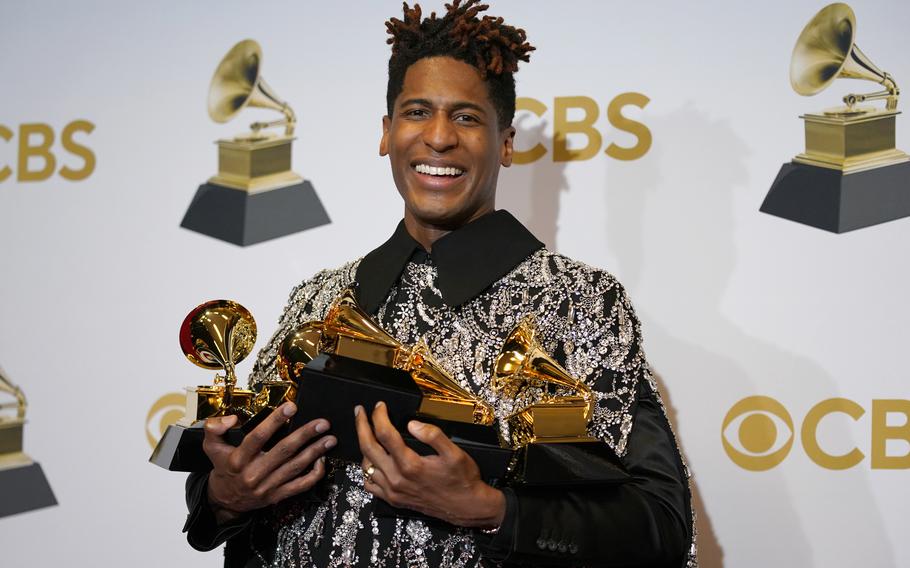 Jon Batiste, winner of the awards for best American roots performance for “Cry,” best American roots song for “Cry,” best music video for “Freedom,” best score soundtrack for visual media for “Soul” and album of the year for “We Are,” poses in the press room at the 64th Annual Grammy Awards at the MGM Grand Garden Arena on Sunday, April 3, 2022, in Las Vegas. (John Locher/AP)

Jon Batiste had the most Grammy Award nominations and his five wins outpaced everyone, yet he somehow seemed the biggest surprise on a joyous night for music that washed away some of the bad taste left by the Oscars a week earlier.

Batiste’s “We Are” won the prestigious album of the year award Sunday over music heavyweights like Tony Bennett, Billie Eilish, Taylor Swift and Ye, who changed his name from Kanye West. Batiste ended his dance-filled performance of “Freedom” during the show by jumping on Eilish’s table.

Yet Batiste captured the mood of a night where, despite some somber moments, the live performance skills of music’s best artists were on full display after COVID-19 had put much of the concert industry on pause.

“I was having such a good time,” Batiste said backstage after the show, describing the moment when Lenny Kravitz announced his best album victory. “I was hanging with my family, when my name came and the ‘We Are’ title was said by Lenny — such a full circle moment because we played together when I was 16. It was surreal.”

The versatile Batiste, music director on Stephen Colbert’s “Late Show,” also won Sunday for his song “Cry,” the video for “Freedom” and his work with Trent Reznor and Atticus Ross on the soundtrack for “Soul.”

Kravitz had performed “Are You Gonna Go My Way” in a duet with H.E.R., his guitar skills and wardrobe unchanged since the song came out in 1993.

H.E.R. was still on a high backstage when she relived the moment.

“I watched Lenny growing up,” she said. “I literally studied all his videos of his performances. He’s one of the reasons why I wanted to play guitar.”

While sometimes-awkward performance partnerships have become a Grammy Award signature, Sunday’s show featured mostly sparkling performances by artists on their own. BTS high-stepped their way through “Butter,” rapper Nas fronted a big band, Rodrigo and Eilish powerfully channeled youthful angst, Stapleton delivered a bluesy version of “Cold” and Brandi Carlile, introduced by the formidable duo of Joni Mitchell and Bonnie Raitt, lived up to the challenge.

“I think we’re all having a great time,” host Trevor Noah said.

The show was a clear contrast to the bad vibes from the Oscars a week earlier, which will forever be remembered for Will Smith smacking comedian Chris Rock after taking offense at one of his jokes.

There were a few quick references to that moment at the Grammys. Noah said that “we’ll be keeping names out people’s mouths,” a reference to Smith’s profane order to Rock not to talk about Smith’s wife. Questlove, onstage Sunday to present an award, said he trusted that people will keep their distance from him. The maker of the “Summer of Soul” film, which won a Grammy Sunday, received an Oscar last week moments after the Slap.

In a more ham-fisted exchange during the untelevised portion of the Grammys, actor LeVar Burton told the audience to “remain in your seat and keep your hands to yourself” in introducing comic Nate Bargatze, who came onstage wearing a helmet.

The Academy Awards had also decided against giving time on its show to Ukrainian President Volodymyr Zelenskyy last week, even as some actors had advocated for it. The Grammys on Sunday played a special message from the wartime leader, who soberly reminded the audience that “our musicians wear body armor instead of tuxedos.”

His taped message was followed by a John Legend performance of “Free,” with accompaniment from three Ukrainian artists — a musician, singer and poet.

The Grammys also paid tribute to Foo Fighters drummer Taylor Hawkins, who died a week ago while on tour. The band had been booked to play the Grammys. Eilish wore a shirt with Hawkins’ face as she performed her Grammy-nominated song, “Happier Than Ever.”

The Foo Fighters won Grammys for best rock performance, song and album — the latter for a record-setting fifth time in the category. The late Foo Fighters drummer Taylor Hawkins appears on the shirt of Billie Eilish as she performs “Happier Than Ever” at the 64th Annual Grammy Awards on Sunday, April 3, 2022, in Las Vegas. (Chris Pizzello/AP)

Bruno Mars made history as half of Silk Sonic with Anderson .Paak. He tied Paul Simon as the only artist to win record of the year three times. Mars won with his own “24K Magic” in 2018 and in duet with Mark Ronson on “Uptown Funk” in 2016.

The victory for “Leave the Door Open” in song and record of the year was a mild upset in a year where Rodrigo’s “Drivers License” was ubiquitous and Eilish was bidding for her third straight record of the year following “bad guy” and “Everything I Wanted.”

.Paak was giddy following Silk Sonic’s fourth award of the night, telling the Las Vegas audience that drinks were on him.

“We are really trying our hardest to remain humble at this point,” .Paak said. “But in the industry, we call that a clean sweep.”

Bennett won in the traditional pop vocal album category for a staggering 14th time, this year with duet partner Lady Gaga. Now 95 and retired from performing because of Alzheimer’s disease, he introduced a Gaga performance via taped message.

The Grammys paid tribute to behind-the-scenes concert tour employees who had been largely out of work during the pandemic, inviting four of them on to introduce performances by Eilish, Stapleton, H.E.R. and Carrie Underwood. The show also spotlighted artists in more specialized categories like gospel and bluegrass by having them perform before commercial breaks from the roof of the MGM Grand Garden Arena in Las Vegas. It was the first time the Grammys, which had been delayed due to rising COVID-19 cases, was held outside Los Angeles or New York.

Rodrigo, who starred in the “High School Musical” television series, thanked her parents for letting her follow dreams that briefly included being an Olympic gymnast. Alongside song, record and album of the year, best new artist is considered among the Grammys’ four most prestigious awards.

After some pre-show handwringing that included cancelling a planned performance by Ye due to some of his concerning online behavior. Ye wasn’t on hand to pick up either of the two Grammys he shared in on Sunday.

Mitchell won a best historical album Grammy for a project tracing her early work, while late Beatle George Harrison was honored for the 50th anniversary box of “All Things Must Pass.”