Finding humor in Ukraine war? It's (always) the Onion's way 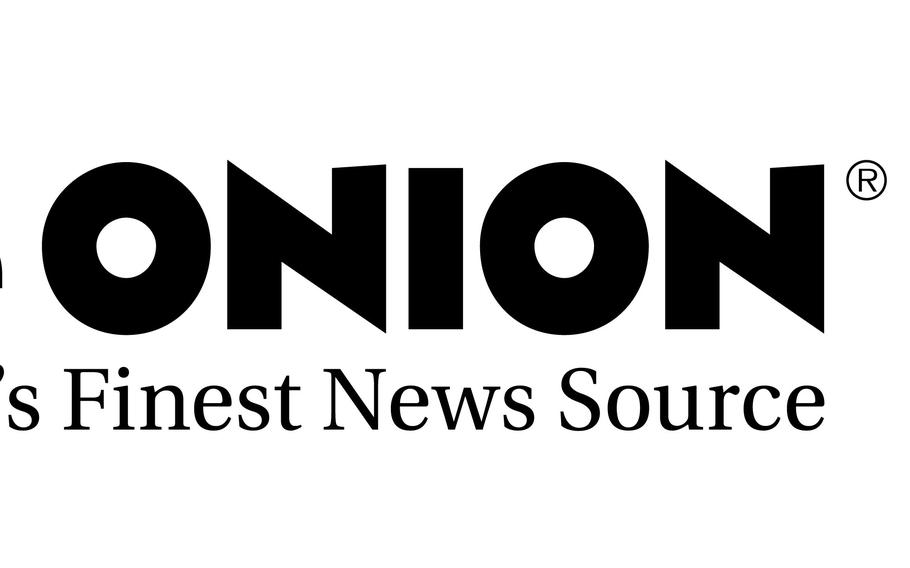 This image released by The Onion shows the logo for the comedy site. The Onion, now based in Chicago, has a staff of 20 people. (The Onion/AP)

Like all effective satire, the Onion's headline had a ring of truth: “Putin Pleased as Plot to Ruin Russian Economy, Destroy International Standing Goes Exactly to Plan.”

A month after Russia invaded Ukraine, the comedy website has been willing to Go There, to look for humor in the most searing of stories even as it unfolds. The satirical site has identified Russian President Vladimir Putin's college major as “aggression,” showed a coastal resort in Ukraine “with extremely affordable rates right now” and said the United Nations is escalating its response to the invasion from “warnings” to “stern warnings.”

Too soon? Too bad.

“Finding comedy in the Ukraine situation serves several functions,” says Chad Nackers, editor in chief of The Onion. "It is a powerful tool for exposing the folly and absurdity and human cruelty as well as providing some release from a stressful state of affairs and an endless cycle of misery.

“Laughter," he says, “can fill the hole created by a sense of hopelessness.”

The war hasn’t been ignored elsewhere in comedy. Late-night television has used Ukraine for familiar or tangential punch lines — Tucker Carlson, Donald Trump or the quality of Papa John’s pizza. Stephen Colbert suggested the United States add a T-shirt cannon to the weapons it sends to the Ukraine. After President Joe Biden called Putin a war criminal, Jimmy Kimmel suggested “stupid-head” was next.

True to the Onion's nature as a brand sprung from the Midwest (Madison, Wisc.) in 1988, there's a whiff of gentility to its Ukraine humor. None of its sarcasm touches upon the human victims of the war.

Its list of the war's potential outcomes ranged from “a lot of really bad speculative historical fiction” to “the Mets win the World Series.” A map of Ukraine identifies the “only decent taco place in the whole damn country.”

A mock slide show on Putin's rise to power shows a pregnant woman with the caption, “Putin's parents decide to try for an evil megalomaniac.” Under another picture of a gravestone, the caption reads: “Opponent for student council treasurer suffers mysterious organ failure.”

The Onion's decision not to ignore a thorny topic recalls one of its most impactful moments, when its print issue two weeks after the Sept. 11, 2001, terrorist attacks helped break a comedy barrier, says Sophia McClennen, a Penn State University professor and author of the upcoming book, “Trump Was a Joke: How Satire Made Sense of a President Who Didn't.”

That issue's cover pictured President George W. Bush under the headline, “U.S. Vows to Defeat Whoever it is We're at War With.”

Those were more influential days at the Onion, which stopped printing editions in 2013 and now exists as a website with traffic directed through social media posts. It has a great deal more competition online now and in late-night television comedy, which grew more satirical in the wake of Jon Stewart and “The Daily Show,” says Robert Thompson, director of the Bleier Center for Television and Popular Culture at Syracuse University.

There's a rich history of satirical publications like Mad magazine and National Lampoon — places where the news of the day collides with the potential for laughter that can reduce its heaviness. Spy magazine burned brightly and briefly in the 1980s. Private Eye and Punch were popular English magazines. Notoriously, the French satirical newspaper Charlie Hebdo was the target of a terrorist attack in 2015.

The Onion sometimes looks to be merely entertaining instead of satirical, says James Caron, author of “Satire as the Comic Public Sphere.”

“It's just kind of silly at times,” Caron says.

Yet it still has the capacity to hit a target squarely. In the wake of several mass shootings in the United States over the past decade, the Onion repeated essentially the same article, changing only a few details, under the headline, “'No Way to Prevent This,' Says Only Nation Where This Regularly Happens.”

“It's just this endless loop of horror,” Nackers says. The way the Onion matched the repetitiveness with its stories "really struck a nerve with people. It hit it in a way that is respectful. It feels like there's a really strong point being made, but ... it doesn't feel like you're exploiting people.”

The Onion, now based in Chicago, has a staff of 20 people. It has gone through a handful of corporate overseers. The current owner, Great Hill Partners, purchased the Onion from the communications company Univision in 2019.

Nackers started in 1997 as a photographer, earning $10 a photo. He began contributing jokes, became a writer and now runs the place. He watched the satire grow more serious after 9/11, as the world's insanity “kind of caught up with what used to be insane satirical premises.” The focus tends to toggle between dark humor and the more frivolous as dictated by the times.

“One thing that we can kind of do, because we have a lot of editorial freedom, is that we are basically a truth-teller," Nackers says. “We kind of get to the core of things and expose the real truth by using satire, making a joke, but showing things how they really are.”

“CLAIM: Rudy Giuliani is a valued Russian asset acting against Ukraine in service of the Kremlin,” the Onion wrote. “REALITY: Rudy Giuliani has not been of value to anyone for years."

Occasionally, someone will think some of the Onion's “fake news” is actually true, like when a Chinese newspaper reprinted its declaration of North Korean leader Kim Jong-un as the sexiest man of the year — adding its own slide show. When those things happen, “it's a fun day at the office,” says Jordan LaFlure, senior managing editor.

“The story of the Onion is how little we've changed,” LaFlure said. “We have a voice that endures across changing political climates. It's just a matter of deciding what is the best arrow in our quiver to fire at a particular target.”