Black Widow finally gets her own movie, one that poses the question: Who is she, really? 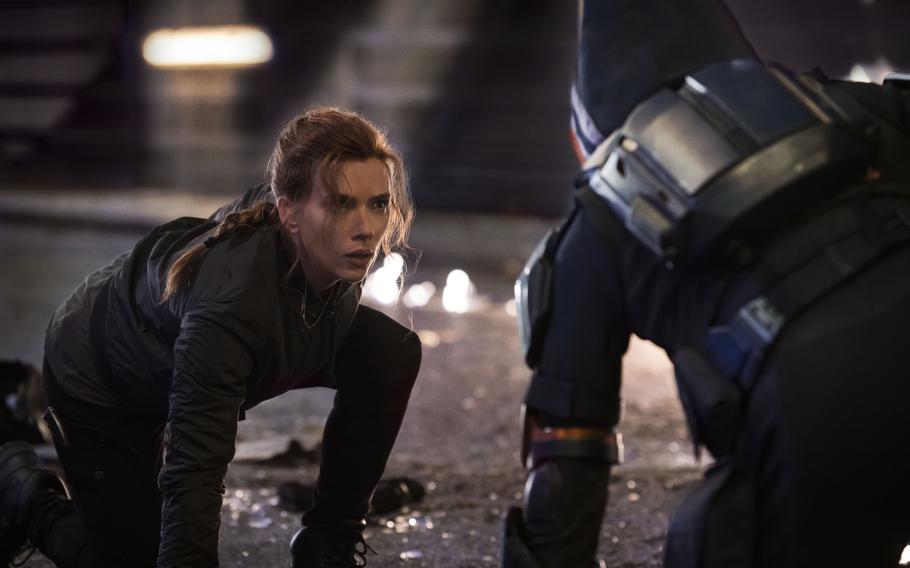 Australian auteur Cate Shortland entered the world of billion-dollar cinematic Spandex with a unique eye. She focused first not on the fighting attire. Instead, the first woman to be solo director of a Marvel Cinematic Universe movie looked at what her superstar had stitched together psychologically across a decade.

The filmmaker perceived a pattern: Ever since Black Widow’s debut as a lethal agent in 2010’s “Iron Man 2,” Scarlett Johansson had constructed another costume of sorts — a second skin of self-awareness. “We’re talking about the armor that she’s put on for the last 10 years as this kind of femme fatale,” Shortland says during a recent Zoom call. “Every time she’s moved, she’s being watched. She’s under the gaze.”

But how to pierce this armor of observation? Shortland settled on a sharp bit of conversational meta-commentary. In the new film “Black Widow,” another trained assassin, played by Florence Pugh, accuses Johansson’s world-famous warrior of being a hair-flipping, play-to-the spotlight “poser.” Shortland says the point beneath the good-natured, touch-of-envy dialogue was for someone to needle and grill Johansson’s spy by asking: “Who are you really? Who are you under that artifice? I know you.”

And that, pulsing through most every scene, is the core line of inquiry that gets answered in “Black Widow” (opening July 9), Johansson’s eighth significant outing as the title fighter also known as Natasha Romanoff - a long-awaited stand-alone film for the only woman among the MCU’s first grouping of Avengers.

Just how patient were Marvel fans for Natasha’s own film? The character had to die first — in a heartbreaking act of sacrifice in 2019’s “Avengers: Endgame” — before she got a chance to live on in her solo prequel.

Yet the timing proved exquisite for the arrival of Shortland, who embraced a vision for how a childhood-trained killer becomes a liberation leader — with the goal of turning her protagonist into a hero of greater depth. Shortland and Marvel Studios head Kevin Feige discussed the theme of standing up to bullies and how, “in a general way, we’re saying to people: Use your voice,” the director says. The filmmakers — including Johansson, who serves as an executive producer — were nodding to the zeitgeist of the #MeToo movement and wanted to tell a story about female empowerment. (The film’s theatrical release was delayed more than a year because of the coronavirus pandemic; “Black Widow” will simultaneously be available streaming on Disney Plus’s Premium Access.)

Natasha entered Marvel’s movie universe posing as an assistant to Tony Stark, Robert Downey Jr.’s wealthy industrialist turned Iron Man superhero — while working as a spy brought in by Hawkeye (Jeremy Renner) and deployed as a S.H.I.E.L.D. agent. From the moment she appears, she comes under the leering male gaze of Stark and Happy Hogan (the film’s director, Jon Favreau), which is played for laughs. And when not ogling her, Stark is Googling her: Who is this mysterious woman of powerful self-possession? (Johansson told a group of reporters during a 2019 set visit that her character in that film was “so sexualized,” according to Collider.)

Across the next decade, we discover shards of her dark past — her inhumane training for young women forced to live at the Red Room Academy, her pain over her murderous missions as a mind-controlled Widow — as the Avengers become her found family. Yet even as she bonds with such teammates as Hawkeye and Hulk (Mark Ruffalo), much of her backstory remains shrouded.

Out of that darkness, Shortland was determined to paint with narrative light — for a story set between the events of 2016’s “Captain America: Civil War” and 2018’s “Avengers: Infinity War.”

“When I first looked at the character (across) all the films, what I felt was that she was a femme fatale and she was using that,” she says. “That comes from the comics — that idea of her sexuality being dangerous, that she’s unknowable.”

“Black Widow” screenwriter Eric Pearson says that Natasha, as one of the team’s wiser characters, speaks only when she has to. “She’s unknowable because she chooses what to present,” he says. “She is also surrounded in Marvel and in this MCU by a lot of (male) characters who love to hear themselves talk. Natasha knew the power of how much you let people know you.”

For Shortland, that inscrutability became an inviting challenge. If characters have been unknowable, the first thing a director wants to do “is to peel all that back and basically work out who they are as human beings, and what it is they’re scared of,” she says. “You want to strip all of that stuff away — all the suit stuff, all the beauty, everything — and you want to just see inside them.”

From Day One, when she first walked into the Marvel offices, that was the mission Shortland championed. “She mentioned how important is was to create a fully realized character — a fully realized woman - who has evolved over the years, and really understand her on a beautiful and intimate level,” says “Black Widow” co-producer Brian Chapek. “I think that’s something that she did incredibly well.”

The last time fans saw Black Widow in action, in “Avengers: Endgame,” she was fighting her dear friend Hawkeye on planet Vormir to sacrifice her life for the Soul Stone — an essential gem in reversing villain Thanos’s mass genocide. Chapek says that scene of poignant humanity was a narrative lodestone for “Black Widow.”

“How did she get a point where she could make this decision? Did she have family? Did she have friends?” the producer says. “We’ve always alluded to this Red Room program” — the dehumanizing training she was forced into as a child — “and we knew we had to show it, but we also had to bring a contemporary light to it.”

Says Pearson: “I still get moved to tears when she sacrifices herself in ‘Endgame.’ I think that performance is a crusher.”

The Red Room represents the horrors of Natasha’s past. So “Black Widow” becomes about redemption and second chances, Chapek says, when she learns of ongoing subjugation and knows she must fight to free others.

For most of her cinematic life, Black Widow has run in the company of other heroes. To create her film’s evolving Natasha, Shortland had to isolate her fighter. “My greatest joy, actually, was starting the film where we just saw her by herself, because we can see her without any artifice,” the director says. “And then we build her up and she becomes Black Widow, the icon.

The team of Avengers became fractured during “Civil War,” with Natasha trying to hold together her superhero family. “Black Widow” provides a new lens, Chapek says, to understand how she views such support systems.

And as a capstone on Johansson’s stellar run as Black Widow, Pearson says: “This is a testament — this is our farewell and our monument to Natasha Romanoff. That’s where we’re starting from and that’s where we’ll end, and that’s great.”