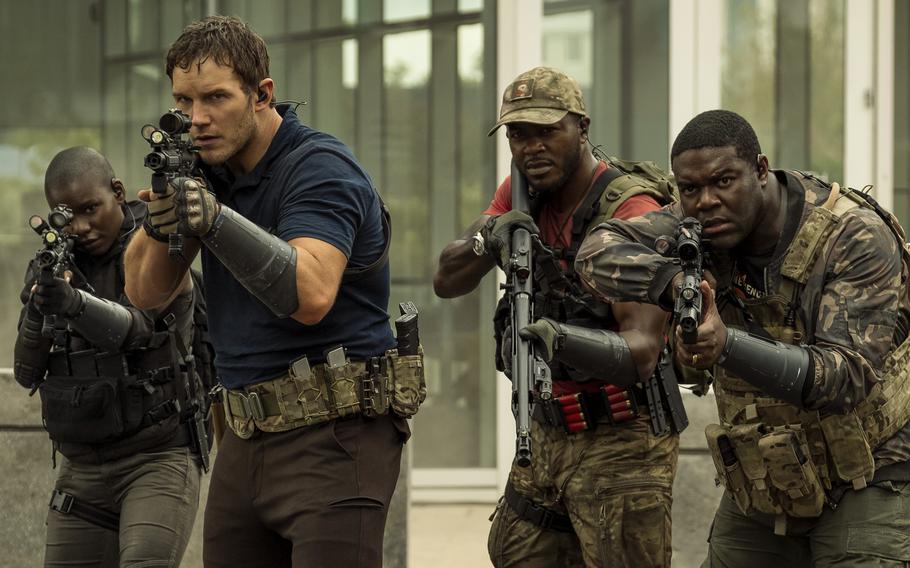 Aliens are here — well, they’re coming, in about 30 years — but it’s up to today’s soldiers to fight them in the action-packed, time-traveling, good-time popcorn thriller “The Tomorrow War.”

Dan Forester (Chris Pratt) leads a gang of soldiers who are sent into the future to win the fight against a deadly alien species that makes those noise-hating buggers from “A Quiet Place” look like family pets. These suckers — they’re called White Spikes, which sounds a little too close to White Stripes whenever they’re referenced — are screaming, menacing hellbeasts, SUV-sized and outfitted with tentacles they whip around to rip apart anything in sight. They’re not the kinds of creatures you want to be sent into the future to beam down from the sky (scientists are clearly still working out the time travel kinks) and be forced to fight.

But that’s what they’re up against. It’s a call to arms as a group of future fighters interrupt a televised soccer match (was this the best place to make the announcement? Not the Super Bowl?) in the present day to inform the human race that its time on this planet is limited thanks to the impending White Spike invasion. “We are food, and they are hungry,” it is later explained, a welcome bit of simplicity that sums up the conflict.

A draft is initiated and it’s up to everyone to do their part which, yeah, involves a little time travel, but their stints are limited to seven days due to some sort of glitch in the space-time continuum. (The particulars all explained but are still a bit cloudy, so it’s best to not ask too many questions.)

Pratt’s Forester has a wife (Betty Gilpin) and a young daughter (Ryan Kiera) at home, and a father (J.K. Simmons, all buffed up) from whom he’s estranged. In the present, Forester is a science teacher, trying to convince his students that formulas and chemical compounds matter when the kids are well aware the world is coming to an end. Science is the key to possibly saving the world, he says, even though it’s mostly firepower that he uses to take on the baddies when he eventually gets his draft notice and is teleported to 2051.

Thrown into battle alongside Forester are Charlie (Sam Richardson), Norah (Mary Lynn Rajskub), Cowan (Mike Mitchell), Dorian (Edwin Hodge) and others, many of whom plummet to their death upon their arrival from the sky. (Those scientists really need to work on that entry process.) From there it’s immediate action as the humans take on the monsters in a nonstop hail of bullets in a burned out, apocalyptic Miami, where there’s still time to make jokes about whether the Dolphins ever make it to the Super Bowl.

Director Chris McKay (“The Lego Batman Movie”) layers on the action and firepower in heavy doses, while screenwriter Zach Dean gives the story a core of humanity which grounds Pratt’s character and roots the story in family. (Hey, it worked for the “Fast” franchise.)

Richardson, even though he’s parodied movies like this on “I Think You Should Leave,” makes a nimble action hero, and is given plenty of moments of comic relief, while Simmons is a welcome presence as Forester’s hardass dad.

“The Tomorrow War” moves and feels like a throwback to the action films of the ‘90s — and “Independence Day” in particular — when sci-fi violence and jokes met with wild set pieces and combined for a rollicking good time. Hungry for action? This is food.