‘We Are Lady Parts' mixes hardcore with hijabs 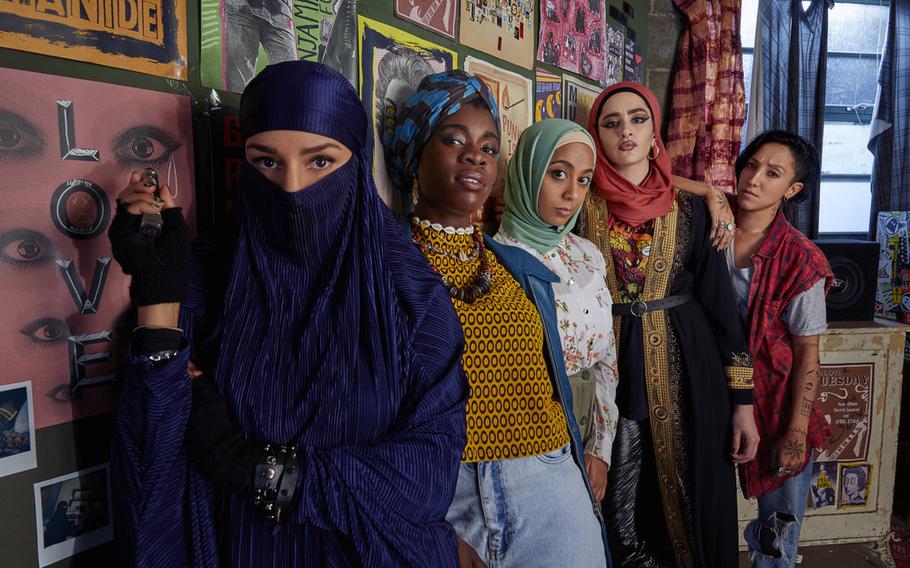 From left to right: Lucie Shorthouse as Momtaz, Faith Omole as Bisma, Anjana Vasan as Amina, Juliette Motamed as Ayesha, Sarah Kameela Impey as Saira in “We Are Lady Parts.” (Laura Radford/Peacock)

Anarchy in the U.K. takes on a whole new meaning with the arrival of “We Are Lady Parts,” Peacock’s punk rock comedy about an all-female Muslim band that bangs out songs like “Ain’t No One Gonna Honor Kill My Sister But Me” and “Voldemort Under My Headscarf.” They have the chops and attitude — now all they need is a lead guitarist, a fan or two, and a gig that’s not in the back of an uncle’s halal butcher shop.

“Almost Famous”? Not even close, and that’s what makes this hilarious, six-part British series, written, directed and produced by Nida Manzoor (“Doctor Who”), so deliciously subversive. The underdog tale, which premieres June 3, is a hilarious hybrid of pummeling punk rockisms, immigrant insider humor and 21st century feminism. It’s everything you never expected to see in a show about Muslims ... or in a series about a struggling garage band. Fans of Netflix’s “Never Have I Ever,” which returns in July, will find inspiration and deep humor in this new bunch of female misfits as they mix hardcore with hijabs. So haram yet so right.

Rock ’n’ roll tropes are fresh again when viewed through the lens of total outsiders — brown and Black Muslim girls raised on the outskirts of London. They are pitied by white liberals, resented by white nationalists and entirely absent in conversations about the next great white hope for rock. But when united by their love of music and their need to rage, they defy expectations and odds, forging their own path atop a mountain of almighty noise. 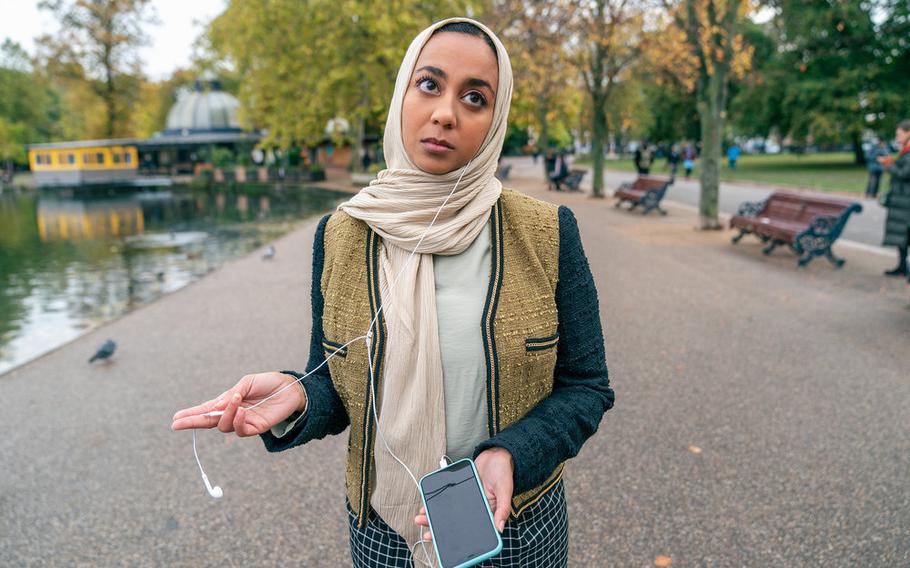 Anjana Vasan plays Amina, a nerdy student and self-taught guitarist, in “We Are Lady Parts.” (Peacock)

“We Are Lady Parts” focuses on Amina Hussein (Anjana Vasan), a nerdy, modest microbiology Ph.D. student and self-taught guitarist whose goal is finding a husband. But while teaching songs to underprivileged youth, the guitar virtuoso is discovered by the fledgling group Lady Parts. Amina is reluctantly recruited into the band despite her square tendency to wear muted pastels and puke from stage fright. How will she maintain a modest Muslim girl’s life and rip it up in a punk band? The fun is watching her try.

The girls in the band all have their own trials, none of which, refreshingly, has to do with strict Muslim parents or religious edicts. Lead singer Saira (Sarah Kameela Impey) growls like a banshee into the mike and violently chops meat during her day job as a butcher. She fears nothing, it seems, until her boyfriend proposes a long-term, committed relationship. Drummer Ayesha (Juliet Motamed) has a short fuse, which doesn’t help in her job as an Uber driver. Allah forbid the fool who pisses her off. Bassist Bisma (Faith Omole) is an earth mother fueled by furious, riot girl feminism. She authors the cartoon strip “Period (Apocalypse Vag).” And she’s raising her daughter and husband at the same time. Manager Momtaz (Lucie Shorthouse) curses like Sid Vicious and vapes like Post Malone, but from behind her niqab face cover. If only she could book Lady Parts that golden, breakthrough gig. 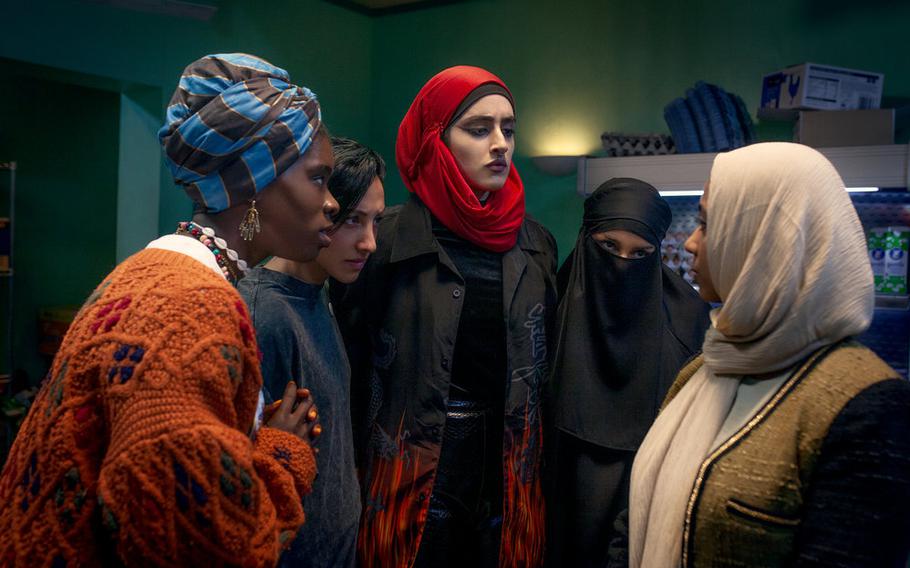 Breaking boundaries without alienating viewers is the challenge, and “We Are Lady Parts” succeeds with the volume cranked to 11. The irreverent comedy started out as a short, part of a Channel 4 initiative in Britain to introduce new talent — Michaela Coel’s “Chewing Gum,” the precursor to HBO’s “I May Destroy You,” was another show that arose out of the enterprise. The longer “Lady Parts” series has already received praise in the U.K., but is America ready for a British Muslim invasion? (Cue the Fox News chyrons.)

The Muslim characters of “We Are Lady Parts” come from a variety of backgrounds and experiences, which sounds basic but is a seismic shift given the slanted depictions of veiled women that have proliferated on television since “I Dream of Jeannie.” Hollywood’s version of the Muslim woman is a grieving victim of war, wailing in a pile of rubble while her jihadi husband casually uses their children as human shields. Bisma, Saira, Ayesha and every other character in the new British series offer an alternative point of view. For example, Amina’s mother is not forcing her to marry. Mum is a laid-back type who wants her uptight daughter to go out and experience life, to loosen up before tying the knot. 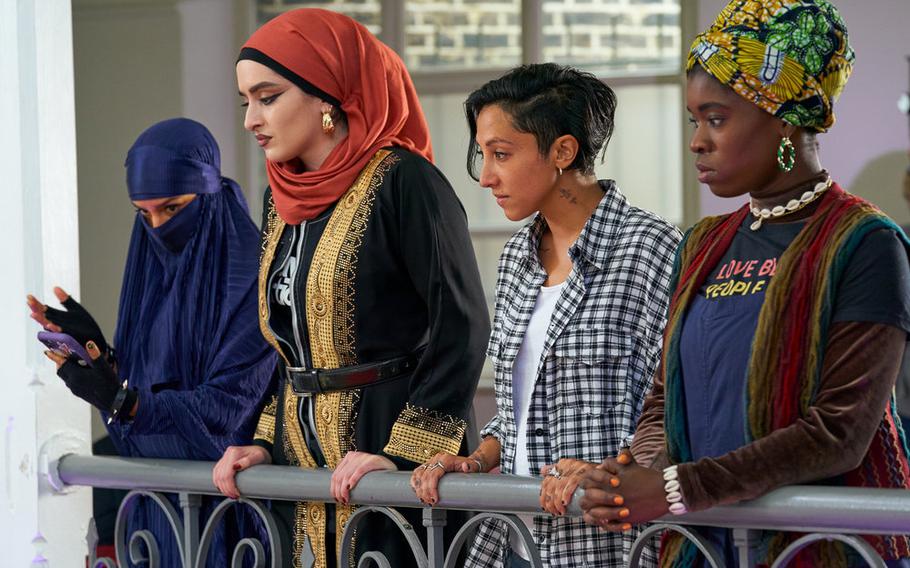 The women of Lady Parts may wail, but it’s into a mike, shouting lyrics that weaponize tabloidy notions about women and Islam: “I’m gonna kill my sister/ This ain’t about you / It’s between her and me / She stole my eyeliner / What a bitch! ... It’s an honor killing. It’s an honor killing.” Taboos be damned in this comedy created by and starring Muslim, South Asian, Black and Arab women. They’ve been the butt of smear campaigns and bigoted jokes for so long, they’ve earned the right to satirize that ignorance in their music. The Linda Lindas, LA’s all-girl Asian American and Latinx punk band, know the drill. Their song “Racist, Sexist Boy” recently went viral.

A love for music is palpable throughout “Lady Parts.” The soundtrack was written by Manzoor, her siblings Shez and Sanya Manzoor and Benjamin Fregin. They came up with gems such as “Bashir With the Good Beard,” presumably inspired by Beyoncé’s “Becky with the good hair.” When the band’s not jamming to original material, the show retains its keen pop culture sensibility when the group covers Dolly Parton’s “9 to 5” with ferocity, headbangs in the car to System of a Down and cringes at the idea of Amina worshipping an ancient god: Don McLean.