Every aspect of the visual design of "Cuphead" sells the 1930s cartoon aesthetic approach. (Studio)

Every aspect of the visual design of "Cuphead" sells the 1930s cartoon aesthetic approach. (Studio) 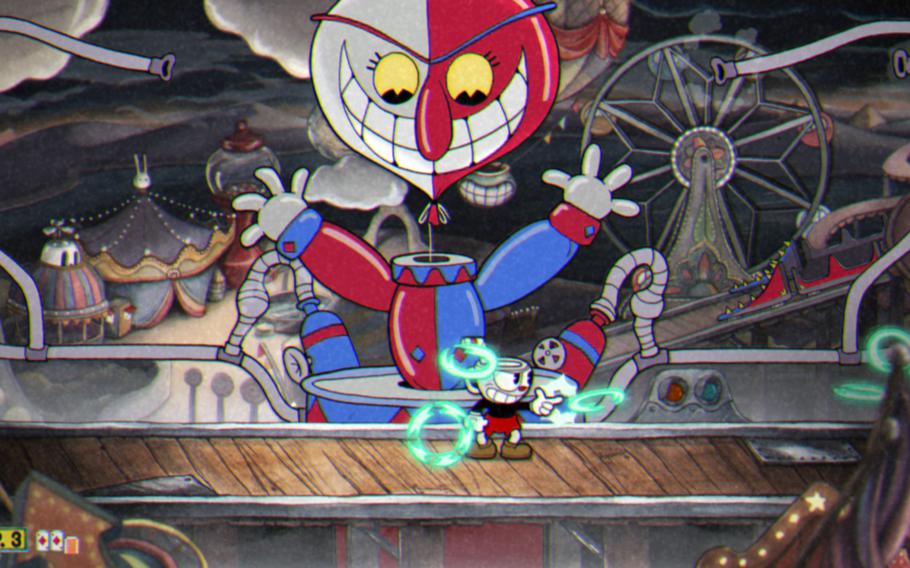 Some of the "Cuphead" boss levels send Cuphead soaring through the clouds in a biplane, replacing the platforming action with a hyperactive shooter. (Studio) 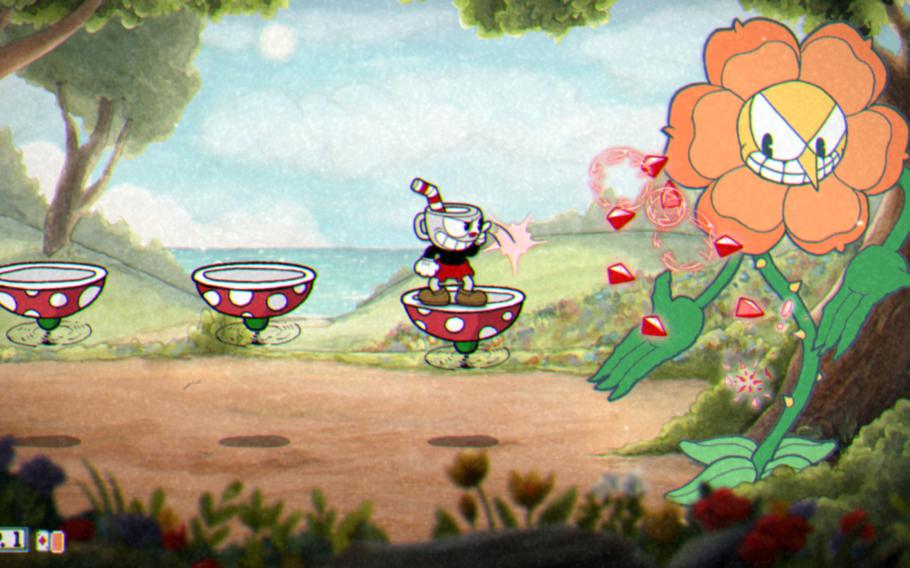 Cuphead can run, jump and fire in eight directions. Each of the levels, in theory, takes just a few minutes to beat. In practice, you’ll be replaying the same levels over and over. (Studio)

“Cuphead” is a special game that will make players want to put their controller through the wall one minute, and want to pick up the sticks and get back to it the next.

“Cuphead,” the gorgeous, brutally difficult sidescroller from indie developers Studio, initially caught the eye of the gaming public based on its charming, 1930s animation visuals. Screenshots really don’t do the visuals justice. The game oozes charm from every frame of its impossibly fluid animation.

But beneath that innocent-looking aesthetic lays the beating heart of one of the most difficult games of 2017.

The visuals are clearly the main selling point of “Cuphead.” Every aspect of the visual design -- from the idle animation of Cuphead bobbing up and down in time to the jazz-infused soundtrack to the colorful, era-appropriate character -- sells the 1930s cartoon approach. Perhaps never before has a game more accurately – or beautifully – aped a style so completely.

The game looks, sounds and feels exactly like playing a cartoon from the golden age of animation. And just like those olden times “Cuphead” seeks to emulate, the game is unforgiving, cruel and quick to lay down painful life lessons.

The game is a run-and-gun sidescroller in the vein of “Metal Slug,” “Mega Man” or “Alien Hominid,” with simple-to-grasp mechanics, short levels and intricately-designed boss encounters. All the mechanical knowledge needed to beat the game is introduced in a tutorial that should take most players around 20 seconds to complete.

It’s relatively simple stuff. Cuphead can run, jump and fire in eight directions. Hitting enemies builds up a super meter that allows you to fire off larger attacks, or, when completely full, one of three equippable supermoves.

Cuphead can also perform a parry move executed by tapping the jump button a second time when close to any pink objects in the level. This move is Cuphead’s sole defensive maneuver, and a properly executed parry will build the super meter faster. Cuphead is very fragile and can only take up to three hits (four with an upgrade) before dying and having to start the level over again.

As the titular Cuphead (or his brother Mughead, if tackling the game in multi-player), you’re tasked by a cartoonish devil with tracking down a series of bet welchers. They can be found scattered around an overworld reminiscent of the type found in “Super Mario World.”

The levels themselves don’t have to be tackled in a strictly linear fashion. There are usually two or three levels you can choose from before hitting a barrier to the next “chunk” of levels. You wander around, drink in the atmosphere then select whichever ass-kicking you’d prefer.

The levels are broken down into two major categories – boss rush and run-and-gun. The boss levels are just that – a mano-a-mano fight between you and a large, complex boss. The run-and-gun levels are more of the traditional sidescrolling action type. Some of the boss levels send Cuphead soaring through the clouds in a biplane, replacing the platforming action with a hyperactive shooter.

The boss levels are the highlight here. Each are intricate, multi-form affairs that will take a lot of patience, a bit of luck and plenty of perseverance to conquer. When a boss kills you – and you will die, often – it can be frustrating, but you’re generally learning something. A bit of a pattern, what attacks work best or angles of approach – that sort of thing.

The run-and-gun levels, however, are more filled with cheap deaths and frustration that builds as you have to replay the boring, easily conquered parts before getting to the challenging bit. Some of the deaths you’re going to encounter are from obstacles you have no way of knowing about beforehand, which means memorization of the level designs ends up being more important than skill or execution.

There is some amount of that found throughout the entire game, but it’s more pronounced in the non-boss encounters. That’s not to say boss fights are without their flaws.

Some of the bosses depend a bit too much on random chance for my tastes. One example is a fight against a dragon in which you have to leap from cloud to cloud in order to battle. The clouds are randomly generated, so there will be times where you’re forced to either take a leap of faith and hope a cloud is created where you’re landing, or absorb a hit.

Many of the bosses also have random attack patterns, some of which are easier to deal with than others. This means that sometimes you face a boss that fires off very difficult attacks in the very beginning, meaning it’s often wise to just reset after getting hit once and hope for the easier attack patterns on respawn.

The randomness doesn’t really affect the overall game, but it did add a layer of unnecessary frustration for me. I know for a fact there are other gamers happy with the little bit of RNG inherent in games like this, as it keeps levels from becoming predictable and stale. I personally dislike unavoidable hits in games where you’re limited on defensive options. Your mileage may vary here.

Each of the levels, in theory, takes just a few minutes to beat. In practice, you’ll be replaying the same levels over and over again, so progress is slower than the short encounters would suggest. Most players should get through “Cuphead” in roughly 10 hours. Thanks to the repetition born from having to replay levels, this is a perfect amount of time to spend with the game. Any longer and it would have worn out its welcome.

“Cuphead” is certainly the most beautiful game of the year, and the most difficult game I’ve played in 2017. It’s a game that I was cursing at one moment and enthralled with the next.

I wish there were more defensive options -- perhaps an expanded parry that enabled you to redirect attacks; maybe cashing in super meter for an extra HP -- but otherwise the game is mechanically and technically solid. It really is almost worth the $20 price of admission just to see it in action.

It’s a game that I told myself I’d put down after beating this one level, and suddenly hours had passed. Numerous times I put the game down at night, swearing I wasn’t going to play it again, then woke up, turned on the computer and jumped right back in. It’s going to take me a while to earn all the achievements in “Cuphead,” and I might lose a controller along the way, but it’s going to be worth it.