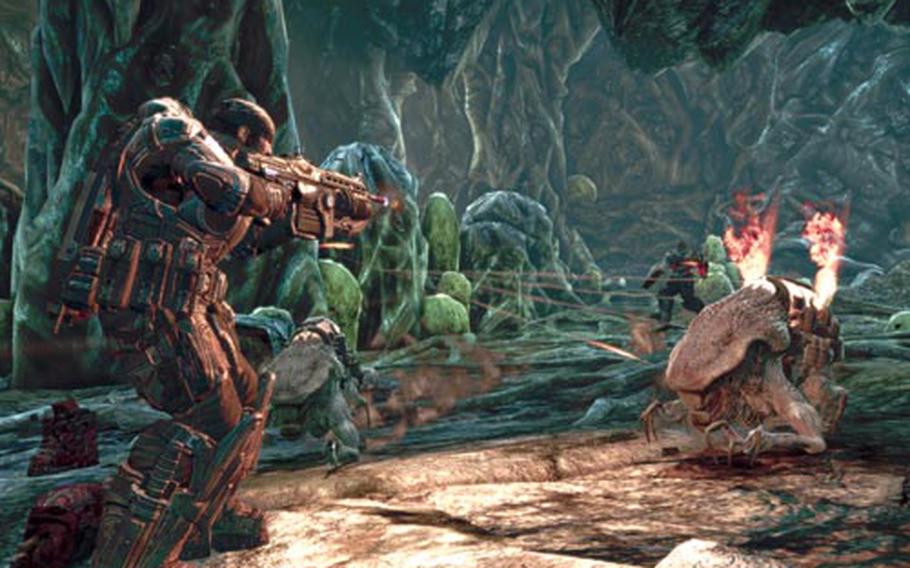 Marcus Fenix takes aim at an explosive Ticker in “Gears of War 2.” (Microsoft)

I came. I sawed. I conquered.

Thanks to "Gears of War 2," I&#8217;m ready if I ever need to wield a chainsaw against rampaging hordes of genocidal mutants.

In the M-rated shooter developed by Epic Games for Microsoft, you play as the gruff Marcus Fenix, a Gear who&#8217;s fighting the Locust Horde. You&#8217;re joined by Delta squad, a collection of interesting &#8212; though stereotypical &#8212; characters.

The campaign offers a grim story line. With the Locusts undermining entire cities, your commanders decide to take the offensive in order to preserve the last bastion of civilization. But taking the fight into the Locusts&#8217; underground lair becomes a sad and bitter job. And in the end &#8230; you&#8217;re left expecting a sequel.

The game play involves using cover and selecting the right weapon for the job.

The mix of weapons provides plenty of interesting options for dealing with the varied challenges offered by the Locust Horde. However, the most interesting "Gears" weapon is still the Lancer &#8212; an assault rifle with a chainsaw attached.

The campaign levels offered a good variety of settings and challenges. However, they&#8217;re very linear. You&#8217;ll be rewarded with extra ammo or a collectible if you explore a bit, but this is definitely not an open-world adventure.

The campaign is just the start of the action because "Gears" offers a solid variety of local and online competitive modes. One of the best is the new "Horde" mode in which you take on wave after wave of Locust soldiers.

The graphics are excellent. The character renderings and animations are very detailed and realistic. The environments are rich and full of texture. And everything is suitably gloomy.

In addition to the fun game play and interesting story, two elements help "Gears" land among my personal favorites for this season.

The first is the ability to play in split-screen co-op in the campaign as well as in other competitive modes.

The other is the ability to turn off the gore and to tone down the language a bit. This makes a very gruesome shooter &#8212; chainsaws, remember? &#8212; much easier to stomach. I wish more developers would offer that option.