After Hours: Filipiniana in Lakenheath, England Filipiniana restaurant in Lakenheath village was started by three Air Force spouses of Philippine descent. It specialized in Philippine dishes made from scratch. (Geoff Ziezulewicz/Stars and Stripes)

Filipiniana restaurant in Lakenheath village was started by three Air Force spouses of Philippine descent. It specialized in Philippine dishes made from scratch. (Geoff Ziezulewicz/Stars and Stripes) 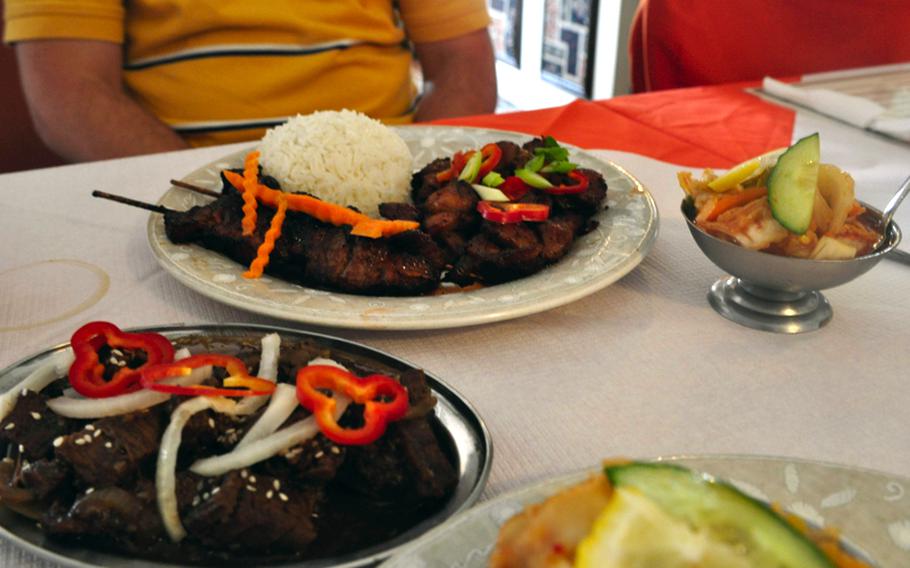 Being the only joint even remotely close to RAFs Mildenhall and Lakenheath, England, serving Philippine fare might have allowed the folks at Filipiniana restaurant to go lax with its standards. After all, where else can American airmen and their families go for a taste of this cuisine?

But being the only game in town doesn&rsquo;t hinder this cozy restaurant on Lakenheath village&rsquo;s High Street. Filipiniana provides tasty from-scratch fare in a welcoming setting.

The restaurant was started about a decade ago by three Air Force wives of Philippine descent, according to manager Martin Gregory. The women had cooked their various dishes for different base functions before gathering up the capital to start their restaurant, just 10 minutes away from RAF Lakenheath.

The rest, as they say, is savory history.

Prices are pretty reasonable at Filipiniana. One dish with rice will run you 5.95 pounds, but you&rsquo;re better off choosing two dishes for 7.75 pounds. That&rsquo;ll equal a solid plate of chow.

Like any other cuisine, Philippine food is a product of its country&rsquo;s history, and the Malay and Spanish roots are apparent in the dishes. On a recent visit, the beef bulgogi was a surprising revelation, with large, tender chunks of beef in a slightly sweet, almost earthy, and entirely tasty sauce. Teriyaki chicken, one of the more popular items on the menu, featured juicy, caramelized meat.

A side order of kimchee should satisfy all those servicemembers who miss South Korea. Made in-house, the cabbage was crisp, the sauce was spicy and the whole thing had a distinctively cool bite. While we were chowing down, an elderly woman appeared out of nowhere and asked how we liked the kimchee, proudly noting that she made it herself from scratch.

Gregory said reservations aren&rsquo;t normally needed unless it&rsquo;s Friday or Saturday night, and the restaurant offers catering for unit functions. Since the staff makes all dishes from scratch, it can easily customize cook-to-order dishes, he said.

A final note for all our tall readers: Watch yourself when exiting the restaurant. Your 6-foot-4-inch Stripes reporter was nonchalantly checking his cell phone on the way out and slammed his skull into the ridge above the door. So, please, as your commander would say, exercise situational awareness.

Directions: From RAF Lakenheath&rsquo;s back gate, head north on B1112 and continue into the village. The restaurant is on the right side. From RAF Mildenhall, take Eriswell Road as though going to Lakenheath, then follow B1112.

Clientele: About 60 percent American, with the rest Brits.