After hours: Bootshaus in Bamberg, Germany 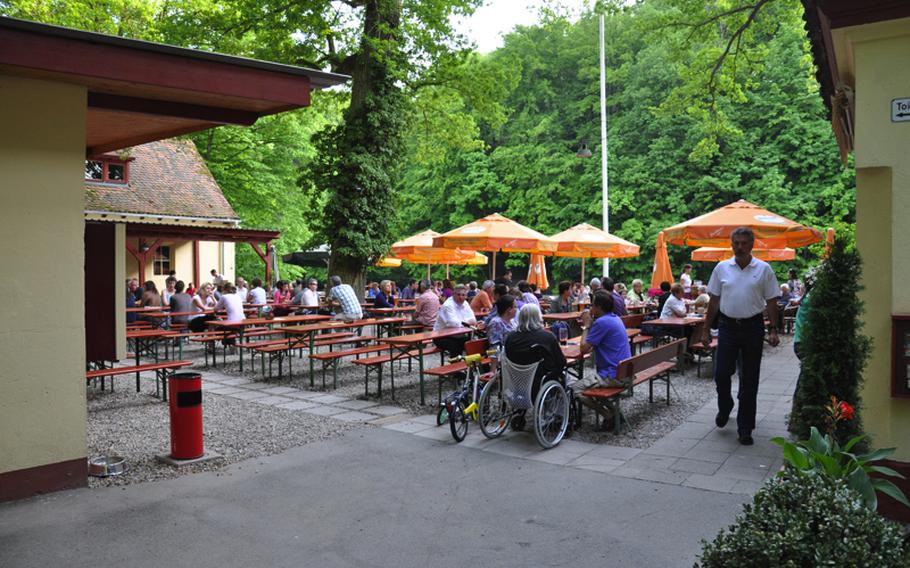 Buy Photo
The beer garden and restaurant Bootshaus in Bamberg, Germany, offers a shaded seating area along with a variety of German dishes and cold brew. (Dan Blottenberger/Stars and Stripes)

Buy Photo
The beer garden and restaurant Bootshaus in Bamberg, Germany, offers a shaded seating area along with a variety of German dishes and cold brew. (Dan Blottenberger/Stars and Stripes) Buy Photo
The monster-sized schnitzel sandwich will cost you 5.50 euros at the Bootshaus in Bamberg. (Dan Blottenberger/Stars and Stripes)

On the next sunny day in Bamberg, Germany, head to the Bootshaus, where you can relax amid riverside scenery, cold beer and hearty portions of food.

It doesn&rsquo;t make any difference how you go to the restaurant and outdoor beer garden: You can get there by boat, car, foot or bicycle, and dress is casual, so there is no need to dress up.

The Bootshaus &mdash; German for Boats House &mdash; sits right on the shore of a branch of the Regnitz River, which runs through the town, so while you sit down to enjoy a brew or a meal you will see several rowers passing by, making their way downriver.

A few of the boaters might park at the dock of the restaurant to grab something to eat before heading back out. They could be joined by cyclists, who reached the Bootsbaus after a scenic ride through the woods or along the river.

I arrived yet another way: This was my second time at the place and I walked from downtown Bamberg, making sure I remembered the route I took so I&rsquo;d be sure to find my way back. If you don&rsquo;t know exactly where it is, it can be tricky to find.

In order to get to the beer garden, you have to take a right off a main road onto a street that looks like a nature path into the woods. Follow the path for a short time through the woods and the Bootshaus and its parking lot will appear.

The day I went was a warm one, and most of the customers were drinking Radlers, a mixture of beer and some other beverage, usually fruit flavored. I choose to drink the local Keller beer the bar served, which was ice cold and helped wash down my monstrous schnitzel sandwich.

If the food and cold beverages are not enough, there is also an ice cream stand adjacent to the bar where young children were constantly swarming.

The atmosphere is welcoming and most of the waiters speak English and can help translate if you have any problems with the menu. And if you are worried about baking in the sun, don&rsquo;t be. The garden has several umbrellas to keep the customers cool, and in the areas that the umbrellas don&rsquo;t cover, the shade from the nearby trees probably will.

The garden gets crowded every day of the week, but there are plenty of picnic-style tables where customers can sit. My only complaint came from the benches at the tables, which were constantly squeaking making me think my cell phone was going off. Other than that, it was a wonderful way to spend a sunny day in Bamberg.

Directions: From the Bamberg main train station, head straight down Luitpoldstrasse and over the bridge. Follow Luitpold through the intersection at Langestrasse where Luitpold becomes Hainstrasse. Follow that straight until you come to a sign that says Hainbad. Turn right onto the street into the woods &mdash; watch out for pedestrians and bikes &mdash; and follow the small road into the woods until you come to the parking lot for the Bootshaus.

Hours: The restaurant is open 11 a.m. to 11 p.m. daily except Monday; from May through September, the outside is open the same time on &ldquo;sunny days.&rdquo;

Food and drink: It serves a variety of beers from the local brewery Kunbmuller, and a mix of typical German dishes that are moderately priced and come in large portions. The prices were reasonable, considering the size of the portions. A Radler cost 2.60 euros, and the Keller beer and an enormous schnitzel on French bread cost 8.50 euros. The cheapest item on the menu was a wurst with bread for 3.90 euros, and the most expensive a schnitzel with fries for 7.20 euros.