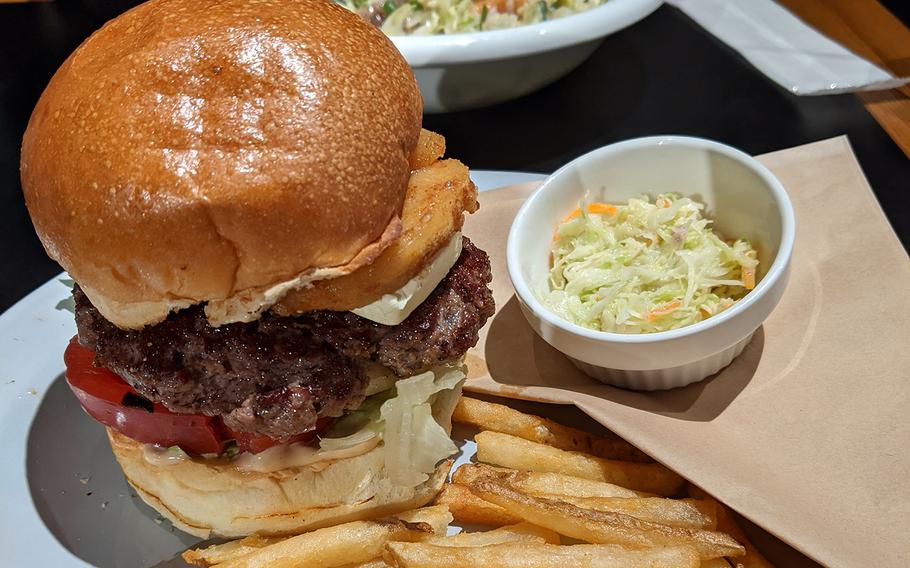 Buy Photo
The baked apple burger from Under the Cascade in Tachikawa, Japan, comes with fries, coleslaw and a cup of onion soup. (Chrissy Yates/Stars and Stripes) 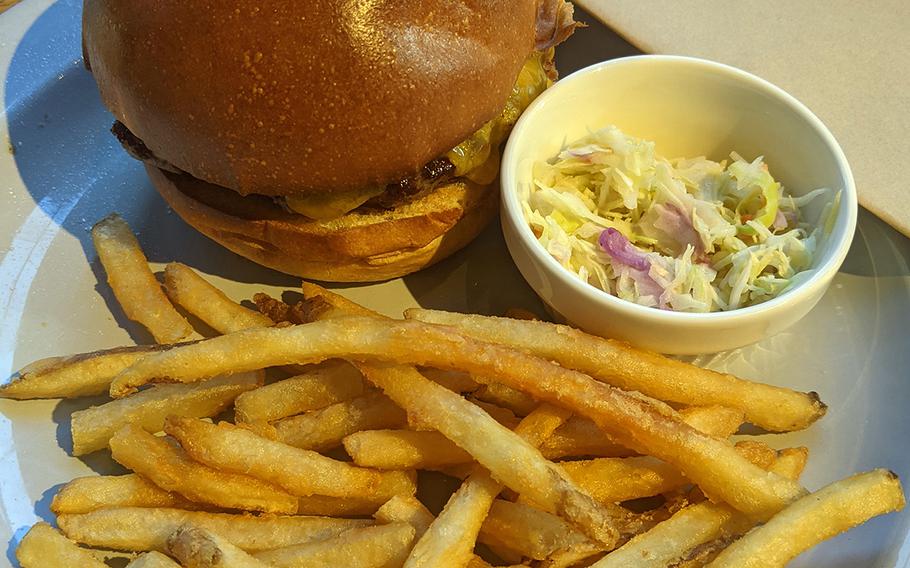 Buy Photo
The single-patty classic burger from Under the Cascade in Tachikawa, Japan, features smokey, caramelized onions and a perfect dollop of mustard. (Chrissy Yates/Stars and Stripes) Buy Photo
The creme brulee pancakes from Under the Cascade in Tachikawa, Japan, are not quite a pancake and not quite a crepe. (Chrissy Yates/Stars and Stripes)

If you’re near Yokota Air Base in western Tokyo and looking for an easy place to drive or take the train to, as well as some good burgers, look no further than Under the Cascade in nearby Tachikawa.

This American-style restaurant is in Green Springs, a retail and recreation complex that features an event hall, shops, restaurants and a hotel. There’s plenty of green space like the name suggests. It’s a great place to walk around to get some fresh air, window-shop and people-watch.

The burgers at Under the Cascade are stacked high and served with the perfect bit of pink in the middle. The menu lists salads, a poke bowl, pancakes as well as a variety of alcoholic and nonalcoholic drinks, which makes it a decent weekend brunch spot.

So far, I have tried the baked apple burger (1,280 yen, or about $12) and the classic burger (88 yen for the single patty). I prefer the latter as the smoky caramelized onions combined with the perfect dollop of mustard on top of the patty were delicious.

Each burger comes with fries that are the right mix of crunchy on the outside and chewy in the middle, a little cup of onion soup and a tiny serving of coleslaw in a little ramekin.

On my most recent trip to Cascade, I dined al fresco with a friend, and we were determined to try the pancakes. We were provided blankets as it was a chilly day and we sipped on perfectly creamy coconut lattes while we waited. However, dining outside involves bistro tables that seem a bit flimsy, especially with multiple plates and drinks stacked on top.

Sadly, my creme brulee pancakes (1,180 yen) did not live up to the enticing menu picture. They were thinner: not quite a pancake, not quite a crepe, and a bit too eggy. The brulee topping was ice cold in places and the sugar was not melted or burned all the way through. The end effect was a gritty texture instead of that fun crackle you chip at with a spoon. My friend’s tiramisu pancakes (1,180 yen), a special, limited-time item, were better, but not the brunchy knockout we were expecting.

A simple and affordable kid’s menu offers pancakes, a burger or curry for 500 yen.

While most of the menu is in English and the rest translates easily enough using a phone translation app, there is a daily special grill plate and a steak salad plate listed only in handwritten Japanese. Every time I went, the choice was between chicken or beef.

FYI for the brunch crowd: The drink menu does have orange juice and sparkling wine, so perhaps next time I’ll DIY myself a mimosa.

Directions: A 25-minute drive from Yokota Air Base or a 5-minute walk from JR Tachikawa Station

Buy Photo
The baked apple burger from Under the Cascade in Tachikawa, Japan, comes with fries, coleslaw and a cup of onion soup. (Chrissy Yates/Stars and Stripes)
Migrated
Christina Yates