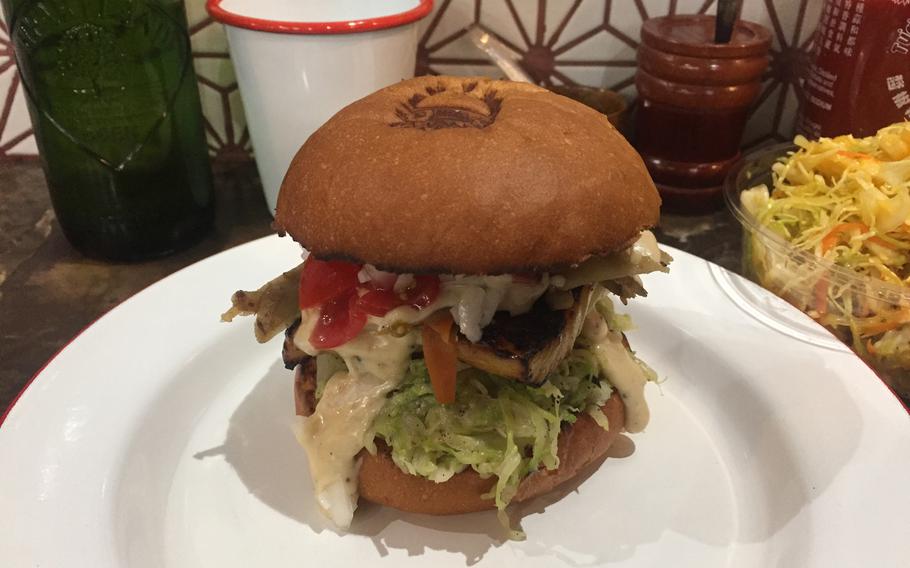 Like most restaurants in Japan, Delifucious’ menu is simple and focuses on a singular menu item — the fish burger — served in a variety of ways. (Kat Bouza/Stars and Stripes)

Japan is no stranger to marrying Western culinary favorites with local flavors, as dishes like pasta and stew served with a Japanese twist frequently appear on restaurant menus throughout the country. The practice is so common that the cooking style even has its own name: yoshoku.

One Tokyo restaurant is radically reinventing this uniquely Japanese food genre for the 21st century — and they’re doing it with fish burgers. 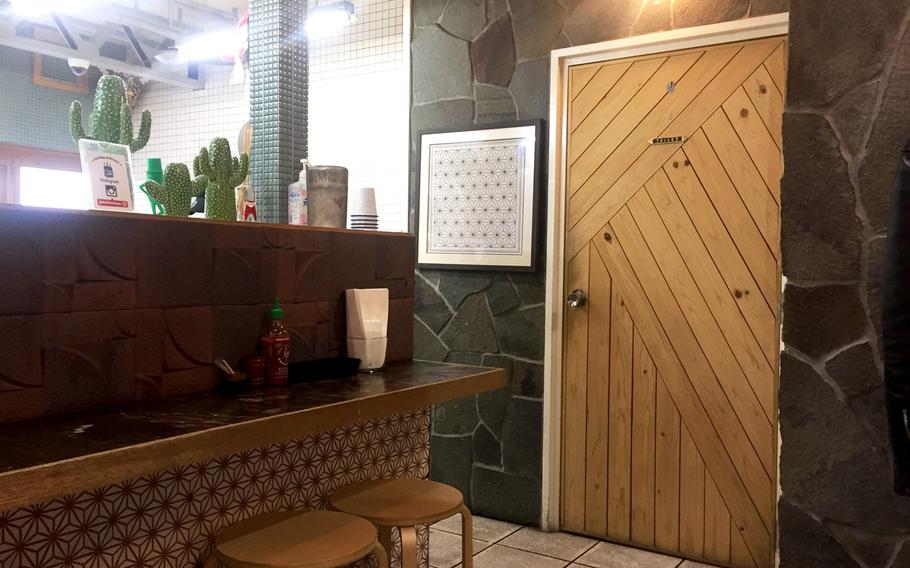 The spirit of Southern California is an obvious presence at Delifucious. Skateboards and cacti decorate the restaurant, while music by the Red Hot Chili Peppers plays on repeat. (Kat Bouza/Stars and Stripes) 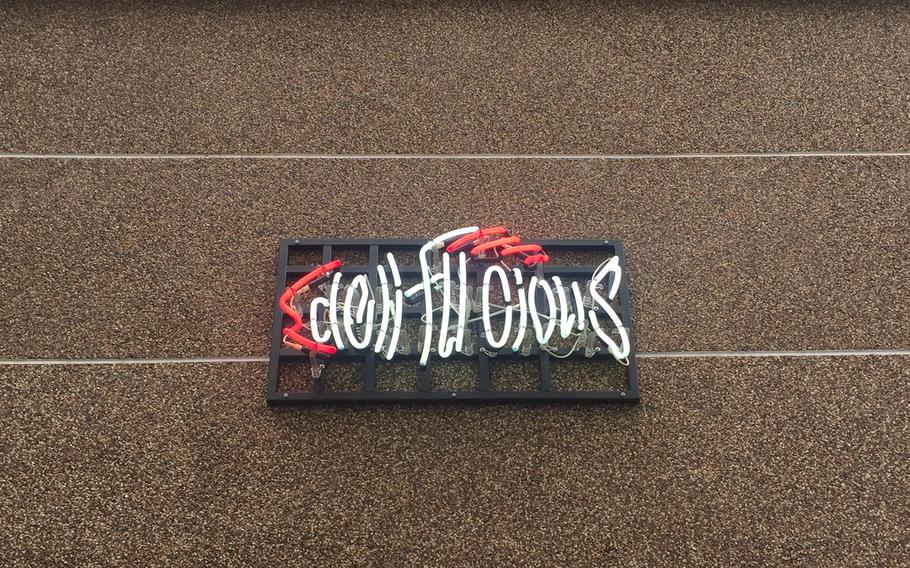 These aren’t your run-of-the-mill fast food fish sandwiches, however — so abandon all expectations of soggy, overcooked fillets of white mystery fish topped with processed cheese. Everything at Delifucious is made to order — and the fish, which is purchased daily from Tokyo’s famous Tsukiji Market, changes seasonally.

Kudo decided to switch his focus from haute cuisine to fast-casual fare after a trip to Los Angeles. There, he said, he was surprised by the city’s culinary powerhouses operating out of food trucks and small shopfronts — all producing inventive food without alienating customers by charging outrageous prices.

Inspired by this laid-back, unpretentious approach to dining, Kudo sought to replicate the spirit of L.A.’s food scene in Tokyo. As a result, the spirit of southern California is an obvious presence at Delifucious. Skateboards and cacti adorn the restaurant’s walls, while music by Californian bands like the Red Hot Chili Peppers plays on repeat.

In keeping with the restaurant’s East-meets-West attitude, the tiled interior is meant to evoke the design of post-war Japanese public bathhouses, which catered to individuals of all class backgrounds — a fitting aesthetic choice for a restaurant that prides itself on disrupting the idea that “good” food must come at a cost.

Like most restaurants in Japan, Delifucious’ menu is simple and focuses on a singular menu item — the fish burger — served in a variety of ways. Even so, the options are diverse enough that even the most discerning of palates will find something to love at this hip, yet inviting, neighborhood joint. 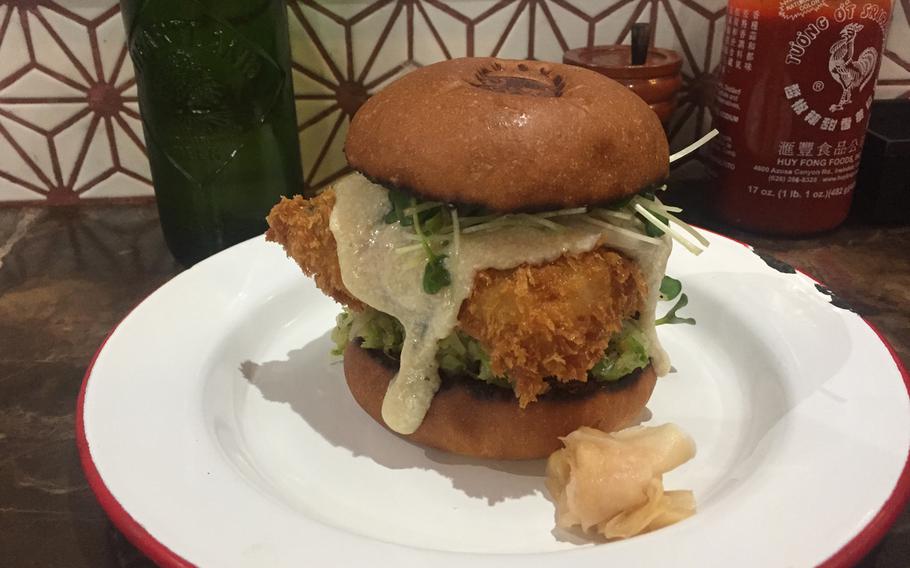 Delifucious’ signature dish is the Kobuzime Fish Burger (1,000 yen, or about $9), which features a fried fish fillet topped with a dashi-infused tofu sauce. The burger’s name is derived from Kobujime, a traditional Japanese culinary process in which fish is cured between layers of kombu, or dried kelp.

The Kobujime process infuses the perfectly fried fish fillet with rich, earthy undertones, while the delightfully gooey sauce envelops each bite with the right amount of bold umami flavor. Fresh microgreens and a lightly-dressed slaw provide a subtle bitterness and a bit of crunch.

Another standout is the Saikyo Grilled Fish Burger (1,200 yen), served with a savory cheese sauce and a medley of fresh vegetables. The Japanese name for the dish, saikyo yaki no saikyo, utilizes a bit of linguistic wordplay, as the name loosely translates to “the mightiest Kyoto-style grilled fish burger.”

Like Kobujime, saikyo is another specialized technique in which fish is cured overnight in white miso paste before being grilled — a process unique to the Kyoto region. Unlike the more salty and fermented varieties of miso, white miso is defined by its sweet and delicate taste. This subdued flavor profile helps enhance, rather than overpower, the flavor of the charcoal-grilled fish.

Less adventurous diners should opt for the more familiar flavors of the Crab and Cream Cheese Croquette Burger (1,200 yen), featuring a thick handmade crab cake with honey mustard sauce, or the Shrimp Fritter Burger (1,100 yen), topped with a generous scoop of fresh salsa. For the fish-averse, there’s always the Dashimaki Tamago Dog (1,000 yen) — a fluffy rolled omelet, commonly found on the menu at Japanese izakayas, slathered in sweet mayonnaise and stuffed into a hot dog bun.

Using classic Japanese cooking methods, Kudo and his team create sandwiches that, while simplistic in appearance, contain a complexity of flavors and textures rivaling food served at a much higher price point. It’s an ambitious move, especially in the city with the most Michelin-starred restaurants in the world — but one that pays off.

DIRECTIONS: Delifucious is accessible via the Tokyo Metro Hibiya Line and the Tokyu Toyoko Line at Naka-meguro Station (8-minute walk). Upon exiting the station, head north on Yamate Dori for roughly 600 meters. Delifucious is located on a side street on the left side of the main road.