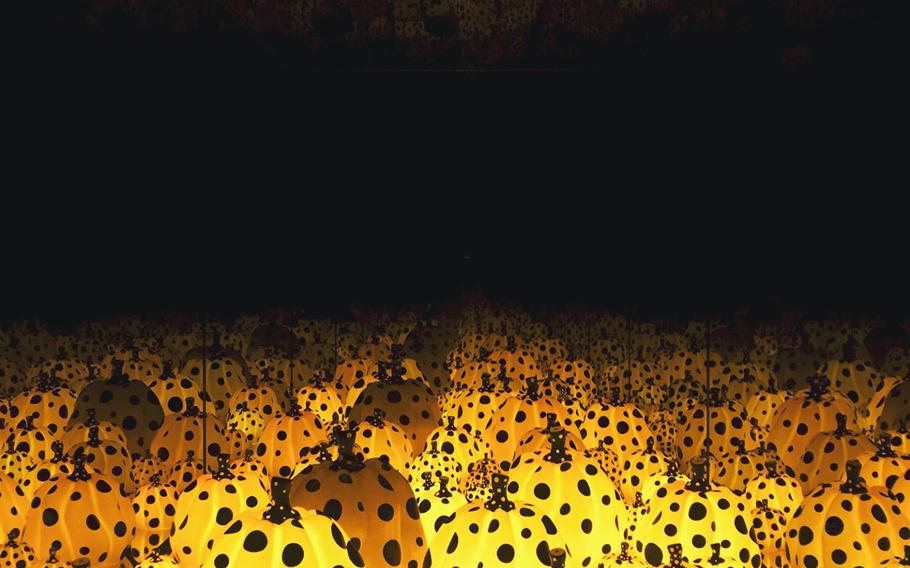 "Pumpkins Screaming About Love Beyond Infinity" at the Yayoi Kusama Museum in Tokyo. (Kat Bouza/Stars and Stripes)

Even if you haven’t heard of Japanese artist Yayoi Kusama, chances are you’ve seen her work — perhaps in a museum, but most likely on social media, where her whimsical, technicolor creations are almost always guaranteed to draw a flurry of “likes” and comments.

Born in 1929 in Matsumoto City, Kusama is regarded as one of Japan’s most innovative and mysterious modern artists — and is also, arguably, the country’s most famous female artist of all time.

A 2017 retrospective of Kusama’s work held at the National Art Center in Tokyo drew record-breaking crowds during its three-month run, while a similar exhibition currently touring North America continues to break attendance records at several institutions. Demand for entry to the Los Angeles portion of the exhibition was so great, it caused the museum’s ticketing website to crash.

Despite battling a crippling, unspecified psychiatric disorder marked by recurring hallucinations for most of her life, Kusama remains an active and somewhat imposing figure in the art world, even as she approaches her 90th birthday. Instead of retreating from the public eye, Kusama still works in her Tokyo studio for several hours a day and regularly makes public appearances (albeit in a wheelchair accompanied by an assistant) to promote her art — all while donning her signature fiery red bobbed wig. Yayoi Kusama is regarded as one of Japan's most innovative and mysterious modern artists. (Kat Bouza/Stars and Stripes)

Building off the recent renewed interest in her work, Kusama, along with the newly established foundation bearing her name, sought to create a permanent home for her vast body of work — and the Yayoi Kusama Museum opened late last year to much fanfare in Tokyo.

Situated directly across the street from the psychiatric hospital Kusama has voluntarily called home since 1977, the Yayoi Kusama Museum is itself an architectural wonder. Its stark white exterior is accentuated by organic shapes and lines standing out amid the rectangular, Brutalist beige and browns of Tokyo’s Shinjuku ward.

Because admission is limited to 200 visitors per day, visiting the museum requires the purchase of a timed-entry ticket two months in advance — and tickets generally sell out within several hours of going on sale.

The museum’s inaugural exhibition, titled “Creation is a Solitary Pursuit, Love is What Brings You Closer to Art,” compiles works created over the past 15 years, encompassing the primary artistic mediums Kusama now utilizes most frequently: Painting, large-scale sculpture and the artist’s signature Infinity Rooms. Kusama devotees will relish the inclusion of several new pieces making their public debut as part of the museum’s permanent collection.

A new exhibit — “Here, Now, I have Reached the Grandest Start of My Life” — focuses on artwork produced during Kusama’s teenage years and opens at the museum in April. It keeps with the museum’s plans to regularly feature rotating curated collections highlighting different aspects of Kusama’s nearly seven-decade-long career.

Much like the current exhibition’s title, Kusama bestows enigmatic, flowery monikers upon her works (“I Who Have Arrived in the Universe,” “Time Goes By, Death Approaches”) — meandering and poetic aphorisms that say more about the artist’s emotional state while creating the piece than they do about the actual artwork.

Coupled with the weighty titles of her work, Kusama’s paintings are physically as larger than life as their names imply — massive, imposing canvases hung almost always in a stacked array, allowing the works to completely envelop the gallery walls in a wash of color and abstract, organic forms.

The museum’s third floor, which features a permanent display of paintings from Kusama’s recent “My Eternal Soul” series, best captures this phenomenon. There, the display of 17 paintings creates a cacophony of swirling shapes and grotesque, humanoid figures — some, bright and childlike in their playful exuberance; others dark and foreboding, oozing with a palpable feeling of loneliness.

But the standout of the collection is, somewhat expectedly, “Pumpkins Screaming About Love Beyond Infinity,” the museum’s new Infinity Room. A mainstay of her oeuvre since the mid-1960s, Kusama’s Infinity Rooms are large-scale installations that utilize the optical illusion created by several carefully arranged mirrors to transform darkened rooms into vast, never-ending dreamlike landscapes. Whether the manipulated subjects are LED lights or chandeliers — or, in the case of the Kusama Museum’s piece, lighted fiberglass sculptures of Kusama’s signature psychedelic pumpkins — Infinity Rooms remain one of the most captivating sensory experiences in contemporary art. Here, unlike other museums, visitors are allowed entry into the Infinity Room alone and uninterrupted for two minutes, allowing ample time for photography buffs to get that perfect, Instagram-worthy shot. 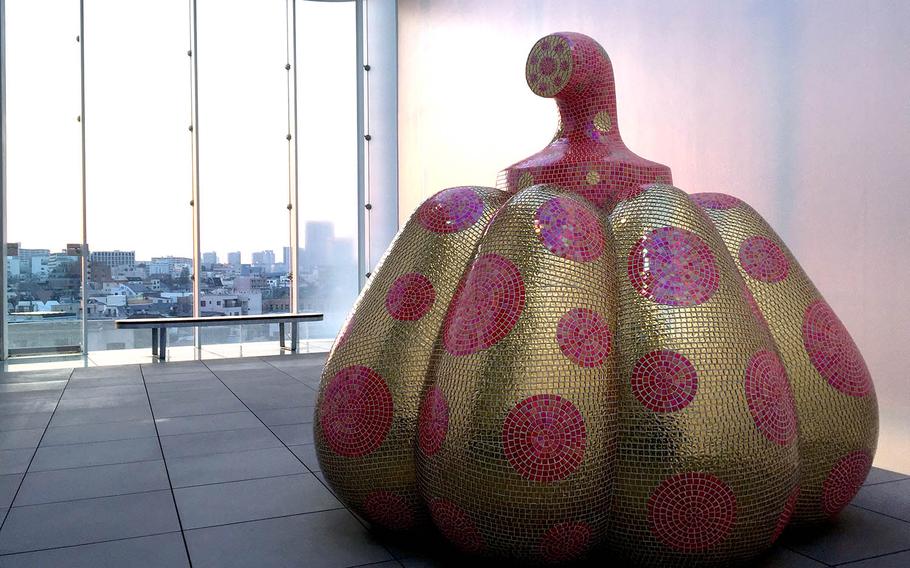 “Starry Pumpkin” at the Yayoi Kusama Museum in Tokyo. (Kat Bouza/Stars and Stripes) 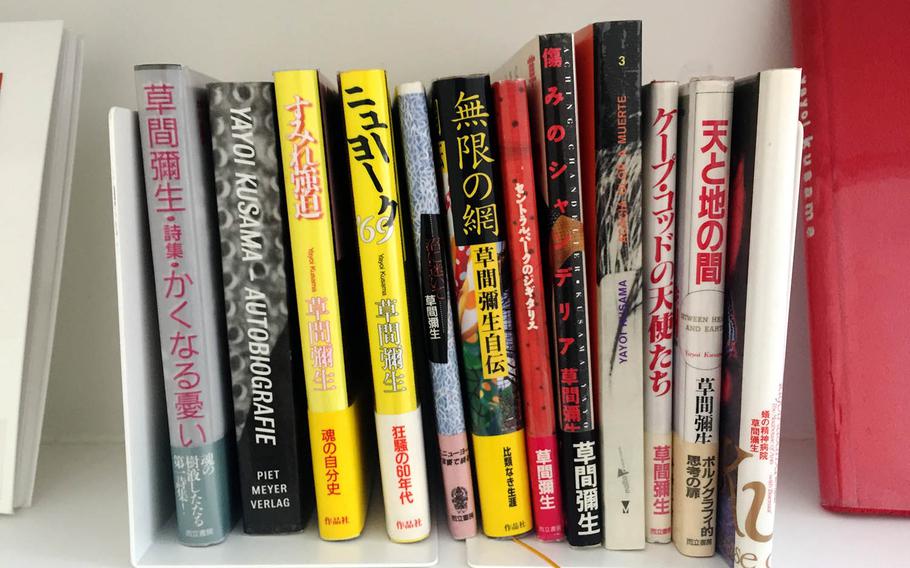 The fourth floor of the Yayoi Kusama Museum in Tokyo features a reading room with exhibition catalogs, Kusama biographies and other books on the artist's work. (Kat Bouza/Stars and Stripes)

To some, Kusama’s work can evoke a deep emotional response, the obsessive repetition of shapes that spread across her sculptures and canvases becoming a tangible expression of anxiety and dread. Others may simply take her work at face value, simply seeing her humorous abstractions as frivolous fun — but that’s OK, too.

Rife with meaning, and yet containing no meaning at all, the beauty of Kusama’s sweeping repertoire is that it exists in opposing planes, straddling the worlds of both high art and pop art — and it’s this ability to appeal to a wider audience, many of whom are unfamiliar with the tropes of the avant garde, that has allowed Kusama to sustain a relatively successful career for more than half a century.

TIMES: 11 a.m. to 5 p.m., Thursday through Sunday; also open on Japanese national holidays. The museum may be closed between exhibitions for maintenance. A calendar is available on the museum website.

COSTS: Tickets are 1,000 (about $9.20) for adults and 600 yen (about $5.50) for elementary and high school students. Timed tickets are required for entry and must be purchased two months in advance via the museum’s website. Foreign credit cards are accepted. Tickets are released at 10 a.m. on the first day of every month.