What to expect from Super Nintendo World at Universal Studios Hollywood 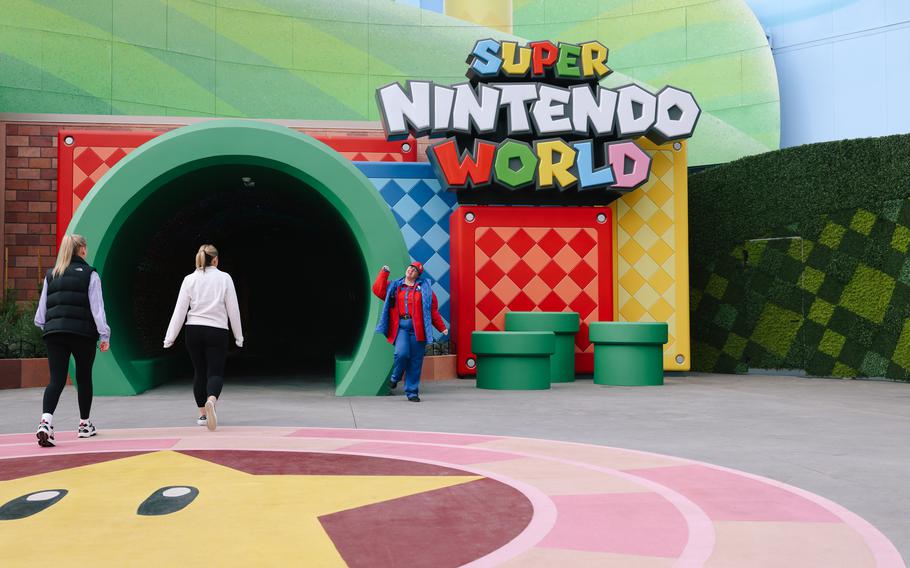 LOS ANGELES — Super Nintendo World at Universal Studios Hollywood brings a lot of firsts to the theme-park industry. It’s the first major land in North America themed entirely around a video game property and it contains the first serious implementation of augmented reality in an attraction. It’s also visually inviting, a colorful world full of movement, games, character interactions, animation and a plenty of silliness.

Expect the most interactive theme-park land ever created, one with a mission that the future of entertainment will involve a whole lot of play. The goal is to place guests inside the Mushroom Kingdom of “Super Mario Bros.” and make them feel as if they’re tourists inside a game rather than visiting a giant place filled with games. In turn, the land looks like an obstacle course, a mashup of various Nintendo landscapes — a desert to the right, blue-tinged snowcaps up ahead and a foreboding, villainous castle as its centerpiece.

The land is a win for Universal Studios Hollywood, doing for Nintendo what the Wizarding World of Harry Potter did for the fantasy franchise: build an all-encompassing world with details designed to make guests hang out longer rather than come for a ride and bolt.

Super Nintendo World won’t officially open until Feb. 17, but the land is in technical rehearsals now and will also be welcoming annual passholders before its grand opening gala next month. Be forewarned, there’s no guarantee the land will be up and running — or fully operational — until Feb. 17. Still, The Times visited Super Nintendo World on its first day of technical rehearsals and we have a few takeaways for what to expect when walking through one of the trademark warp pipes of “Super Mario Bros.” and into the land: 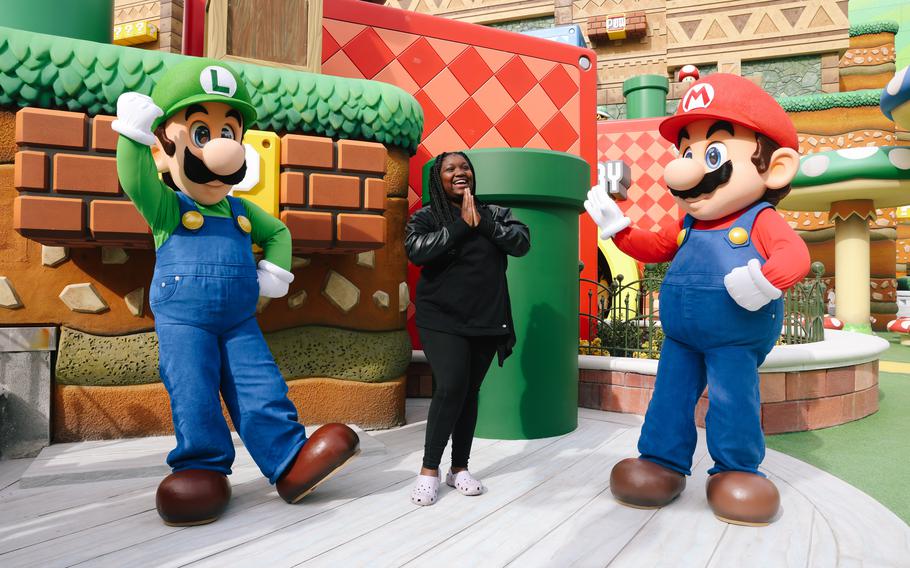 Play, as Super Nintendo World understands it, is not frivolous. Play, at its heart, is a communication tool, a way to bring together families, friends, partners and even strangers. When we enter into a game — especially a game in a real-life physical space — we step into a place with invisible boundaries and rules that serve not to gatekeep, but to allow us to act outside of our normal, everyday selves. By taking the viewpoint that we are entering a game rather than playing a game, Super Nintendo World invites us to constantly let our guard down and make blissful fools of ourselves in a room full of would-be friends.

The land has four key games and one large so-called “boss” battle, a group game that requires light body movement and asks us to imagine ourselves in “Super Mario Bros.” Some of the games are simple — spin a large wheel to try to make a Goomba, one of the mushroom-like enemies from the “Mario” games, stumble. Another is a group activity that invites us to work together to flip bricks into a singular color. Elsewhere, we punch a block and try to knock down a turtle-like Koopa. None are particularly difficult, but they all invite us to get active.

Guests who opt in for the land’s Power-Up Band — a $40 wristband that interacts with the Universal app and allows them to collect virtual coins and track their progress — will be allowed to partake in the final boss battle, a bout with Bowser Jr., one of Mario and Luigi’s key nemeses. Here, expect to get a slight workout: Our shadows were superimposed on a wall as the game tracked our full-body movement, like a next-generation Microsoft Kinect. We could jump to hit imaginary blocks, fling our arms to throw bombs and, if we were lucky, send out the occasional virtual fireball. It’s a bit wacky, lovingly messy and lasts a solid few minutes, allowing time for a large group to play along, be silly and interact with one another via a larger-than-life game. 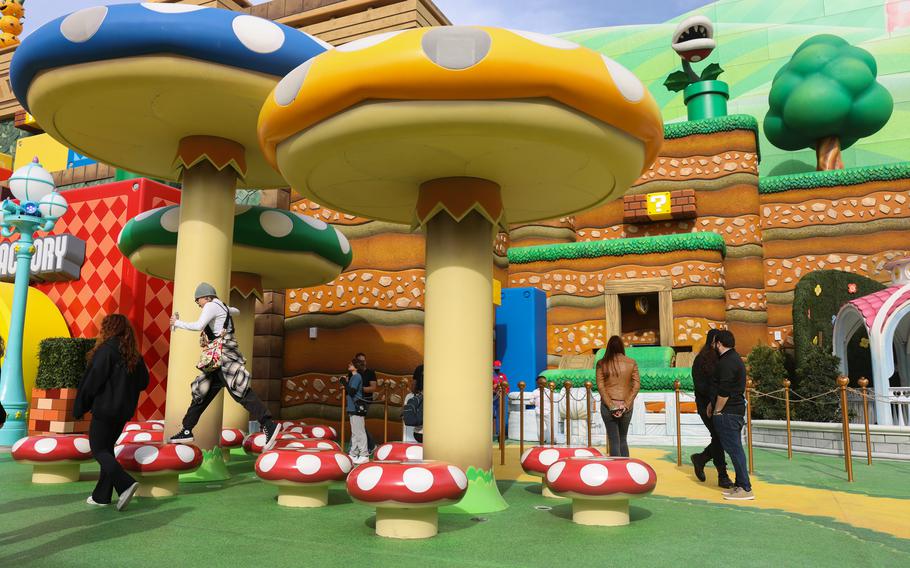 People play on top of the large mushrooms Jan. 12 during technical rehearsals for Super Nintendo World. At the park guests should feel like they’re inside a game rather than visiting a place filled with games.   (Dania Maxwell, Los Angeles Times/TNS)

The Mario Kart: Bowser’s Challenge ride is a joy

After three times on Mario Kart: Bowser’s Challenge, the land’s showcase attraction and sole ride, I’m still discovering its intricacies. First, don’t expect a thrill ride. This is a racing ride that moves at a relatively modest pace, putting the emphasis on gameplay, set pieces, animation and pure theme-park weirdness. Each ride I was on was vastly different, as sometimes the vehicle would shake or quiver when hit with a cartoonish lightning bolt, and other times Bowser, the dragon-meets-turtle villain of the Mario world, would leave us reeling. Still other times we would leave Bowser in the dust.

The attraction is part old-school theme-park dark ride — in a cavernous room following a track — and part of a showcase for modern augmented-reality technology. Before riding, we were given headbands, which we affixed to a visor that was permanently attached to our ride vehicle. Viewing the world through the visor led us into a universe of imaginative chaos. Guests, four to a kart, are placed on Team Mario. Our steering wheel had buttons that allowed us to throw shells, which we accrued throughout the ride. We aimed the shells at Bowser and his minions, but here’s the inventive twist: We aimed with our heads and threw where we were looking.

Yes, there’s a bit of a learning curve, but consider it a ride fans will want to visit multiple times to try to best their prior score. There’s quite a bit to see — at times we were underwater and shooting at electrical jellyfish, and moments later we were careening and spinning on the dazzling Rainbow Road, one of the more famous “Mario Kart” courses. We would catch glimpses of Bowser’s pirate-like airship, skeletal creatures that spring to life and try to take it all in while we were taunted by Bowser and his gang.

Video-game-inspired rides are all the rage in the theme-park space these days — see Millennium Falcon: Smugglers Run and Web Slingers: A Spider-Man Adventure at the Disneyland Resort — and Mario Kart: Bowser’s Challenge works because it understands the appeal of the “Mario Kart” games. It’s not always about winning or losing in a round of “Mario Kart,” as the draw of the game is often its anything-can-happen zaniness. This gives the illusion of living it.

The world is fully animated

One of my favorite moments in my time at Super Nintendo World was when I walked up to the land’s second story to look out of telescopes that are also outfitted with augmented-reality technology. They allowed us to view the land as a sort of living video game, as we’d see the cannon-fired Bullet Bills soar about the heads of guests. But with or without the augmented reality, I just wanted to stop and take it all in. There was movement everywhere — gold coins spun, the turtle-like Koopas strutted and a Pokey, a cactus-inspired centipede-like creature, wavered in the Southern California sun.

But more than that, there’s a bounty of original animation found throughout the land. It’s worth a visit to the Italian-leaning Toadstool Cafe — clever concoctions like Mount Beanpole cake are designed like a Mario level — to not only eat but to look out the digital windows. Here, we saw how the Toad species lives, whether that’s the orderly fashion in which they manage a kitchen or the panic when Bowser’s airship comes into view. This is all original animation created for the land, as were the opening scenes when we entered the space through the castle of Princess Peach. The latter gave us the underlying narrative of the land, which is that a golden mushroom was stolen by Bowser Jr. and we were charged with getting it back.

And while there are plenty of blocks to pound throughout the land, which garner virtual gold coins for those with Power-Up Bands, there are also hidden panels that we could tap that would come alive with video-game-inspired hieroglyphics. Some of my favorite animation was seen in the lead-up to the battle with Bowser Jr., as the drawings here captured a sketchy, vintage feel. Taken as a whole, the relatively compact Super Nintendo World, a version of which opened in 2021 in Japan, is packed with things to see, whether you want to sit back and watch or take the land’s invitation to play.