The destroyer USS Gridley transits the Gulf of Oman during a search and rescue drill, April 15, 2022. In February, Gridley assisted the British navy's HMS Montrose in the seizure of smuggled Iranian missiles thought to be headed to Yemen. (Colby A. Mothershead/U.S. Navy)

A similar incident in the same region on Jan. 28 also resulted in the confiscation of advanced weaponry.

The U.K. did not reveal the seizures until more than four months afterward because of their sensitivity, a defense ministry spokesman said Thursday, adding that it “took some time for the facts to become clear.”

Middle Eastern countries are worried about Iran's ability to launch attacks from afar, said Tom Karako, director of the Missile Defense Project at the Washington, D.C.-based Center for Strategic and International Studies.

"The capacity and the capability of Iranian missiles and drones is very robust," Karako said Wednesday. 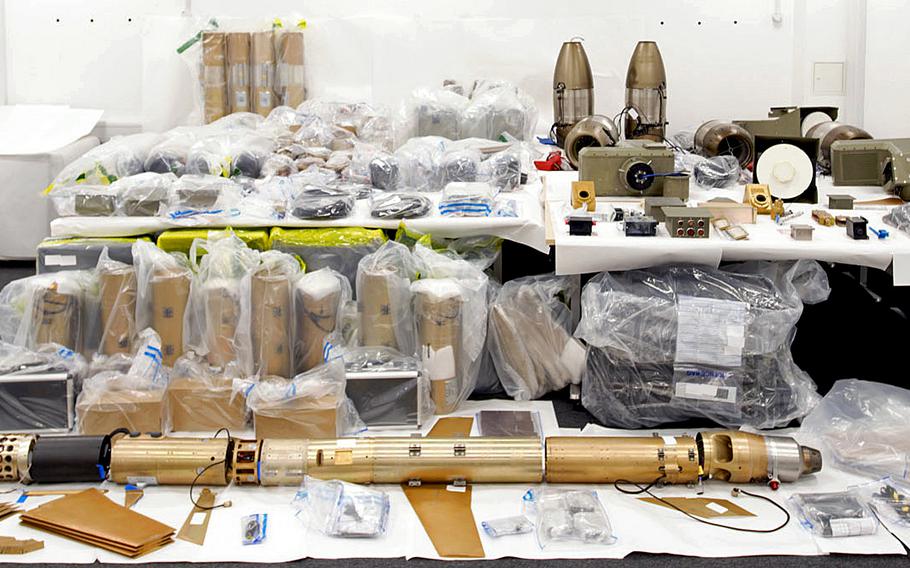 Iranian missiles and other weapons seized by the British navy ship HMS Montrose in February 2022. The U.K. announced the seizure July 7, citing a need to clarify several facts and inspect the weapons through United Nations channels before making it public. (U.K. Defense Ministry)

The transported items violate a 2015 U.N. Security Council resolution that, among other actions, imposed an arms embargo in Yemen, according to the British Defense Ministry.

The key factor in the delay in announcing the seizures hinged on that briefing, the U.K. Defense Ministry spokesman told Stars and Stripes.

A British navy spokesman added that independent verification of the seized weapons by panels of experts was vital to ensure accuracy before an announcement could be made.

Iran has been accused of providing weapons, training and financial support to the Houthis, a Shiite rebel movement that has been fighting Yemen’s Sunni-majority government for decades.

In 2014, Houthis seized control of Sana’a, Yemen’s capital. Saudi Arabia and other Middle Eastern countries launched a counteroperation in 2015.

A cease-fire agreement reached in April that was set to expire in June was extended until August, the U.N. announced June 2.

In 2016, a failed missile attack against the destroyer USS Mason was launched from Houthi-controlled territory in Yemen, Reuters reported at the time.

In March, the Houthi movement claimed responsibility for drone attacks in Saudi Arabia, including the port city of Jeddah, according to a March 26 statement from the European Union condemning the attacks.

In 2021, the U.S. Navy seized nearly 9,000 illicit weapons in the busy shipping lanes of the Middle East, the service said.

Last week, the Bahrain-based U.S. 5th Fleet announced it was offering rewards of up to $100,000 for tips leading to the seizure of weapons, drugs and other smuggled goods in the region.