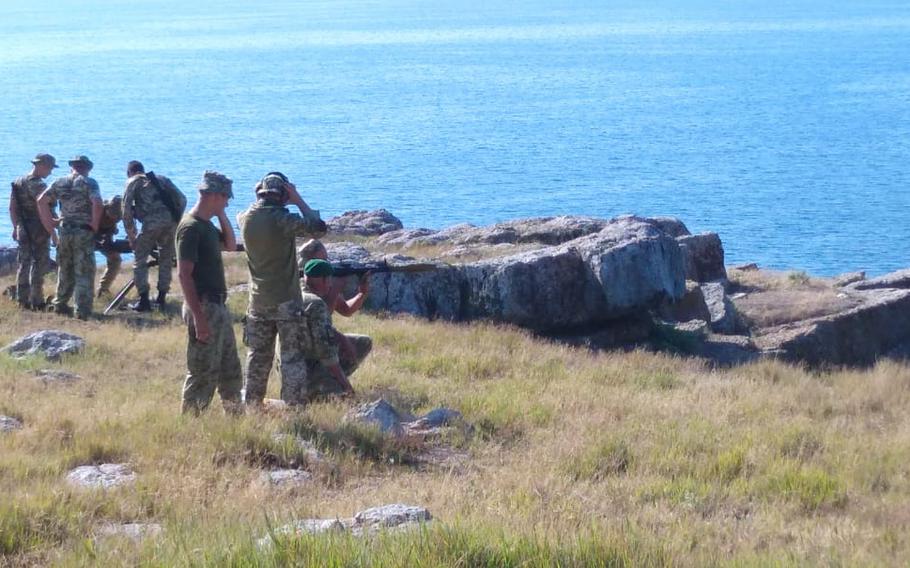 RIGA, Latvia - Russian forces say they have withdrawn from Ukraine’s Snake Island, a highly contested island in the Black Sea they captured shortly after the start of the war - presenting a small but strategic win for Ukraine on Thursday.

Russia’s Defense Ministry framed the move as a “gesture of goodwill” and an effort to create a humanitarian corridor for the export of agricultural products such as grain from Ukraine. However, officials in the nearby southern Ukrainian port city of Odessa said Russian troops had evacuated only after protracted missile and artillery strikes by Ukrainian forces.

Snake Island, also known as Zmiinyi Island, is about 25 miles off the southern coast and is a critical outpost for controlling shipping lanes for the export of Ukrainian grain and accessing the key port of Odessa.

“On June 30, as a gesture of goodwill, the Russian Armed Forces completed their assigned tasks on Snake Island and withdrew the garrison stationed there,” Russia’s Defense Ministry said in a statement.

“[We] demonstrated to the world community that the Russian Federation does not interfere with the efforts of the UN to organize a humanitarian corridor for the export of agricultural products from the territory of Ukraine.”

The Russian military has previously described withdrawals from Kyiv and other parts of Central Ukraine as “gestures of goodwill” after facing fierce resistance from Ukrainian forces and suffering major losses.

The Defense Ministry added in its statement Thursday that “now it is up to Ukraine” to clear its ports of mines and resume grain shipments.

Moscow responded by saying it would not prevent grain shipments or use the removal of mines from ports as an opportunity to renew an attack on Odessa, but Ukrainian officials have been wary of such assurances.

Covering just 0.06 square miles, Snake Island made headlines in the early days of the war when the crew of a Russian warship ordered a small team of Ukrainian border guards there to surrender or face attack. The Ukrainians responded with a profane insult, prompting the Russians to open fire.

The resisters were initially thought to have been killed but later were said to have been taken prisoner. Their defiance has been celebrated across Ukraine on stamps and posters and hailed as a rallying moment in the defense of their country.

Ukraine’s armed forces confirmed the Russian withdrawal on their Facebook page Thursday and thanked fighters in nearby Odessa for helping to reclaim the “strategically important” territory.

The Ukrainian military has recently been on a renewed mission to retake the island and launched multiple attacks against Russian forces there.

Last week, Ukraine’s southern operational command said it had used “aimed strikes with the use of various forces” on Snake Island, causing “significant losses” among Russian troops and the destruction of Russian air defense systems, radars and vehicles.

The announcement of the Russian withdrawal came just a few days after Moscow boasted that it repelled Ukraine’s attacks by destroying over a dozen drones and 21 incoming missiles. The Washington Post could not independently verify those claims.

Pro-Russian war reporters and bloggers also have linked the reinforcement of Ukraine’s fighting capabilities to the French artillery system CAESAR, stationed in Odessa, as one of the reasons for the withdrawal, signaling a win for Kyiv and its Western allies. CAESAR has a firing range of about 26 miles.

“After the transfer of French self-propelled howitzers CAESAR and [tactical missiles] Tochka-U to the Odessa region, the density of artillery fire from the Odessa region increased manifold,” a popular Telegram blogger known as Rybar wrote Thursday.

In pro-Kremlin outlets, Russia’s withdrawal from the island was described as a setback for Moscow but also as a move necessary to save the lives of Russian soldiers.

Meanwhile, NATO leaders are meeting in Madrid on Thursday for a third and final day. President Joe Biden announced at the gathering Wednesday that the United States would increase its military presence on NATO territory in Europe, citing Russia’s invasion of Ukraine. The new deployments will include a permanent headquarters for the U.S. 5th Army Corps in Poland.

Suliman reported from London. The Washington Post’s David Walker in Britain contributed to this report.