A ‘Dynamite’ guest at the White House: BTS meets with Biden on anti-Asian discrimination 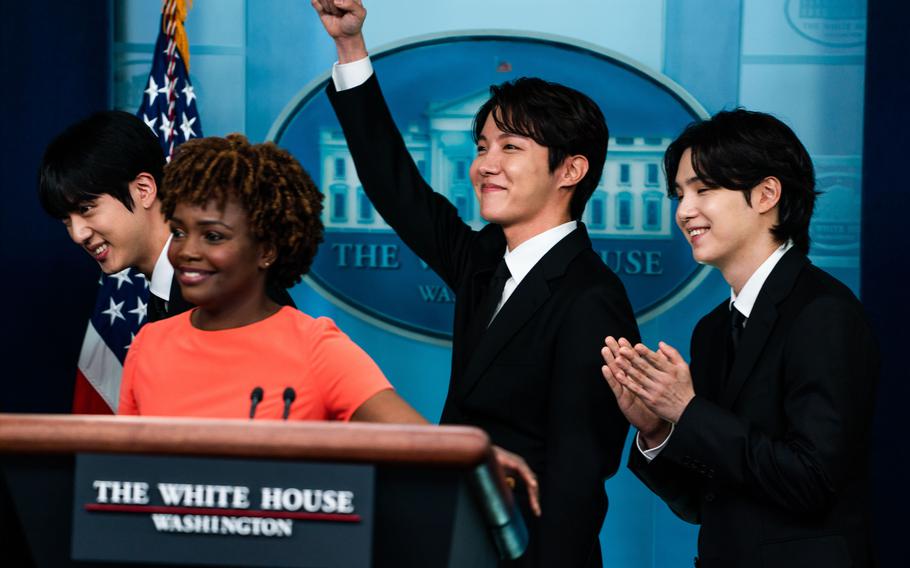 WASHINGTON — A horde of eager journalists began to crowd the aisles of the White House briefing room Tuesday long before the daily parrying session with reporters would begin - and they weren’t there for Brian Deese.

For one afternoon, the White House became an exclusive stage for global K-pop phenomenon BTS, with each of the 49 briefing room seats becoming the most coveted tickets in town. The group had been invited by the administration to raise awareness of the prevalence of anti-Asian discrimination.

“We are BTS,” said RM, whose formal name is Kim Nam-joon and is considered the megagroup’s de facto leader, as he stepped up to the briefing room lectern. “It is a great honor to be invited to the White House today to discuss the important issues of anti-Asian hate crimes, Asian inclusion and diversity.”

White House press secretary Karine Jean-Pierre, who opened up for the group, noted that while “many of you many know BTS as Grammy-nominated international icons, they also play an important role as youth ambassadors, promoting a message of respect and positivity.”

The other group members then took turns delivering their own messages in Korean. Then RM returned to the lectern.

“I think equality begins when we open up and embrace all of our differences,” he said. “Everyone has their own history. We hope today is one step forward to respecting and understanding each and every one as a valuable person.”

After their star turn in the briefing room, BTS headed to the Oval Office to meet with the president himself on the last day in May, designated as Asian American, Native Hawaiian and Pacific Islander Heritage Month. Before joining the news briefing, BTS filmed content with the White House digital team and got a tour of the grounds, according to a White House official.

The group’s visit with Biden - which, somewhat inexplicably, was closed to press coverage - was the latest example of this White House leveraging the power of celebrities to bring attention to key priorities.

But at some points Tuesday, the anti-discrimination message the administration wanted to convey was a bit overshadowed by the sheer hysteria inside the briefing room - and outside the White House gates.

Outside, hundreds of fans - mostly young girls - gathered in hopes of snagging a distanced glance at the K-pop group, and as they waited in the scorching sun, they chanted the names of the seven members and screamed, “BTS! BTS!”

Inside, scores of interested journalists, many of them of Korean descent, packed the aisles at least a half-hour before the briefing was supposed to begin - making the already cramped room even more stifling. Veteran journalists quipped that the briefing room hadn’t been that crowded since the days of Sean Spicer as press secretary, when the sessions became must-see TV for all the wrong reasons, at least for the Trump administration.

Tuesday’s live stream of the White House briefing usually attracts a few hundred interested viewers. But well ahead the start of the 2:30 p.m. session, about 11,000 had settled in for the show. Ten minutes before the briefing, about 71,000 were online. A couple minutes after the official start of the briefing - which started a few minutes behind schedule - a whopping 197,000 were watching.

More than 300,000 were still on the live stream as Deese, the White House’s director of the National Economic Council, stepped up to the lectern and began to speak. (The viewership numbers declined precipitously the longer Deese talked about inflation.)

“Okay, so I get to go home and tell my kids that BTS opened for me,” Deese said, as reporters laughed. “I did not expect that when I woke up this morning. And I know that you’re all here to talk about trimmed mean inflation, and you’re as excited about that as you are for them.”