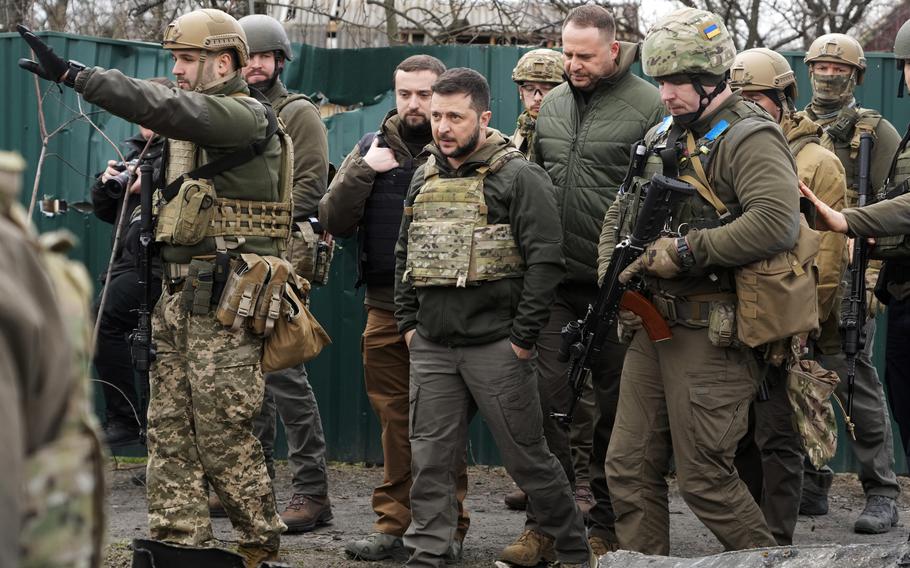 BRUSSELS - Ukraine’s top diplomat made a pointed appeal to NATO on Thursday to expedite arms supplies to Ukrainian forces - weaponry he said is urgently needed before Russia launches an expected offensive in the country’s east.

Foreign Minister Dmytro Kuleba called for swift action at a meeting of senior officials from across the Western alliance, where he put forward what he said was a threefold agenda: “weapons, weapons, weapons.”

“The more weapons we get, and the sooner they arrive in Ukraine, the more human lives will be saved,” Kuleba said ahead of the meeting. “The more cities and villages will not be destructed. And there will be no more Buchas,” he said, referring to the Kyiv suburb where the withdrawal of Russian troops revealed scenes of horrific human suffering, including the bodies of civilians who appeared to have been tortured and summarily executed.

“I call on all allies to put aside their hesitations, their reluctance to provide Ukraine with everything it needs,” Kuleba continued. “Because, as weird as it may sound, but today weapons serve the purpose of peace.”

Secretary of State Antony Blinken said Thursday that the U.S. and allies are considering sending more weapons - but did not make a specific announcement. “We’re looking day in and day out at what we believe they most need to include new systems that have not heretofore here to for been provided,” he said at a news conference in Brussels.

“We’re not going to let anything stand in the way of getting Ukrainians what they need and what we believe can be effective,” he said.

“We have agreed to help Ukraine move from their Soviet-era equipment to NATO-standard equipment on a bilateral basis,” she said, without providing specifics on what might be shipped or when.

Kuleba told reporters after the meetings that he was confident additional kinds of weaponry would eventually be provided but said he was concerned they would not be sent fast enough. He said he had given NATO ministers a specific request with a specific timeline.

“This is why it is so urgent for allies not to - how to put it mildly - not to tell us that they’re still thinking that they have to do all the procedures that there are remaining issues that have to be sorted out before they make decisions,” he said. “Either you help us now - and I’m speaking about days, not weeks - or your help will come too late. And many people will die, many civilians will lose their homes, many villages will be destroyed exactly because this help came too late.”

Kuleba’s blunt appeal in Brussels echoed the approach other Ukrainian leaders, particularly President Volodymyr Zelensky, have taken as they seek to rally the world against Russian President Vladimir Putin’s assault: direct and vocal criticism of anything less than full support for Ukraine and identifying nations that fail to meet that mark.

Earlier in the day, Kuleba named Germany as an example of nations that have held back from giving as much military support as they might provide. “While Berlin has time, Kyiv doesn’t,” he said.

“I think the deal that Ukraine is offering is fair. You give us weapons; we sacrifice our lives, and the war is contained in Ukraine,” he said. “This is it.

Ukrainian forces are running low on ammunition, he said. While allies are becoming more willing to send weapons, what has been sent so far is “not enough,” he said.

“The administration and NATO need to talk about winning, about helping Ukraine win, not just about avoiding losing, or preventing Russia from winning,” he said.

Winning, according to Hodges, would mean a return to pre-Feb. 24 lines and rendering Russia unable to resume its offensive.

“We need to see a sense of urgency,” he said. “Something like the Berlin airlift.”

Divisions among Western nations about how far to go with military aid to Ukraine are also visible in the economic arena, as some countries call for more drastic action to deprive Russia of energy income, while others balk at steps that could increase the burden felt by European consumers.

The European Union this week proposed a ban on Russian coal imports, but the bloc has yet to halt the purchases of Russian oil and natural gas that continue to provide Moscow a valuable flow of cash. Ukraine has condemned that position and has called for, on top of a slew of global sanctions already in place, all Russian banks to be cut off from the global financial system.

Blinken said Thursday that he sees a growing commitment from Europe to end its dependence on Russian energy.

“We’ve seen again and again Russia use energy as a weapon, as political leverage, and of course the proceeds it gets from the sale of its energy is now, yes, helping to fuel its aggression against Ukraine,” he said.

“But it’s not like flipping a light switch - you have to do it methodically,” he said. “You have to put in place the necessary alternatives.”

Images of mass graves and civilian corpses lying in the streets of Bucha, Ukraine, have prompted international outrage. Even before those atrocities were revealed, the Biden administration announced last month a formal assessment that Russian forces were committing war crimes in Ukraine.

“I hope we will never face a situation again when to step up the sanctions pressure, we need atrocities like Bucha to be revealed and to impress and to shock other partners to the extent that they sit down and say, ‘OK, fine‚ we will introduce new sanctions,’” Kuleba said.

In a further sign of global anger at Russia’s actions, the NATO meeting was attended by ministers from non-NATO nations Japan, Australia, South Korea, New Zealand, Georgia, Finland and Sweden. After talks on the sidelines of the NATO meeting, ministers from the Group of Seven bloc called for Russia’s suspension from the U.N. Human Rights Council. The U.N. General Assembly subsequently voted in favor of that suspension.

In remarks posted Wednesday on the State Department’s Telegram channel as part of an attempt to reach a Russian audience, Blinken said arms provided by Western nations have been instrumental in blocking Russia’s attempt to seize Kyiv.

The Biden administration has announced weapons transfers to Ukraine, including, most recently, $100 million of Javelin antitank missiles.

“What we’re focused on is making sure that we get to Ukraine the systems that they can use now and use effectively,” Blinken said. “At the same time, we’re looking at other systems - some of them larger, more sophisticated - that may be useful and important going forward, but where, for example, Ukrainians need to be trained, because some of these systems, you can’t just turn them over and have them be used immediately.”

Speaking to reporters, Kuleba said nations that cited the need for lengthy training had slowed the supply of weapons unnecessarily, because if they had signed off on such systems at the beginning of the war, they would already be in Ukrainian hands.

Asked about a video circulating that appeared to show Ukrainian troops executing a Russian service member, Kuleba said Ukrainian forces respect the laws of war and that the incident would be investigated.

He seemed to grow emotional as he described how Ukrainians are responding to abuses occurring during the war.