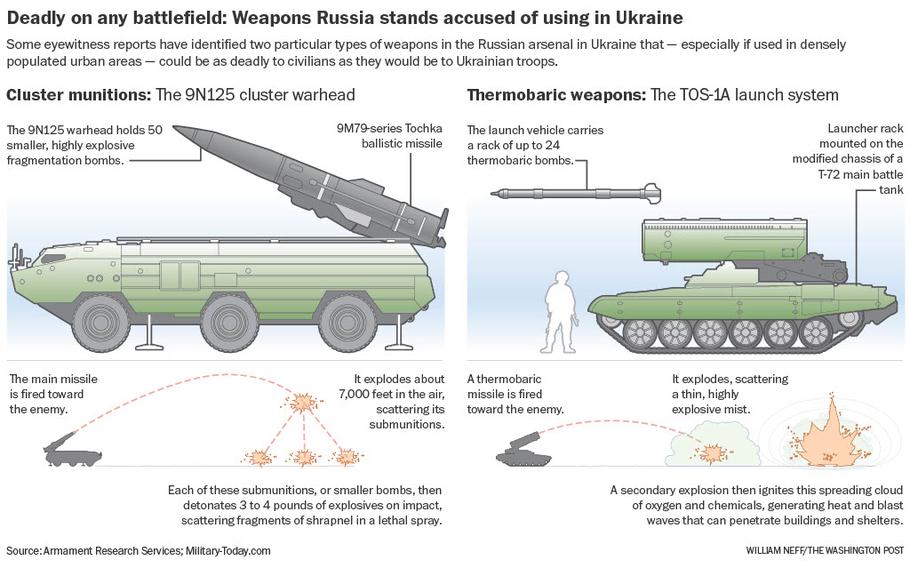 Here are some the weapons in use, or that experts fear could come to play a role in the conflict. (Washington Post)

Russian officials claimed Wednesday to have fired long-range naval cruise missiles into Ukraine. If confirmed, that would add to the roster of weapons the Russia has used in its invasion, some new or cutting edge, that have drawn the attention and concern of analysts.

Some Western experts worry that Moscow, amid pressure to escalate in the face of mounting losses, could go even further, using chemical weapons or even so-called “tactical” nuclear weapons.

But Ukraine has its own weapons, many of which its Western allies have supplied. Antitank weapons, including the Javelin missile sent by the United States, have become a symbol of Ukrainian resistance. Drones made by Turkey have not only hit Russian targets, but footage of the strikes have become a win on the social media battlefield.

Here are some the weapons in use, or that experts fear could come to play a role in the conflict.

- What missiles are being used by Russia?

On Monday, President Joe Biden confirmed Kremlin claims that they had used hypersonic missiles against Ukraine. These weapons, which can travel faster than five times the speed of sound, have not been used in conflict before.

In theory, a fast-moving, maneuverable missile such as these could be used to devastating effect, potentially even at long range. However, U.S. officials have downplayed the threat posed by Russia’s hypersonic technology. The United States and China also have advanced hypersonic programs, though neither has gone beyond tests.

Russia’s weapon is named Kinzhal - Russian for “dagger.” A modified version of Russia’s ground-launched Iskander missile, it is an air-launched ballistic missile that can be maneuvered to hit a target or dodge defenses. Russian officials say the missile was used last week to hit an ammunition depot in western Ukraine.

On Wednesday, Russia said that it had also used a long-range cruise missile called Kalibr in an attack on Ukrainian forces earlier in the week. The missile, which can be launched from sea, was first used by Russian forces in Syria. U.S. officials said Tuesday they could not confirm that the weapons had been used.

- What about cluster and thermobaric ‘vacuum’ weapons?

Russia has also been accused of using or preparing to use cluster munitions and thermobaric weapons, often called “vacuum” weapons.

Cluster weapons refer to rocket, bombs or other projectiles that scatter small bomblets. As they end up hitting a wide area indiscriminately, they can pose a large risk to civilian populations, even if they are not specifically targeted.

Rights groups have documented use of cluster munitions by Russian and Syrian force in the Syrian civil war. Early accounts from Human Rights Watch and others suggests that they have been used in Ukraine too.

Though an international treaty bans the use of cluster munitions, Russia is not a signatory to it - and neither are some other large counties, including China and the United States. Ukraine was accused of using cluster munitions against Russia backed separatists in 2014 and 2015; it has denied it used them.

Thermobaric weapons are designed to cause intense heat and pressure. Typically launched from tanks, the missiles explode in two stages, first distributing an aerosol before a second charge ignites the cloud. The ensuing explosion produces an extreme blast and burns up oxygen in the area.

They are often called “vacuum” weapons because of how they suck up oxygen, though the idea that they can suck air out of people’s lungs is mistaken. They are infamous, as they are nearly impossible to escape, as the flammable gas can seep into enclosed structures.

“Let’s say you have people hiding, maybe civilians, in a basement,” Dan Wasserbly, head of Americas news at Janes, an open-source defense intelligence agency, told The Washington Post. “That doesn’t protect them against something like this, because the aerosols get into the basement and catch fire and everybody dies a pretty awful death.”

Russia’s thermobaric launch system is called a TOS-1A launch system, though troops call it a “flamethrower” for obvious reasons. British officials have said that Russia admitted to deploying them to Ukraine, despite official Kremlin denials.

- Has Russia used chemical or biological weapons, including white phosphorus?

Russia has made allegations about U.S. biological weapons laboratories in Ukraine, which the White House has denied. But the Kremlin has its own lengthy history of developing and using similar chemical weapons itself.

Some experts point to the use of a nerve agent called Novichok to target a Russian ex-spy living in England as evidence of their willingness to use such tactics.

“Russia used chemical weapons, in peacetime, in a foreign country. The thought that they might now use chemical weapons in Ukraine is entirely rational,” Andrew C. Weber, a top nonproliferation official for the Pentagon during the Obama administration, told The Post.

Russia was also allied with Syria in that countries civil war. There, forces loyal to Syrian President Bashar al-Assad repeatedly used chlorine gas to force rebels out of their hiding spots in urban areas, despite the risk posed to civilians.

Both Russia and Syria joined the United States and 190 other countries in signing the Chemical Weapon Convention, which was drafted in 1992 and became effective in 1997. But U.S. officials have said that Russia has been in noncompliance with the convention for years and could pursue an attack using chemical weapons in Ukraine.

Ukraine has also accused white phosphorus munitions when attacking the city of Kramatorsk. A controversial substance that some military analysts consider a chemical weapon, it is often used to create smokescreens by militaries, as it creates a thick white cloud; U.S.-led coalition forces used the munitions against the Islamic State in Iraq and Syria in 2017 according to rights groups.

However, the substance can cause severe chemical burns if it touches flesh and its smoke can also poison humans and animals.

- Could Russia use nuclear weapons?

Given the high stakes that Russian President Vladimir Putin has placed on the conflict, some experts have said they are worried about the possibility, however slim, that the Ukraine war could escalate to the point that Russia uses nuclear weapons.

Of particular concern are the smaller nuclear weapons developed by Russia and other countries in recent years. These weapons are dubbed “tactical” nuclear weapons as they are designed for battle use rather than for devastating attacks like those dropped by the United States on Hiroshima and Nagasaki during World War II.

Tactical nuclear weapons are not regulated by any arms control treaty. They have never been used in a conflict before, but Russia is thoughts to have around 2,000 of them. They are small enough that they could be fitted onto a missile - perhaps even a hypersonic one like those already used by Russia in Ukraine.

Using such a weapon would allow Russia to show off its nuclear might, but could avoid the prospect of mutually assured destruction if used in a relatively cautious way.

But even this would carry with it large risks of sparking a broader nuclear conflict. U.S. senators have said that if nuclear fallout were to drift over into a NATO ally, it could well be considered an attack.

- What about the missiles and drones going to Ukraine?

Though much of the focus remains on Russia’s weapons, Ukrainian forces have also made use of technology that, if not new, is new to them - most notably antitank missiles and drones.

Shoulder mounted Javelin missile systems supplied by the United States have been used to target Russian vehicles that emit heat, including tanks, to great effect. The high tech weapons are what are known as “fire-and-forget” missiles, as they lock onto their target and do not require further guidance from the gunner.

Other countries have supplied similar weapons, including British-made NLAWs, or Next Generation Light Anti-Tank Weapons, which stand out for being less sophisticated but lighter and cheaper than U.S.-made Javelins. The United States has also supplied Stinger missiles, another type of human-portable weapon designed to take out low-flying aircraft.

For Russian vehicles, the threat comes not just from these weapons however but up above. The Bayraktar TB2, a Turkish-made unmanned aerial vehicle, has proved particularly useful. These drones use lasers to guide bombs onto unsuspecting Russians, in part because Moscow has not been able to set up air defense systems in Ukraine. Aerial footage of the destruction both filmed and caused by the drones has proven a key tool in Ukraine’s information war.

The United States has also supplied Switchblade drones to Ukrainian forces. There are two variations of these small unmanned aircrafts - one, the 300 model, weights up to five pounds and flies up to 15 minutes at a time. The 600 model, meanwhile, weights around 50 pounds and can fly for up to 40 minutes and can target armored vehicles.

These drones are known as “kamikaze” drones as they fly into their targets themselves.