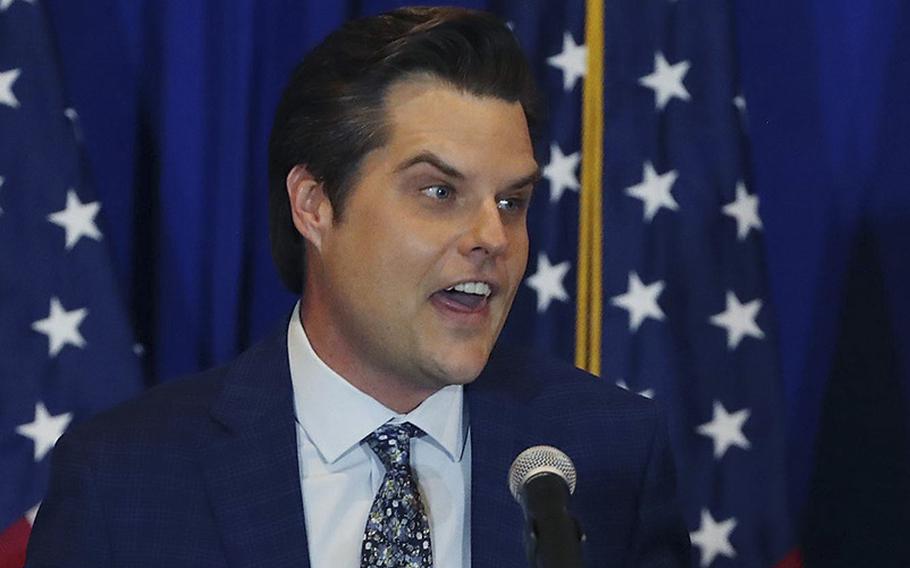 U.S. Rep Matt Gaetz, R-Fla., speaks during an event in The Villages, Florida, on May 7, 2021. In the lead up to the not guilty verdict in the Kyle Rittenhouse murder trial, Gaetz said Rittenhouse would make a pretty good congressional intern. (Stephen M. Dowell/Orlando Sentinel/TNS))

(Tribune News Service) — Rep. Matt Gaetz said he thinks Kyle Rittenhouse could make a great intern — if the teen is found not guilty in the shooting deaths of two men.

The Florida Republican said in an interview with Newsmax that he would consider hiring Rittenhouse if he beats the rap in the killing of two racial justice protesters in Kenosha, Wisconsin.

"You know what? Kyle Rittenhouse would probably make a pretty good congressional intern," Gaetz said. "We may reach out to him and see if he'd be interested in helping the country in additional ways."

Gaetz has made no secret of his support for Rittenhouse, who has become a cause celebre among Republican supporters of gun rights.

"He is not guilty. He deserves a not guilty verdict, and I sure hope he gets it," Gaetz said in the interview.

Rittenhouse claims he acted in self-defense when he opened fired on three victims, killing two of them, during street protests in Kenosha over the police shooting of an unarmed black man last summer.

Gaetz is under federal investigation in connection with allegations that he maintained a sexual relationship with a 17-year-old girl and paid for her to travel with him.

His onetime friend and political ally, Joel Greenberg, has pleaded guilty to several federal charges and is cooperating with prosecutors.

Gaetz denies wrongdoing and says he is being targeted for his conservative views and support of former President Donald Trump.