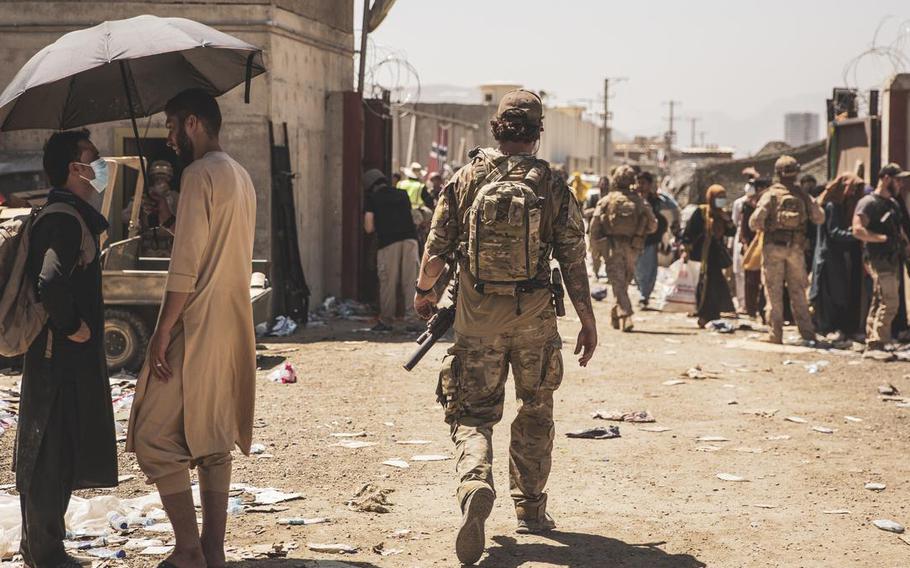 A Canadian coalition forces member walks through an evacuation control checkpoint during an evacuation at Hamid Karzai International Airport, in Kabul, on August 24, 2021. (Victor A. Mancill/U.S. Marine Corps)

CNN had become the soundtrack of her apartment, its chyrons bearing perpetual news of the evacuation in Afghanistan that Manalai had steadily come to realize might not include her family.

At first, two of her siblings - who worked for an American nonprofit organization and State Department contractor - told her they could be called to the Kabul airport at any moment to be flown out of the country. But any moment turned into any day, and now the days were running out.

She woke up on Wednesday and thought of calling her senators. She already had called the chief executive of her hospital. She even called her old English teacher: Did he know anybody? She was running out of ideas.

"As soon as [Biden] said they were going to pull out on the 31st, I knew it's over," Manalai said from her apartment in Towson, Md., CNN rolling in the background. "I so very hope somebody can help us, but even if I call a senator, I know so many people have been calling them. What will be one doctor's voice?"

The problem, she said, is the timing. "It's five days left," she said Wednesday. "Nobody can do anything in five days."

As the chaotic and deadly evacuation mission winds down in Kabul, Manalai is one of countless Afghans living in the United States who are left to come to terms with the reality that their family members are unlikely to see relief, at least not now.

They are among the thousands of Afghans hired by American-based employers but who did not work directly for the Afghanistan war effort and therefore do not hold Special Immigrant Visas. Instead, they are "Priority 2" applicants, a class created by the State Department this month for employees of U.S.-based nongovernmental organizations or other U.S.-funded programs who do not otherwise meet the criteria for SIVs.

The State Department said those Afghans would be welcome in the United States but would have to get out of Afghanistan on their own. Only once they were in a third country could they complete the application process.

But organizations helping Afghans file Priority 2 applications said that crossing the Afghanistan border was a largely impossible mission for those applicants. James Miervaldis, an Afghanistan war veteran and chairman of the Virginia-based nonprofit No One Left Behind, said the State Department did not fully think through the immense challenges that applicants would encounter.

"The program was announced three weeks ago. But it didn't have any structure to it. It was a policy with no implementation," said Miervaldis, who has been trying to help his own former interpreter's family and others flee the country under Priority 1 and 2 visas.

Jenny Marron, director of public policy and governmental affairs at InterAction, a U.S.-based coalition of international NGOs, said many NGOs initially hoped that Priority 2 referrals would be enough to help people enter the Kabul airport, at least before the terrorist attack Thursday. She said she does not doubt it may have worked for some - but not for the vast majority.

"And so now the question is, how do they get out of the country?" Marron said. "A lot of them don't have passports, don't have visas. And there is no answer."

For many, she said, "the only option is to figure out your own way out."

The State Department did not respond to questions from The Washington Post about the process or Manalai's sister's case, but an official said in a statement: "We've been working day in and day out to get as many P2 applicants to safety as we can, and we will continue to do so for as long as we can." 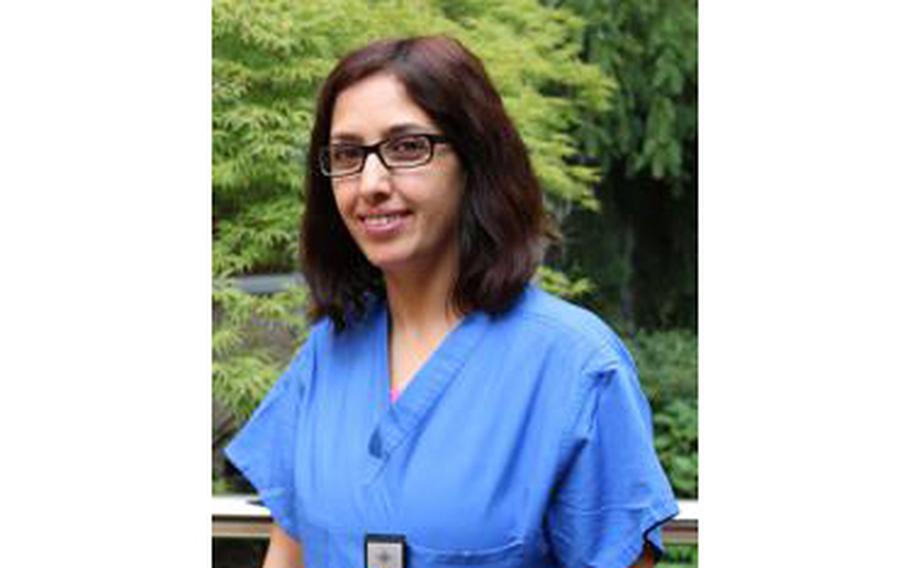 Manalai, one of 12 siblings, said her family had been through this before.

She was 16 when her family fled the mujahideen for Pakistan in 1992, traveling for 16 hours in the bed of a truck to cross the border as refugees. At a mujahideen checkpoint, she and her sister stood on the bank of a river, and considered jumping in if the mujahideen tried to take them - more fearful, she said, of forced marriage than of death.

She was 20 when she returned to Afghanistan in 1996 - three months before the Taliban took over, and she had to flee the country again.

And she was 25 when, in 2001 - just months before 9/11 - her father returned to Kabul to visit her brothers who had remained there, and three days later he was arrested by the Taliban and imprisoned for three months. A religious scholar and former family law judge, her father was accused of preaching Christianity, because he possessed a Bible, she said.

"I'm kind of used to this whole craziness, ever since I'm born," she said. "We were born in war. We grew up in war. We ran into basements for the majority of our lives."

Now, she said, while she missed her father deeply sincehis death last year, she was happy he was not alive to witness the Taliban's return to power.

She came to the United States on a student visa in 2009 to further her education as a doctor.Three brothers came, too: one on a student visa and later asylum after the Taliban threatened his family in Afghanistan; one for his master's degree; and another on a Special Immigrant Visa in 2015, having worked as an engineer for a company contracted with the U.S. military.

But most of her other siblings couldn't bring themselves to leave Afghanistan - including those who ultimately found work with the Americans, the two for whom she was most worried. She said her sister worked as an auditor for a contractor with the State Department's Bureau of International Narcotics and Law Enforcement Affairs, in addition to running her own private gynaecology clinic in the evening. Her brother, an epidemiologist and physician, had worked for years until recently with a Maryland-based nonprofit specializing in women's health.

"He did not want to get out of the country all these years," Manalai said of her brother. "He was like, 'If we do not rebuild the country, who will?' "

The Post is not disclosing Manalai's siblings names at her request and is not naming her brother's employer at the employer's request. The employer cited a risk to the safety of Manalai's brother and other employees while the organization is still working to get them out of the country. A spokeswoman for Maryland Republican Gov. Larry Hogan said that the Maryland Office for Refugees and Asylees is "providing whatever assistance and resources we can" for the nonprofit.

While Manalai said she appreciated all the efforts, by Wednesday afternoon, hope had fizzled, she said.

In the days after the fall of Kabul, her sister had been so certain that she and her family would be evacuated that she had started giving away her belongings. Now, the assurances from her employer turned to doubts, and in an email just before 1 p.m., her sister told her that after being "so sure we will be evacuated ... at the end they said they can't do anything."

Just two hours later came another email from her brother, this one more succinct. "It's over," he wrote.

On Thursday came the terrorist attack, killing 13 U.S. service members and scores of Afghans. The images Manalai watched on CNN would later haunt her as she tried and failed to sleep.

She decided to call her senators' offices that day. And on Friday, she filled out a form provided to her by her congressman, Rep. John Sarbanes, D-Md., even as she told herself that now there were just three days left.