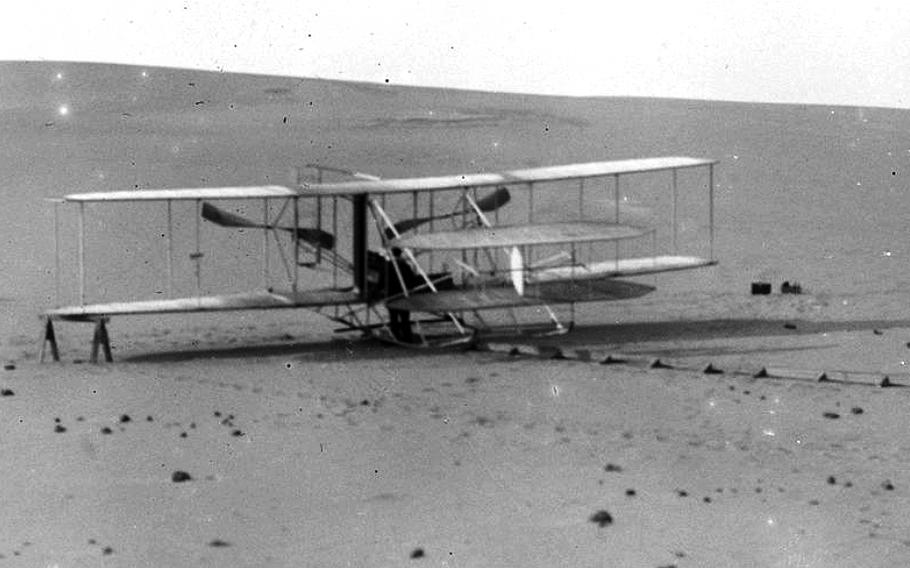 The Wright brothers' 1908 airplane was the first plane in America to fly a passenger, and the world’s first military aircraft. (First Flight Foundation)

NORFOLK, Va. (Tribune News Service) — The Wright brothers soared over Outer Banks dunes for about a minute in 1903 and, within five years, built the world’s first military airplane that could travel 125 miles.

The 1908 aircraft would be the first in America to carry a passenger and could cruise 40 mph, about as fast as a good racehorse. The Wrights’ success began a frenzy of flying experiments in Europe and America, quickly improving the “heavier-than-air flying machine.”

“The advancement between 1903 and 1914 when the war began is enormous,” said Tom Crouch, retired senior curator of the Smithsonian Air and Space Museum and author of three books about the Wrights.

The First Flight Foundation is funding a reproduction of the 1908 aircraft, to be built by vintage airplane builders Rick and Sue Young of Chester. The couple has constructed several Wright models over 40 years, Rick Young said in an email. Their work has helped them uncover some of the brothers’ methods, he said.

“While we know much about what the Wrights accomplished, how they accomplished it remains largely unknown,” Young said.

The replica will be donated to the North Carolina Museum of History after it is completed next year, he said.

After their historic flights on Dec. 17, 1903, the Wrights kept improving their aircraft in a pasture near their Dayton, Ohio, home until 1905, when they flew the world’s first “practical” aircraft, Crouch said. The plane could take off, maneuver and fly until the fuel ran out, he said.

The U.S. Army contracted with the Wrights to build one “heavier-than-air flying machine” for $25,000 that could carry a passenger, fly at least 40 mph and travel 125 miles, according to a copy of the original contract provided by Young.

The U.S. Army wanted it for surveillance rather than aerial dogfights. The Europeans would build those later.

The pilot and passenger would need to sit upright. Until then, the Wrights had flown by lying prone on the aircraft, believing it was better for aerodynamics. As it turned out, sitting upright did not bother flight.

The Wrights returned to the Outer Banks in May 1908 to test the remodeled 1905 machine. They made 22 flights over eight days. Then, Orville flew with their mechanic, Charles Furnas, seated next to him on May 14, 1908. Furnas was the first powered-airplane passenger in America.

The Wrights also sold a plane to French investors. Wilbur Wright flew in Europe to demonstrate the latest model for the first time publicly. The flights were a great success before thousands of spectators, including royalty, Crouch said.

Later in 1908, Orville was flying a plane with a passenger at then-Army base Fort Myer in Virginia when a propeller snapped and it crashed. Army Lt. Thomas Selfridge died, becoming the first powered-flight fatality. The Army realized it was a part failure, not a design flaw, and purchased a Wright plane anyway, Crouch said. Buy Photo
The grave of Lt. Thomas Selfridge, the first person to be killed in an airplane accident, at the U.S. Military Academy's cemetery in West Point, N.Y. (Stars and Stripes)

Later, Wilbur Wright taught three Army officers to fly, making them the first American military pilots in history and among the first in the world, Crouch said.

As war approached, European countries invested heavily in powered flight and were far ahead of the Americans by 1914, he said. When the United States entered war, American pilots flew mostly European aircraft.

The new 1908 replica is being donated in honor of the late Willard “Will” Gathings Plentl, Jr., a retired Air Force lieutenant colonel, the first director of North Carolina Aviation and former president of the First Flight Foundation.

The 1908 model will join the museum’s reproductions of the Wrights’ 1903 airplane and the 1902 and 1911 gliders, the release said. The Youngs also built the 1911 glider displayed in the museum lobby.