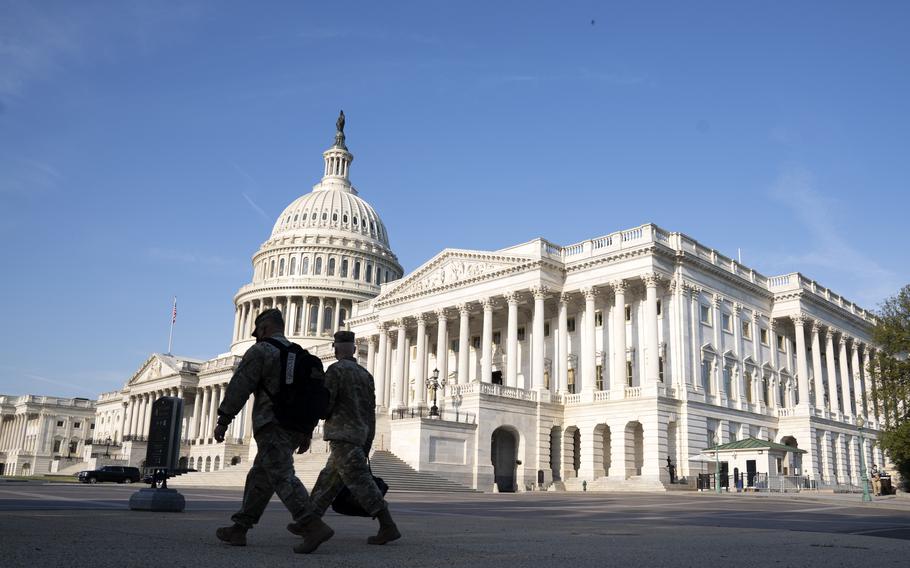 The U.S. Capitol in Washington is seen as National Guard members pass by on Thursday, May 20, 2021. (Jose Luis Magana/AP photo)

WASHINGTON — Health care coverage for National Guard members and reservists would be expanded under a bill introduced Tuesday, as calls to make benefits more equitable for these service members is gaining traction in Congress.

The bill from Reps. Andy Kim, D-N.J., and Trent Kelly, R-Miss., would allow all National Guard members and reservists to sign up for TRICARE Reserve Select, a premium-based health care plan, without additional fees or copays.

Now, only those who are called to active-duty status for more than 30 days are eligible for coverage. The Healthcare for Our Troops Act aims to expand access to affordable health care for about 130,000 members, or 16% of the Guard and Reserve, who lack private health insurance.

Kelly served as a combat engineer in the Mississippi Army National Guard for 35 years before his promotion to major general in December. The congressman said he has been pushing for four years to bring benefits and pay allowances for Guard members more in line with active-duty troops.

“It's just not fair to ask them to put their lives on the line and not have the same coverage and same benefits as their active counterparts,” Kelly said.

Kim said affordable care would be one small way to repay service members who kept him safe during his time in Afghanistan where he worked as a strategic adviser before being elected to Congress.

“We owe it to them. We’re constantly calling upon them at a moment’s notice,” the congressman said.

Last year, National Guard soldiers and airmen logged more than 10.9 million days of service to support missions in response to the coronavirus pandemic, extreme weather events, and civil protests and riots. It was more than four times as many days as Guard troops served in 2019, according to recent comments from Gen. Daniel Hokanson, the chief of the National Guard Bureau.

Amid a year of unprecedented levels of support from Guard members, Hokanson has been vocal on Capitol Hill about support for expanded health care coverage for troops.

Lawmakers have also raised alarm bells over gaps in medical eligibility for service members who go on-and-off duty orders in less than a month.

Last week, Hokanson testified at a Senate hearing that his No. 1 legislative priority this year is to get free health care for all Guard members.

“We always want the family members and the service members to know that no matter what we ask them to do, because we ask them to be ready at any time, that they're medically ready,” he said during a subpanel hearing of the Senate Appropriations Committee.

Another concern has been the ability for these troops to retain the same medical provider when going on and off orders.

“By having a standardized process in coverage, they could keep that same health care provider through all of it, which we think is really important,” Hokanson said.

Greater access to mental health care or counseling for members who do not have health insurance could also decrease the number of suicides in the National Guard, the general said.

The number of deaths by suicide in the National Guard rose from 90 in 2019 to 118 at the end of 2020, according to the Defense Department.

Hokanson first raised concerns over the issue of health care at a House hearing earlier this month.

He asked members of a subpanel of the House Appropriations Committee: “If [Guard members] don’t have health care, what happens if they get sick or injured when they come off orders? They’re doing the same job as their active or Reserve counterparts. Why are they treated differently?”

Kelly said he is in contact with Hokanson, as well as retired Brig. Gen. Roy Robinson, president of the National Guard Association of the United States, to look at what benefits will bring parity to the National Guard.

Budgetary concerns have caused a similar provision in the past to be held up in the Senate, but Kelly said lawmakers overwhelmingly agree these troops deserve the same benefits as other service members.

A previous measure from the congressman passed as part of the fiscal year 2020 National Defense Authorization Act, which sets annual spending and policy priorities for the Pentagon, made TRICARE Reserve Select eligible for all federal employees and National Guard federal technicians starting in 2030.

The provision was projected to save the government $1.6 billion in ten years, Kelly said, citing an analysis from the Congressional Budget Office.

Kelly said he also expects the latest bill to save the government money, and “it makes [the Guard] more ready and more ready to deploy, especially in light of all the missions that we're called upon and asked today.”

Especially in light of the pandemic, Kim said: “It’s good for our national security if we have healthy people in uniform. ... It just makes sense across the board.”