Most employers shy away from mandating coronavirus vaccines 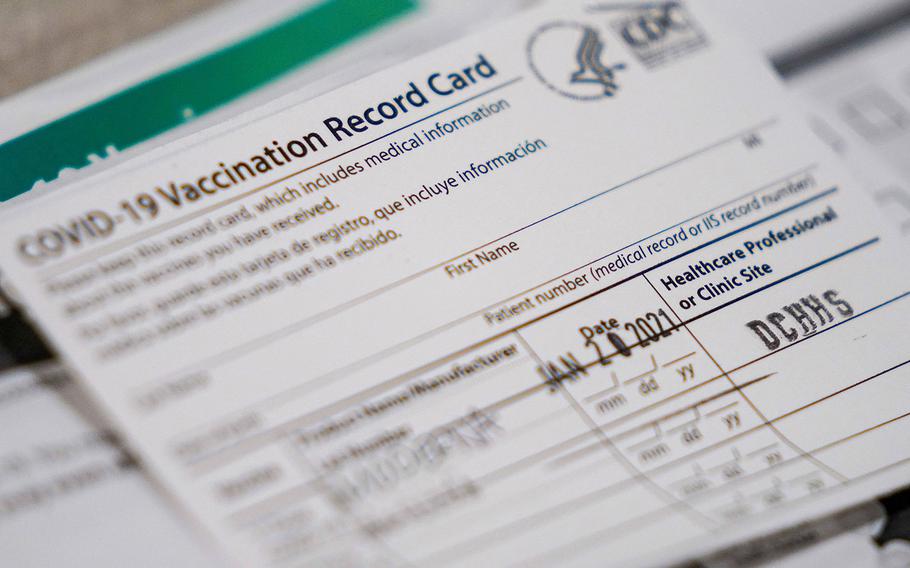 The email set out an ambitious — and uncompromising — goal: Get vaccinated or get ready to find another job.

"We must lead by example and get vaccinated ourselves," Houston Methodist CEO Marc Boom wrote his managers on March 31.

Boom's vaccine mandate is among only a handful issued by health-care institutions in America. While more than 380 colleges and universities, generally in blue states, and a few travel companies have imposed vaccine mandates, most other employers have held back, worried about the difficult politics surrounding the coronavirus vaccines and the untested legal issues involving vaccines cleared under the Food and Drug Administration's emergency authority.

Boom's mandate worked — more than 98% of the hospital's 26,000 employees are now vaccinated ahead of a June 7 deadline, including more than 3,000 who got the shots after Boom's call to action. But the hospital fired its director of corporate risk and insurance for refusing to get inoculated, and is now facing a broader backlash.

Several employees are vowing to skip the shot, rallying around Jennifer Bridges, a nurse who has worked in the hospital's coronavirus unit and who is threatening to sue. Bridges says she's willingly submitted to "every vaccine known to man," but believes the coronavirus vaccines need further study.

"It's like you're being forced to do this, whether you like it or not," said Bridges, who has attracted support from hundreds of donors on GoFundMe.

The clash in Houston reflects a messy dynamic playing out in workplaces and on college campuses around the country. Even as health experts clamor for incentives to convince wary Americans to get vaccinated, touting the shots' proven safety and effectiveness, Republican politicians, including Texas Gov. Greg Abbott and Florida Gov. Ron DeSantis, have explicitly barred state agencies from mandating vaccinations or issuing "vaccine passports" that would track whether people get shots.

"At least 36 states have attempted to pass legislation that you cannot compel people to get a vaccine as a condition of either employment or, sometimes, obtaining products and services," said Wendy Lazerson, a lawyer who co-chairs law firm Sidley Austin's labor and employment practice.

Lazerson added that the dynamics are changing by the day and the legal precedent is unsettled. "It's very hard to keep track of when we have to be mindful of the local, the state, and the national forces here, because they're all different," she said.

For instance, Miami-based Norwegian Cruise Line Holdings, which announced plans to require all passengers and crew members to be fully vaccinated, is locked in negotiations with DeSantis after the governor banned businesses from requiring proof of vaccinations. The cruise giant insists its plan is legal and has threatened to pull its business from Florida if the state does not allow it to move forward — a threat that DeSantis has publicly dismissed. CDC has recommended, but not required, that cruise passengers and crew get vaccinated.

Lawyers and public health officials say they're trying to navigate a legal thicket that applies court precedents to this pandemic's unprecedented events. All states have school vaccination requirements for children, and the Supreme Court in 1905 upheld a state vaccine mandate, Kaiser Family Foundation analysts noted in a recent brief.

And the courts have generally given governments broad latitude during a public health emergency to take drastic steps that health authorities say will save lives. That imperative appeared to be reflected in December guidance from the Equal Employment Opportunity Commission that many interpreted as a signal that employers can mandate coronavirus vaccines, with some limits.

But the issue is complicated by the fact that the Pfizer-BioNTech, Moderna and Johnson & Johnson vaccines were cleared under the FDA's emergency authority — an expedited process with a lower standard of evidence permitted during a public health crisis. Only one vaccine was previously authorized that way. Pfizer and partner BioNTech have begun the lengthier process seeking full approval, and the other companies are expected to follow suit, but those regulatory decisions are probably months away.

Employers say they're struggling in the absence of national policies or clear legal parallels. Federal officials reiterated this month that they have no intention of requiring vaccine passports, let alone mandating vaccinations. The Centers for Disease Control and Prevention abruptly announced last week that vaccinated Americans could go without masks even indoors and in large groups in many instances, raising alarms the United States' approach to vaccinations will devolve into an honor system, at best, and a free-for-all at worst.

"If you want to dine with us without a mask, that's awesome. come on down. but in order to do that please BRING YOUR VACCINE CARD WITH YOU! it's that simple," restaurant owner and chef John Perkins wrote to customers on May 14, shortly after St. Louis officials said they would follow CDC's recommendation and drop local masking requirements for vaccinated people.

After receiving complaints, Perkins sent a follow-up email the next day responding to questions like "Can't you just trust people to do the right thing?"

"Look, I still don't want us to be the mask police, or the vaccine card police," Perkins wrote. "But [officials'] declaration effectively makes us that, whether or not we want to be."

In an interview with The Washington Post, the restaurant owner said he had been trying to prevent "pandemonium" that might be unleashed by the masking decision, adding that some staff members and patrons fault him for being too focused on virus safety issues, while others believe his measures don't go far enough. For instance, Perkins said he won't require his workers to get shots — although he has offered a $50 incentive to do so.

Whether a hospital CEO or restaurant worker, all Americans are trying to navigate a patchwork of coronavirus guidances and a vaccine rollout that has varied significantly throughout the country.

In the Northeast, states like Massachusetts, New Hampshire and Vermont have vaccinated at least 60% of their residents. In the South, states like Alabama, Georgia and Mississippi remain under 38%. And while public health officials in California's Santa Clara County are requiring employers to determine the vaccination status of workers before reopening offices, health officers in some GOP-led states have been fighting to hold onto their ability to take certain emergency actions at all.

"The U.S. has no 'proof of vaccination' system and the Biden administration refuses to support such a system of verification," Lawrence Gostin, who leads Georgetown University's O'Neill Institute for National and Global Health Law, said in a statement last week. "This ambiguity serves no one, and leaves the public more confused about how to keep themselves safe."

"I'm unsure of the next turns from here," added Stanford University law and medicine professor David Studdert. He co-wrote a March 31 essay in the New England Journal of Medicine that addressed the policy and ethical considerations of vaccine passports — which have been overtaken by the rapidly evolving events of the past two months, he said.

"Whatever you want to call them, 'passport'-like requirements are happening," Studdert added, referencing colleges' growing efforts to mandate coronavirus vaccinations.

The American College Health Association in April recommended that all schools, when possible under state law, require that students be vaccinated against the coronavirus, noting that campus conditions — like having students housed closely together in dormitories — can make it easy for a virus to take hold and spread.

"I'm hoping we can get to a point where we deal with this like we deal with other vaccine-preventable diseases," said Anita Barkin, co-chair of ACHA's Covid-19 Task Force. For instance, about 88 percent of schools require some form of measles vaccination requirements, the group has found.

But administrators' coronavirus decisions appear to be politically tinged. Of the nearly 400 colleges that have moved to mandate coronavirus vaccinations as of Thursday evening, according to the Chronicle for Higher Education, about 25 are located in states won last year by former president Donald Trump.

"It's not surprising," Barkin said. "There's been a lot of political banter during the pandemic that's made it very hard at points for us to have a consistent public health message regarding mitigation strategies and vaccination."

At least one college leader who called for a vaccine mandate backed down amid local pressure.

Nova Southeastern University, a private university in Florida, on April 1 announced that it would require students and faculty to get vaccinated against the coronavirus — a plan that was swiftly paused when DeSantis issued an executive order the next day that banned vaccine passports in the state. NSU President George Hanbury on May 5 released a statement that the school would instead push for voluntary vaccinations and praised DeSantis for helping with the "mammoth effort" to vaccinate the state.

That announcement "is the only information on the updated covid-19 protocols being provided by NSU at this time," spokesperson Joe Donzelli wrote in an email last week, declining to answer The Post's questions about why the school changed its policy.

Meanwhile, some colleges that took aggressive action to combat the pandemic last year have been more circumspect about mandating vaccinations this spring.

West Virginia University President Gordon Gee wrote in March 2020 that universities must "lead and not follow" when combating the coronavirus, as he touted his school's rapid efforts to shift courses online, cancel athletic events and take other precautionary steps. But the school won't require shots, even though West Virginia Gov. Jim Justice, R, has said he's open to it.

"While WVU is not currently requiring vaccination, we are strongly recommending it and we have created an incentives plan," spokesperson April Kaull said in a statement, pointing to a plan that says more student activities can resume if the school community hits an 80 percent vaccination rate.

Lynn Pasquerella, president of the Association of American Colleges and Universities and a medical ethicist, said she's worried that academic leaders aren't thinking about the long-term implications for their students.

"The least we can do is to help students by not having them have to worry about whether the person next to them is a carrier of covid-19, or whether they're going to get sick in the classroom," she said.

Boom, the Houston Methodist CEO, made a similar case to other employers.

"It's the right thing to do. It's what protects vulnerable people," Boom said, touting his organization's own data on the shots' effectiveness. "The most common thing I've heard from the community of our existing patients is a big, huge, thank you."