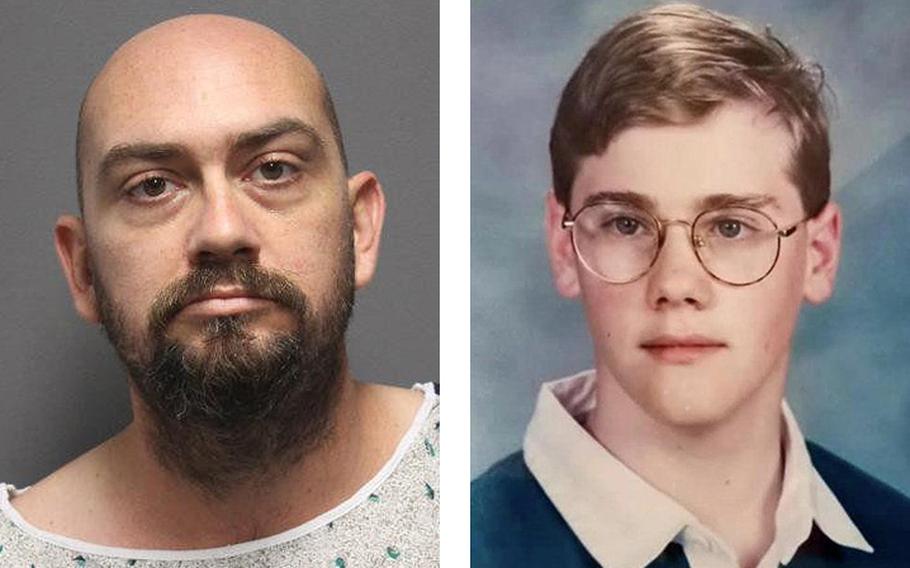 The 21-year-old son of an Air Force colonel, he was living abroad at a U.S. military base when he was found dead off a walking trail in the woods in Southwest Germany in 1999.

While two decades and the Atlantic Ocean separate Whitehurst's slaying from those of the Columbia County women, all three victims, prosecutors believe, were bludgeoned to death by the same man.

It's the similarities in the cases that recently brought local prosecutors to label Harold David Haulman III, now 42, a serial killer.

His German criminal case is behind him and his two Pennsylvania murder cases are in the early stages, but it appears police are not done investigating Haulman's past.

Luzerne County Assistant District Attorney Daniel Zola said Haulman is a suspect in the case of Ashley Parlier of Michigan, who had a diminished mental capacity and was pregnant when she went missing in 2005 at age 21, according to published reports.

According to woodtv.com, a Michigan news station, Calhoun County sheriffs labeled Haulman a person of interest in the Parlier case after Pennsylvania officials contacted them following a Jan. 4 interview with Haulman. Haulman mentioned the Parlier case, according to the arrest papers filed against him.

The Battle Creek Enquirer reported that police searched woods south of Battle Creek in March, acting on the information from Pennsylvania. As it was in the searches after her disappearance, nothing was found.

Haulman lived in Battle Creek, Michigan, from 2002 to 2009, working as a truck driver, according to the news station. In fact, when the Federal Bureau of Investigation interviewed him on Dec. 23 in the Shultz case, he was in Battle Creek.

In addition to Pennsylvania, where he also drove a truck, Haulman has also lived in California, Maryland and Illinois.

Whitehurst was never heard from after May 30, 1999. A search by German and military police resulted in the discovery of his body a few days later in the woods outside Ramstein Air Base, according to Stars and Stripes articles. He was the son U.S. Air Force Col. Dr. Lawrence Whitehurst, commander of the 86th Medical Group at the time.

The body of Whitehurst, who was also known as "Jay," was covered with leaves near a bloody club in a stretch of woods popular with locals for recreation. He had "massive head injuries," an article states.

When Haulman was apprehended by German police on June 5 for an unrelated incident, he confessed to the Whitehurst murder, according to the news account. He and Whitehurst were not close friends, but had met in Ramstein area nightclubs.

Haulman, of his own admission, told German police he killed Whitehurst in the early hours of May 30, 1999. Haulman said he and Whitehurst were sitting around a campfire when Whitehurst began dancing around the fire. Haulman felt threatened by it and delivered a fatal blow to Whitehurst's head with a club, Stars and Stripes reported. (Police working on the Phillips case said Haulman took her into the woods in Butler Twp., telling her he was going to build a campfire.)

German authorities told Stars and Stripes Haulman had been living in Germany for a few years. When his father moved to Turkey, Haulman stayed behind, living with a girlfriend. When that relationship ended, Haulman lived in the woods between Ramstein Village and the air base.

Facing a manslaughter charge, he eventually entered a guilty plea at age 20 in German court. Under German law, a person under the age of 21 can be tried in juvenile court, and that's where prosecutors settled on charging him. The adult sentencing would have carried a 5- to 15-year prison term, while the juvenile term was up to 10 years, according to the publication.

Zweibrucken court showed Haulman leniency because of a "diminished mental state," specifically an apparent schizophrenia diagnosis, according to Stars and Stripes. He was ordered to serve his six-year sentence at a German reform school.

Haulman wasn't from southern Luzerne County but investigators would learn his alleged killing ground was there when they found Shultz's remains.

Investigators said Haulman was living in Duncannon when he met Phillips and Shultz through online dating sites. Prosecutors allege he mauled and stabbed them in the same wooded area.

Phillips, a mother of two who grew up in Snyder County, disappeared June 13, 2018. She was dating Haulman, who admitted the killing to his wife after she learned he had an affair with Phillips.

Phillips was reported missing on Aug. 21, 2018. Despite multiple searches, her remains were never found. Investigators were told Haulman tossed Phillips' body in a dumpster at AMC Classic Bloomsburg II, a movie theater along Route 11 in Scott Twp., after her murder.

Shultz disappeared Dec. 2 after telling a friend she had concerns about "Dave," whom she planned to meet. She was reported missing on Dec. 6 when she didn't show for a shift at Weis Markets in Bloomsburg. "A young woman of habit, it was immediately concerning for her family when the next day no one heard from her," Zola said. "She simply vanished, which was inconsistent with her daily routines," he said.

Shultz, who was autistic, never contacted family in that time and, as police investigated they tied Haulman to her murder. A review of his phone records would link him to her death, police said.

It was Shultz's phone that got Luzerne County officials involved in the case after investigators found her cell phone crossed into their jurisdiction — traveling directly from her Bloomsburg home to Hobbie Road in Butler Twp.

"We immediately took an active role from that point on," Zola said. He and county Det. Shawn Williams were assigned to the case and began working with Bloomsburg police and eventually state police at Hazleton, the Federal Bureau of Investigation and other agencies who made finding Shultz a "top priority." Also involved in the investigations were Berwick police and the Columbia County District Attorney's Office.

Haulman was apprehended on Dec. 27 after a Norfolk Southern police officer saw him walking along railroad tracks in Duncannon with a self-inflicted arm wound caused by a box cutter. Haulman told the officer he needed "to die for (his) sins." While receiving treatment at a hospital, he talked about killing both Shultz and Phillips, and told police where to find Shultz's body. It was located that same day.

He eventually confessed to hitting Shultz with a mallet-type hammer and then stabbing her. He admitted to killing Phillips, too.

But it wasn't only his confession to police that led them to file charges. A confession to his estranged wife about the Phillips murder was among the evidence. Haulman allegedly authored a confession letter to his former spouse who in turn, gave it to investigators, court papers state. According to investigators, he gave the former wife the note in the hopes of restoring their failed marriage.

Haulman faces criminal homicide, kidnaping and abuse of a corpse in both Pennsylvania cases. He waived his right to a preliminary hearing in the Shultz case earlier this month on the same day was charged in the Phillips murder. He has been in jail since his Dec. 27 arrest, having been denied bail due to the homicide charge.

He has told police he has no intention of taking the cases to trial.