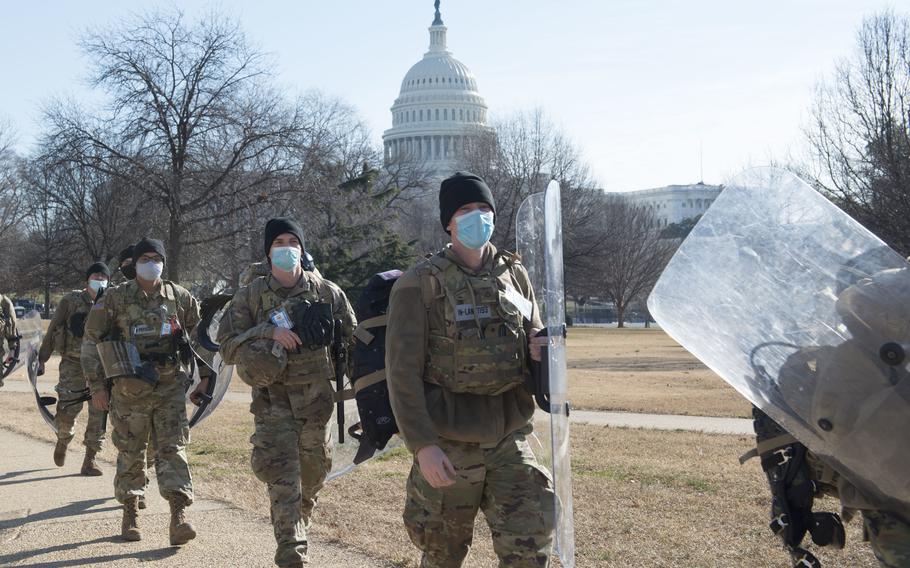 WASHINGTON — With the National Guard’s monthslong deployment to the Capitol in its final days, congressional lawmakers are considering whether to create a dedicated force to respond quickly if troops are needed again.

Rep. Rosa DeLauro, D-Conn., chairwoman of the House Appropriations Committee, introduced a $1.9 billion Capitol-security funding bill Friday to address costs of the Jan. 6 riot. The bill, in part, would create a standing force in the D.C. National Guard dedicated to crisis response.

Thousands of Guard troops from across the country deployed to Washington after the Jan. 6 riot at the Capitol building. Almost 2,150 Guard members remain in the region supporting that mission, which is scheduled to end Sunday, chief Pentagon spokesman John Kirby told reporters Wednesday.

While the majority of the funds would reimburse the National Guard, Capitol Police and the District of Columbia for costs incurred in the response to the riot, the bill allocates about $200 million to create the quick-reaction force.

“This emergency supplemental appropriation addresses the direct costs of the insurrection and strengthens Capitol security for the future,” DeLauro said in a statement Friday. “The needs are urgent, so it is imperative we swiftly pass this legislation to protect the Capitol and those who work and visit here.”

But Rep. Mike Rogers, R-Ala., and Sen. Jim Inhofe, R-Okla., on Wednesday announced their opposition to creating the quick-reaction force in a statement commending the National Guard for their efforts but declaring “it’s time they return home and focus on their core mission.”

Instead, Rogers and Inhofe suggested creating a quick-reaction force within a federal civilian law enforcement unit, which they said “improves the range of law enforcement capabilities, streamlines operations beyond the Capitol and would likely cost much less than tapping the National Guard for this purpose,” according to the statement. “If Democrat leadership wants to spend an additional $200 million on the National Guard, it would be better spent on rebuilding Guard readiness that suffered as a result of this over-long deployment to Capitol Hill.”