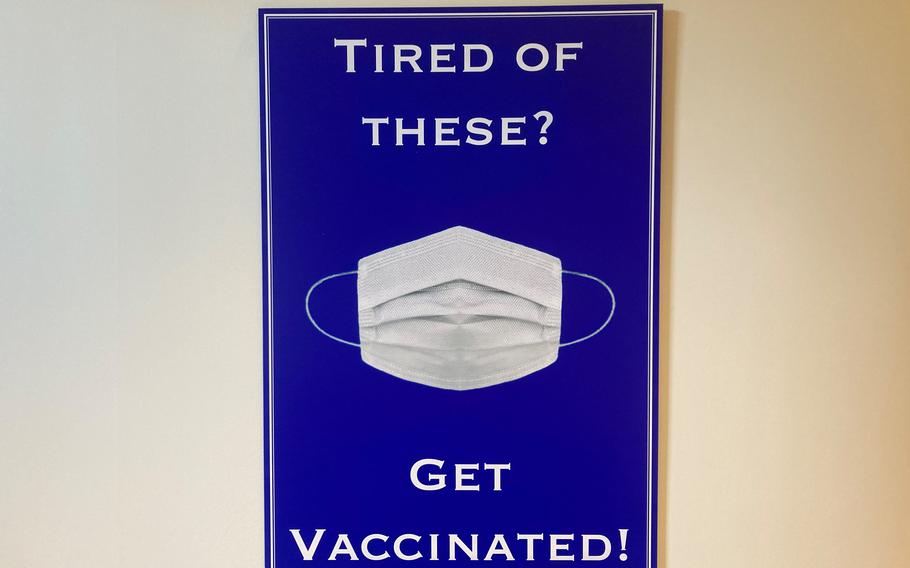 A poster in the Pentagon on Thursday encourages personnel to get their coronavirus vaccine to remove their masks in Defense Department facilities. (Caitlin Doornbos/Stars and Stripes) (Caitlin Doornbos)

WASHINGTON – The Pentagon on Thursday issued a memo on ways to encourage and promote coronavirus vaccinations as the military wrestles with convincing service members who have not received the shots to do so.

The Defense Department is “moving into a new phase of our efforts” now that vaccine access has improved and “reaffirms support for initiatives to increase vaccination acceptance among all service members,” Deputy Defense Secretary Kathleen Hicks and Air Force Gen. John Hyten, vice chairman of the Joint Chiefs of Staff, wrote in the memo.

Since January, the challenge for the military’s medical community was vaccinating all those who wanted the shot. Now, as the vaccine has become more widely available, the issue is with demand, Army Lt. Gen. Ronald J. Place, director of the Defense Health Agency, told reporters Thursday at the Pentagon.

About 58% of Defense Department personnel have received at least one dose of a coronavirus vaccine – 44% of whom are now fully vaccinated. But there has been a “slow decrement in the amount of people who come to our vaccination sites over time,” Place said.

Defense officials have said the department does not keep data on how many service members refuse the vaccine.

“Before, it was supply – we had more people who wanted it than we had vaccines for,” Place said. “Now, based on the increase in manufacturing and those that really, really wanted it largely have gotten the vaccine, it’s people on the fence or people who, quite frankly, for whatever their personal reasons have decided not to.”

To boost vaccination rates, Place said the department aims to spread information and “show people true data” about the vaccine to dispel concerns about its efficacy.

“One of the reasons why I’m pounding a little hard on how effective it is in our community is because there’s a lot of people who think it’s not an effective vaccine,” he said. “This suite of vaccines are incredibly effective.”

Of the approximately 1.5 million military medical beneficiaries who have been fully vaccinated, about 1,640 tested positive for the coronavirus while vaccinated – 24 of whom were hospitalized, but none died, Place said.

“If you do that math, that’s 99.9% effective for our beneficiaries of preventing breakthrough infection and 99.999% effective in preventing hospitalization,” he said.

The Pentagon in its memo also emphasized the power of information on increasing vaccination rates, urging leaders to continue engaging with service members regarding their vaccination concerns.

“These conversations are not easy, they may not be short, and they may require multiple touch points, but they are critically important,” Hicks and Hyten wrote in the memo. “We know from our experience within the department that use of this approach works and encourage its widespread adoption.”