‘He made the Rangers’ 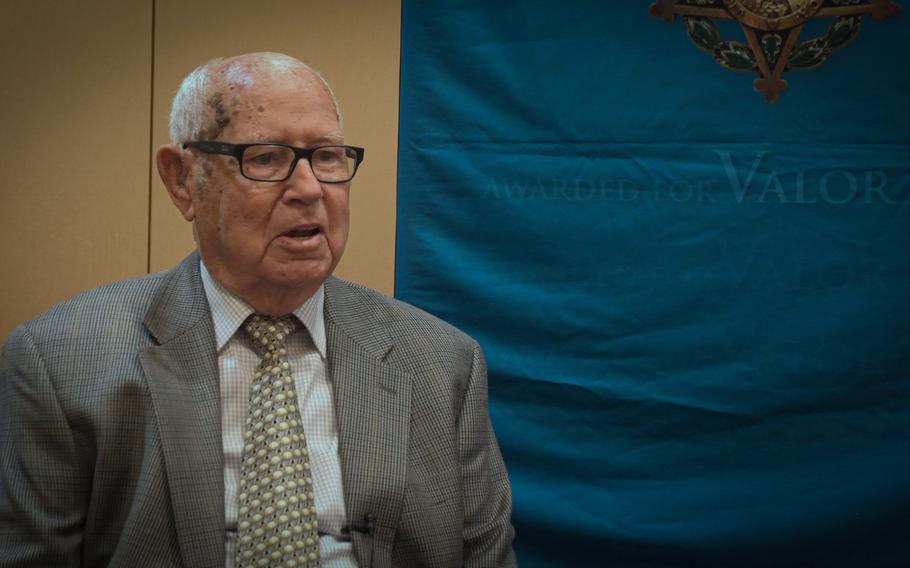 Retired Master Sgt. Merle Simpson, a former member of the Eighth Army Ranger Company who served under Col. Ralph Puckett during the battle for “Hill 205” during the Korean War. Puckett is set to receive the Medal of Honor during a ceremony Friday, May 21, 2021. (Ken-Yon Hardy/Stars and Stripes) (Ken-Yon Hardy) Col. John Locke, a retired Army Ranger, spearheaded the effort to secure the Medal of Honor for Col. Ralph Puckett. The process took 18 years and included multiple appeals to Army boards. Puckett is set to receive the medal during a ceremony Friday, May 21, 2021. (Ken-Yon Hardy/Stars and Stripes) (Ken-Yon Hardy) Martha Puckett Wilcoxon, the daughter of Col. Ralph Puckett, pictured in Arlington, Va., on Thursday, May 20, 2021. Col. Puckett is set to receive the Medal of Honor during a ceremony May 21. Wilcoxon, as well as Col. Puckett’s wife, son and six grandchildren, will accompany him. (Ken Yon-Hardy/Stars and Stripes) (Ken-Yon Hardy)

WASHINGTON – Col. Ralph Puckett, the 94-year-old retired Army Ranger who will receive the Medal of Honor on Friday, is a fair and honest leader and humble man who has greatly influenced the men he commanded and countless other Rangers he’s mentored over the past seven decades, his friends and family said Thursday.

One of those men, Master Sgt. Merle Simpson, said Puckett taught him and other soldiers to be better, to be like him. Simpson, 92, served under Puckett during the Korean War. When he found out earlier this month that Puckett would be awarded the Medal of Honor, Simpson wondered why he hadn’t received it years ago.

“I thought time had run out,” Simpson said. “I didn’t think I would be here, let alone Ralph, who’s two years older. So this is all really something.”

President Joe Biden will award the Medal of Honor to Puckett at the White House on Friday. Simpson, as well as Puckett’s other friends and his wife, daughter, son and six grandchildren, will attend the ceremony.

Biden called Puckett on April 30 to let him know he would receive the award.

“It was quite a shock,” Puckett said. “I was surprised I received a call from the president. I never thought he’d be calling to speak to me.”

Puckett is being awarded for actions he took more than 70 years ago, in November 1950.  As a young first lieutenant in the Korean War, Puckett commanded the Eighth Army Ranger Company during a mission to seize “Hill 205” and defend it against a series of assaults by the Chinese.

Puckett led 51 Army Rangers and nine Korean soldiers to capture Hill 205. He intentionally ran across an exposed area multiple times to draw enemy fire away from his soldiers, allowing them to destroy enemy positions.

After they’d captured the hill, the company faced multiple chaotic attacks. Puckett was wounded by a hand grenade during the first attack but refused evacuation.

“Throughout the attack, he’s wounded and could’ve been evacuated,” said Col. John Locke, who spearheaded the effort to get Puckett the Medal of Honor. “He made his way around the perimeter, called in artillery fire and distributed all of his ammunition so his soldiers could keep fighting.”

One of those soldiers was Simpson.

“If he hadn’t called in the artillery, we’d all been gone,” Simpson recalled.

As the Chinese overran them, Puckett was told over his radio that supporting artillery fire was no longer available. His company continued to fight, and Puckett was wounded two more times by enemy mortar rounds.

Puckett ordered his company to evacuate the area and told the soldiers to leave him behind. Two of his Rangers disregarded the order and carried Puckett off the hill to safety.

“How many guys would be wounded on the battlefield and ask people to go and leave him? I mean, I couldn’t understand that,” Simpson said. “But his soldiers thought enough of him that they got him out.”

Locke, a retired Ranger, led the effort to secure the Medal of Honor for Puckett after he came across the story of Hill 205 while writing a book on the Rangers’ history. He succeeded after 18 years, multiple appeals and the help of the late Sen. John McCain, R-Ariz.

Puckett risked his life over and over again, Locke said. But Thursday, Puckett credited Simpson and the rest of his company for earning the Medal of Honor.

Puckett had a 22-year military career, during which he also served in combat in the Vietnam War. He retired in 1971 with two Distinguished Service Crosses.

After leaving the Army, Puckett maintained a presence within the Ranger community, often volunteering as a speaker and adviser. Col. Robert Choppa, a retired chief of infantry at Fort Benning in Georgia, said Puckett was revered in the Army, and he’s now considered the “grandfather of the Rangers.”

Into his mid-1980s, Puckett would run alongside classes of future Rangers. He still watches the Ranger Physical Fitness Tests and attends Ranger graduations and other events, taking the time to talk to everyone.

“Ralph is absolutely loved in the Ranger community,” Choppa said. “There’s a ton of Ranger regimental commanders going back 20 year that were mentored by Ralph Puckett. Everybody has a Ralph Puckett story.”

Choppa lives near Puckett and his wife, Jean Martin, in Columbus, Ga. The other day, Choppa visited the couple and read aloud the Medal of Honor citation that Biden will read Friday at the White House.

“I read the citation, and Ralph said, ‘It just sounds to me like I did my job,’ ” Choppa said. “That’s the kind of guy he is. He gives all the credit to the Rangers who fought on Hill 205.”

Simpson knows Puckett gives his soldiers all the credit, but he disagrees. He and the other soldiers fought that hard because that’s what Puckett taught them, he said.

“He says his Rangers made him,” Simpson said. “But he made the Rangers.”