Sgt. 1st Class Alwyn Cashe’s name now graces the primary ceremonial grounds at Fort Stewart, Ga., which were renamed Thursday in honor of the fallen Iraq War hero by 3rd Infantry Division officials as they await word on a proposal to award the Medal of Honor to the soldier. (3rd Infantry Division/Flickr)

Sgt. 1st Class Alwyn Cashe’s name now graces the primary ceremonial grounds at Fort Stewart, Ga., which were renamed Thursday in honor of the fallen Iraq War hero by 3rd Infantry Division officials as they await word on a proposal to award the Medal of Honor to the soldier.

Long known as Marne Gardens — in honor of the 3rd ID’s nickname the Rock of the Marne — the now Cashe Gardens sits just outside the division’s headquarters near Fort Stewart’s main gate and hosts hundreds of ceremonies each year marking promotions, command changes and other military milestones. Fort Stewart leaders have long planned to honor Cashe in some way on the post and renaming Marne Gardens in his honor seemed appropriate, Army Command Sgt. Maj. Quentin Fenderson said Thursday.

“Whenever a soldier comes here in the future they will think of the heroism of one of our own Dogface soldiers,” said Fenderson, who served with Cashe in Iraq and has since risen to become the 3rd ID’s senior enlisted leader. Third Infantry Division troops are nicknamed Dogface soldiers. “Anytime anyone wants to be inspired they will always have this garden in the Marne Division that shares a name with this hero.”

Fenderson, other Fort Stewart officials and Cashe’s family members unveiled a sign Thursday at Cashe Gardens memorializing the revered soldier’s final battlefield act — when on Oct. 17, 2005, he repeatedly entered a burning Bradley Fighting Vehicle after it struck a roadside bomb to pull his subordinate soldiers to safety. Cashe suffered mortal burn wounds during the incident and died of them Nov. 8, 2005. He was posthumously awarded the Silver Star medal for his actions, credited with saving multiple lives, but soldiers and members of his family for years have felt he deserved the Medal of Honor.

“Our fight is not over. We are one step closer,” Kasinal Cashe White, Cashe’s older sister, said Thursday. “We are waiting on the Medal of Honor. We know that will happen.”

Last year, Congress passed a law for Cashe waiving the five-year time limit for Medals of Honor to be awarded. Former President Donald Trump signed that bill into law in December, signaling Cashe’s award upgrade was imminent. But even after defense officials said they expected Trump to present Cashe’s family the Medal of Honor, it did not occur before President Joe Biden was sworn into office. 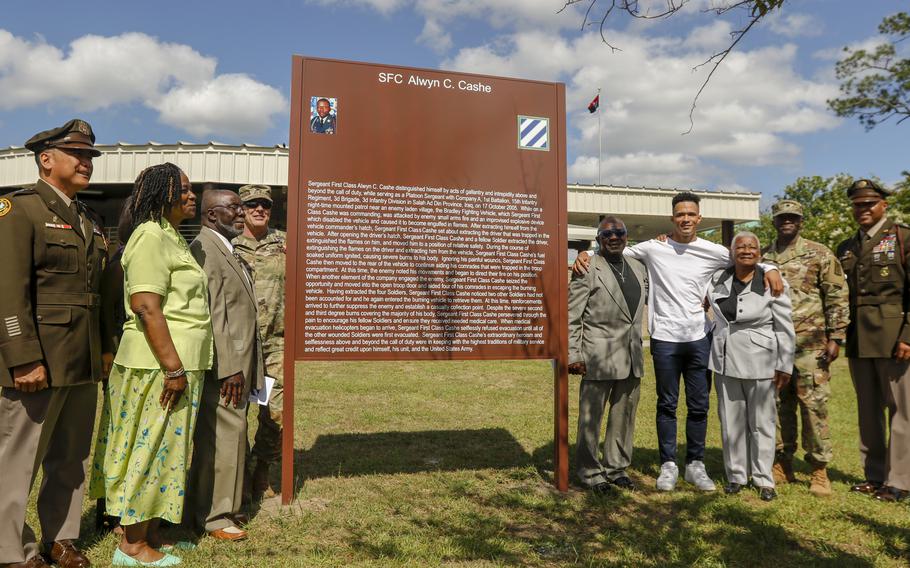 The 3rd Infantry Division dedicates the Sgt. 1st Class Alwyn C. Cashe Garden, to honor the Silver Star Medal recipient for his acts of gallantry, at Fort Stewart, Ga., on Thursday, May 20, 2021. Members of the Cashe family joined the 3rd ID command team for the ceremony and unveiling of the Cashe Garden sign. (Savannah Roy/U.S. Army)

Biden’s White House has not publicly commented on the proposal to award the Medal of Honor to Cashe, and officials did not return a request for comment Thursday. Pentagon officials have said top defense officials have endorsed the upgrade.

Among those who have backed the Medal of Honor for Cashe is Army Lt. Gen. Gary Brito, the service’s personnel chief, who in 2005 was the commander of Cashe’s battalion, the 1st Battalion, 15th Infantry Regiment, a part of the 3rd Infantry Division stationed at Fort Benning, Ga. Brito, who attended the ceremony Thursday but did not make public comments, has previously said he recommended Cashe for the Silver Star without a complete picture of the soldiers heroism. Brito has advised Defense Department leaders since at least 2014 to award the Medal of Honor to Cashe.

Cashe, who was 35 at the time of his death, was an infantry platoon sergeant on his third deployment to Iraq in October 2005. On Oct. 17, he was conducting a nighttime route clearance operation near Daliaya, some 75 miles north of Baghdad, when his Bradley — carrying 10 soldiers and an Iraqi interpreter — struck an improvised explosive device. Cashe, only slightly injured in the blast, escaped the armored vehicle just before it erupted into flames. He immediately began working to rescue his fellow troops. Cashe first helped the driver out of his front hatch, extinguishing flames that had burned the driver before turning to the back of the Bradley, where eight soldiers and an Iraqi interpreter were trapped inside the burning vehicle.

Cashe, his uniform covered in fuel, reached into the back of the flaming vehicle to pull the first of the soldiers out, immediately setting his uniform on fire.

“Flames quickly spread all over his body,” the Army citation for his initial Silver Star reads. “Despite the terrible pain, Cashe placed the injured soldier on the ground and returned to the burning vehicle to retrieve another burning soldier.”

He repeated the act until all of the men had escaped the Bradley, taking charge of the hectic situation, even as they withstood enemy gunfire.

“All the while, he was still on fire,” according to the Silver Star citation.

Seven of the 10 American soldiers in the Bradley, including Cashe, were seriously injured in the blast and fire. The interpreter and three other soldiers — Staff Sgt. George Alexander Jr., 34, Sgt. Michael Robertson, 28, and Spc. Darren Howe, 21, — also died of burns suffered in the incident. If not for Cashe’s actions, according to the Army, all of the men in the Bradley would likely have perished.

Fenderson said Thursday that Cashe would have dismissed talk of his heroics or the public effort to upgrade his Silver Star to the Medal of Honor.

“We know he wouldn’t want any of this. He wasn’t that type of guy,” Fenderson said. Cashe was “strong willed, southern, we knew he could overcome anything. [He was] not fancy, just tough.”

Even without the highest military award for combat valor, Cashe White said Thursday that her family was deeply appreciative of the 3rd Infantry Division’s new honor for her brother.

“This is very important to us,” she said. “To the 3rd ID — this [honor] is more important to us than anything. We really, really appreciate everything you guys have done and are doing.”