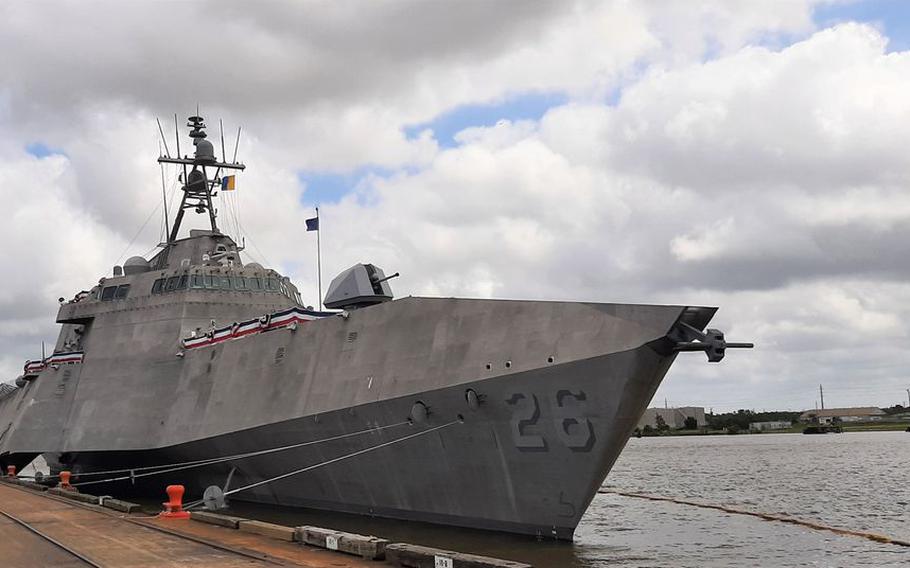 LCS-26 sits at a dock on the Mobile waterfront on May 20, 2021, prior to its commissioning as the USS Mobile. (Lawrence Specker, al.com/TNS) 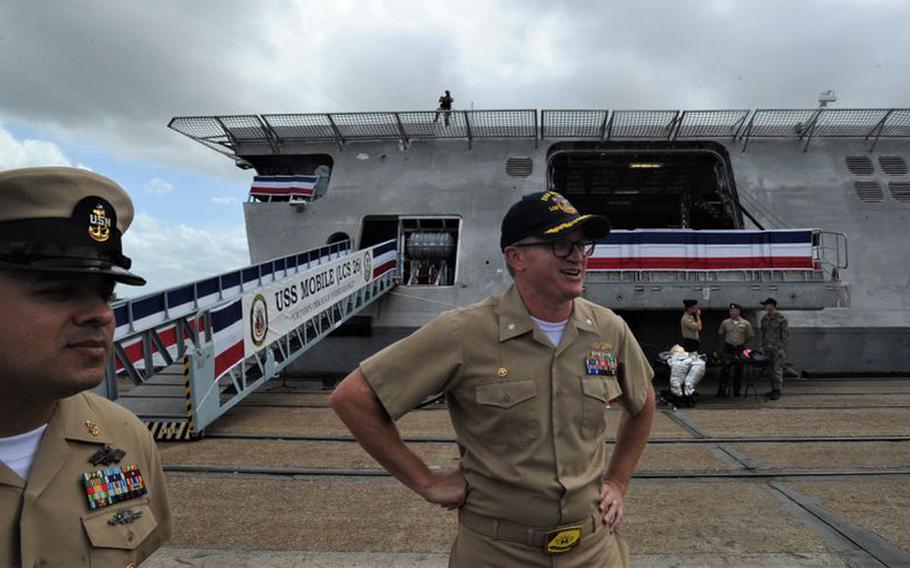 Command Senior Chief Raymond Cabral, left, and Cmdr. Christopher W. Wolff, commanding officer of LCS-26, speak on May 20 ahead of commissioning ceremonies for the Littoral Combat Ship named for the city of Mobile. Wolff sports the "plank holder" belt buckle limited to the vessel's crew at its commissioning. The buckles bear the ship's motto, "Victory Through Perseverance," and the purple-and-gold logo of a Mardi Gras flag used in Mobile. (Lawrence Specker, al.com/TNS) 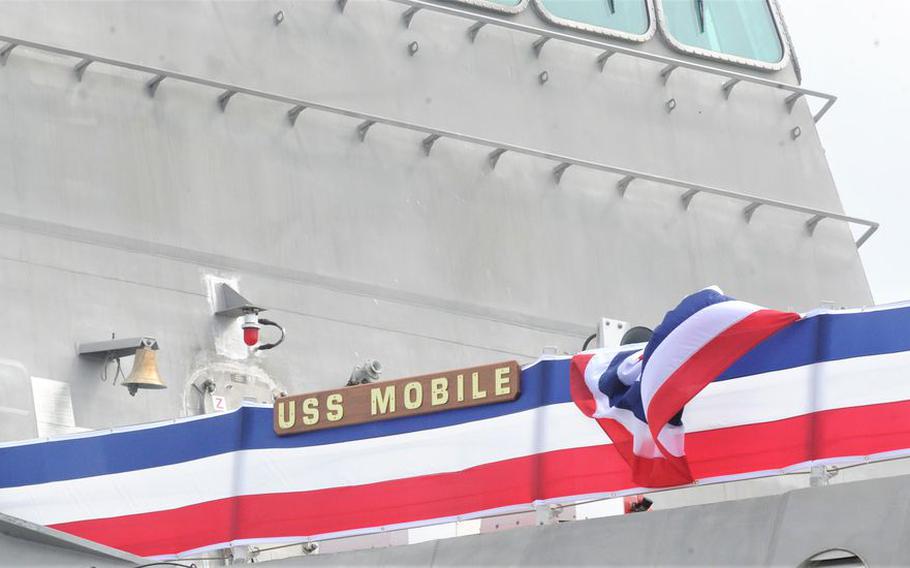 A plaque displays the name that LCS-26 will formally assume at its commissioning ceremony on May 22, 2021. (Lawrence Specker, al.com/TNS) 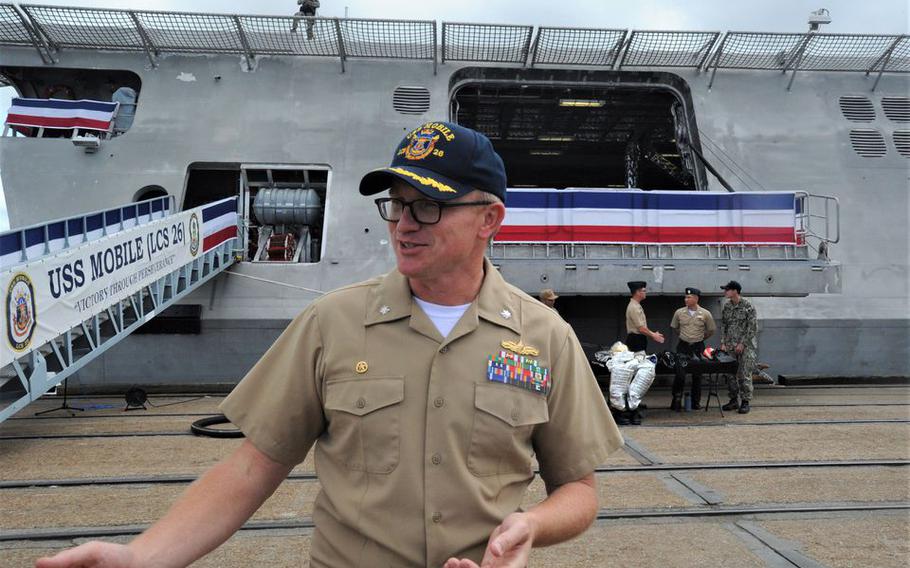 Cmdr. Christopher W. Wolff, commanding officer of LCS-26, speaks on May 20 ahead of commissioning ceremonies for the Littoral Combat Ship named for the city of Mobile. (Lawrence Specker, al.com/TNS)

MOBILE, Ala. (Tribune News Service) — Preparing for a commissioning ceremony that will serve as both a celebration and a farewell on Saturday, LCS-26 and its crew stood ready Thursday at Pier 2 on the Mobile Waterfront.

On Friday, the city will roll out a “Tardy Gras” parade celebrating a rare convergence: A U.S. Navy ship built in a city, with the name of that city, being commissioned in that city. Up until now the 13th Independence-class Littoral Combat Ship built by Austal USA has been referred to as “the future USS Mobile.” On Saturday, it officially becomes the USS Mobile.

The crew of 70 has spent months in Mobile, readying for the moment.

“There’s definitely some mixed emotions, the crew is very excited to go home and to be back with family and friends in San Diego,” said Cmdr. Christopher W. Wolff, commanding officer of the vessel. “And really I think they’re also excited for the opportunity to get out and operate, to get the ship under way, steam south, through the Panama Canal transit, and head back up to San Diego. It’s kind of a big voyage with a relatively green crew.”

(Wolff hastened to add that crewmembers have experience on other platforms and are only green in the sense that this will be their first voyage as the crew of this new vessel.)

“I think a lot of the crew has really embraced the culture and spirit of Mobile,” said Command Senior Chief Raymond Cabral, the ship’s senior enlisted officer. “They’re definitely going to miss the city.”

As they spoke, Wolff and Cabral sported some distinctive hardware: belt buckles limited to the “plank owners,” the crewmembers serving aboard the ship at its commissioning. The buckles featured both the ship’s motto, “Victory Through Perseverance,” and the purple-and-gold logo from a local flag designed specifically to represent Mobile’s Mardi Gras history. Wolff said that Stephen McNair, the preservationist who led the campaign to establish the flag, had enthusiastically supported the crew’s appropriation of it.

“It’s amazing to be part of city here,” said Wolff. “We’re really excited to be part of the celebration that’s going to be occurring. I know that the city really missed out on some of the festivities this year because of the COVID concerns. I’ve heard as I’m going around the city that everybody’s very excited for this parade and the opportunity for fireworks following to really celebrate the city as well as the Navy.”

Wolff said the city is setting aside an area for sailors and their families to watch the parade. At least one mystic society has offered a limited number of spots on a float to ride in the parade.”

“Those filled up fast,” he said.