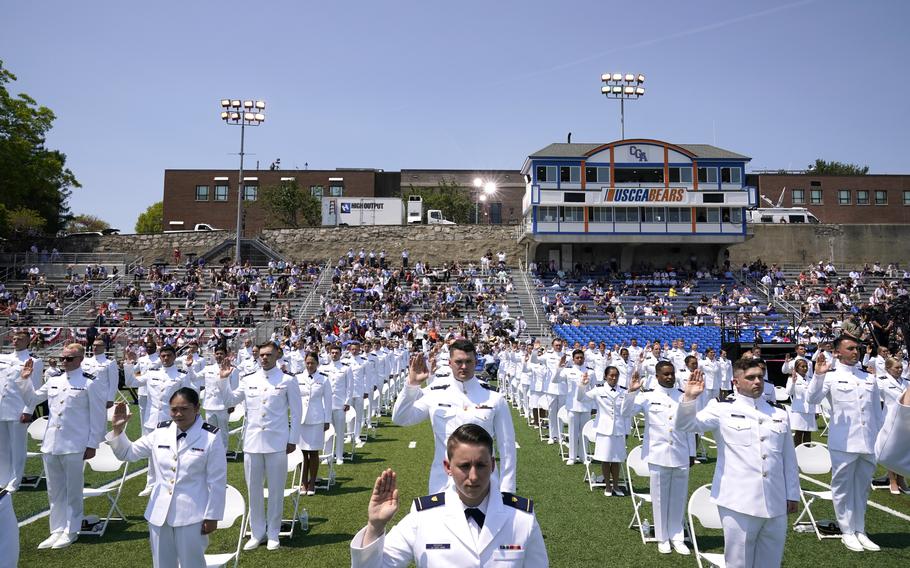 Cadets stand during the commencement for the United States Coast Guard Academy in New London, Conn., Wednesday, May 19, 2021. (Andrew Harnik/AP)

“Being here together is a victory in and of itself, an important marker in the progress we've made to turn the tide of this pandemic. It's a testament of the skill and military discipline [and] sense of responsibility you already embody,” Biden told the Class of 2021.

Flanked by Homeland Security Secretary Alejandro Mayorkas and Commandant Adm. Karl Schultz, Biden spoke to a crowd of 240 U.S. cadets, along with seven international cadets, at the academy’s campus in New London, Conn.

Operating as part of the Department of Homeland Security, the Coast Guard force of roughly 42,000 members has a broad range of missions including conducting search and rescue, drug interdiction, law enforcement and maritime security.

Biden praised members of the Coast Guard for stepping in to aid 250,000 stranded cruise passengers at the start of the pandemic. Later, 500 reservists deployed to support nationwide vaccination efforts.

Disaster response -- long a part of the Coast Guard’s diverse set of missions -- was vital last year, amid the most active hurricane season on record, Biden said.

“We’re seeing more frequent, more intense storms. The Coast Guard was always there to respond, even at the height of the pandemic,” he said. “The Coast Guard has always recognized the broader definition of our national security,” as stewards of the environment and those who work to intercept illicit drug shipments at sea. 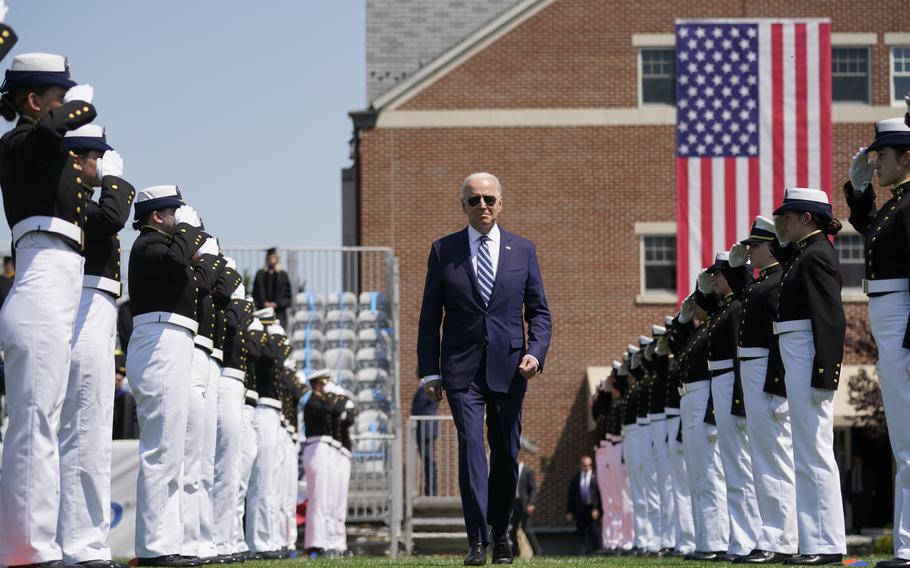 Biden also spoke about the Coast Guard’s role in keeping sea lanes open and secure, amid increasing aggression from Russia and China in the Indo-Pacific region and the Arctic.

“Vital interest to America’s foreign policy is secure, unimpeded flow of global commerce. It won’t happen without us taking an active role to set the norms of conduct, to shape them around democratic values,” he said. “You have an essential role in our efforts to ensure a free and open Indo-Pacific.”

Biden also mentioned a recent agreement between the U.S. Coast Guard with Taiwan’s coast guard to conduct coordinated humanitarian, environmental missions to better defend against threats in the Pacific region.

The Arctic is a region of growing strategic importance, as sea ice recedes and new sea lanes open, he said.

Biden also highlighted that slightly more than one-third of the Coast Guard’s 2021 graduating class is women. He recently nominated Vice Adm. Linda Fagan, the first female four-star admiral to serve as the service’s next vice commandant.

“To see more women at the highest levels of command, we have to make sure that women have the chance to succeed and thrive throughout their careers,” he said.

Biden also reaffirmed his commitment to combat the scourge of sexual assault and harassment in the military and cited the importance of diversity.

“Our national success depends on our capacity to harness the full range of ideas and experiences that exist in our country,” he said.

A news story this week written by reporters from McClatchy and its newspaper the Miami Herald said VerHulst is under investigation for alleged inappropriate sexual conduct with a female cadet at the academy.

Schultz also came under fire in the summer of 2020 when he declined to appear before a joint House Oversight and Homeland Security Committee hearing to address the services’ handling of systemic racist harassment within the service.

A Homeland Security Inspector General report in early June was the focus of the July hearing, which found the Coast Guard Academy was aware of 16 racist harassment cases between 2013 and 2018, of which 11 cases were not investigated thoroughly.

Yet, Biden on Wednesday was optimistic about the future of the Coast Guard’s graduating class.

“You’re the most progressive, best educated, least prejudiced, most open generation in American history. We need you badly. You’re ready. It’s time to get underway,” he told them.