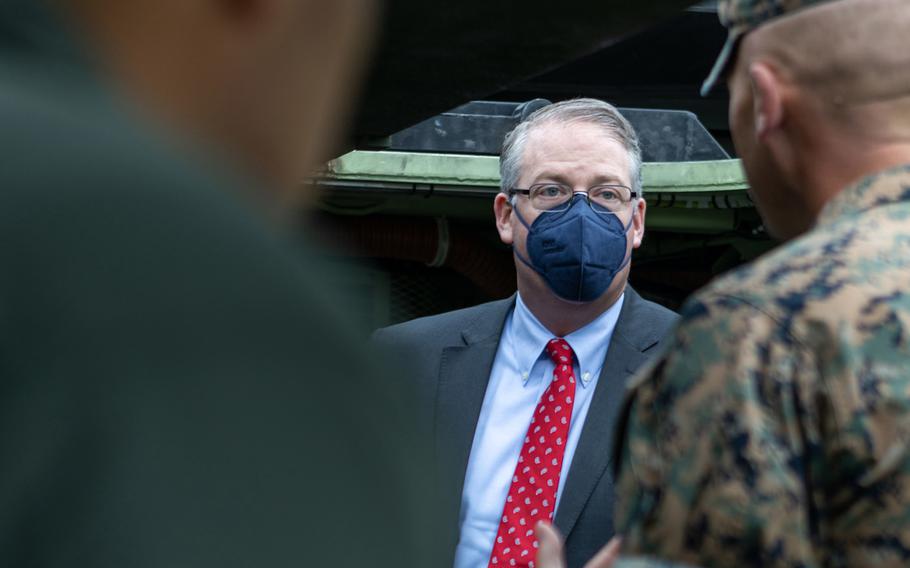 WASHINGTON — The Navy has submitted a reprogramming request to the Defense Department that would allow the service to reallocate some of its current budget to spend on mental health services, acting Navy Secretary Thomas Harker told reporters Wednesday.

The move would fund more embedded mental health practitioners “at the pointy end of the stick with the sailors and Marines, being able to give them services at the units where they are,” Harker said. “This is an area that we strongly believe in because it helps get people access to treatment at an early level, access to informal treatment.”

The program sends hospital corpsman who have taken behavioral health technician classes into units to act as a “immediate first response” for sailors suffering from mental health issues, Harker said. About 35% of those trained as mental health practitioners in the Navy are embedded now.

Harker’s proposal comes after the Navy saw an increase in suicide rates in the Pentagon’s most recent annual report to Congress on suicide in the military. The report was published in August.

Harker did not say how much money the service is asking to move to the program nor where it would come from in the budget. The reprogramming request would require approval from the defense secretary and Congress to enact, he said.

The Navy is also considering an investment of additional funds for the program in its fiscal year 2022 budget, which is expected to be released next week, Harker said.

The acting Navy secretary made the announcement as his office conducts a mental health awareness month video series. In it, he asks Navy personnel to share their personal experiences with mental health.

In the video, Harker said he benefitted from military mental health resources after a traumatic experience while serving aboard Coast Guard cutter Dauntless in February 1993 after it responded to a capsized Haitian ferry vessel carrying nearly 2,000 people.

But “what began as a rescue operation soon became one of recovery,” and his ship took onboard the bodies of more than 80 drowned men, women and children, he said in the video. Afterward, the Coast Guard sent psychologists, psychiatrists and clergy to help the crew process what they had witnessed.

“After an experience like that, no one wanted to talk to mental health professionals, we just wanted to go home, but I'll always be grateful that the Coast Guard made sure we receive counseling,” Harker said.