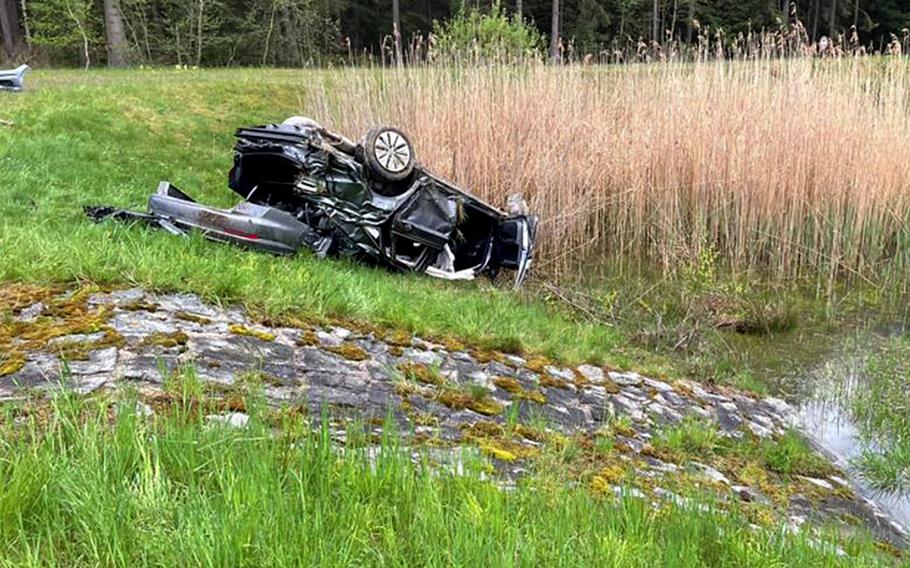 The totaled Volkswagen Jetta of a 23-year-old U.S. service member who was seriously injured in a car accident May 15, 2021, on the A9 autobahn near Bayreuth, Germany, lies on its roof near a drainage ditch. (Pegnitz Fire Department)

KAISERSLAUTERN, Germany — A 23-year-old U.S. service member was seriously injured in a car wreck when he veered from the left lane on the A9 autobahn in Bavaria after his GPS told him to exit the highway, German police and emergency responders said.

The man was driving early Saturday evening when the GPS told him to take the Weidensee exit, police in the city of Pegnitz said in a statement Sunday. He immediately tried to change lanes to get to the exit, but lost control of his Volkswagen Jetta because of the excessive speed he was traveling at, the police said.

The car skidded onto the grass before hitting the guardrail and going airborne for 100 feet, eventually landing upside-down at the edge of a drainage pond, the police report said.

The driver, whom Pegnitz police identified as a U.S. service member, was able to extract himself from the totaled vehicle.

“The driver of the car was lucky that another driver saw the accident, stopped and called the emergency services,” said Pegnitz firefighter Stephan Fleischer.

The drainage ditch that the front of the American’s vehicle was dangling into lies below the highway and isn’t easy to see from the road, he said.

The injured driver was given first aid at the scene before being airlifted by helicopter to a hospital in Bayreuth, where medical staff were able to stabilize him, the police report said. 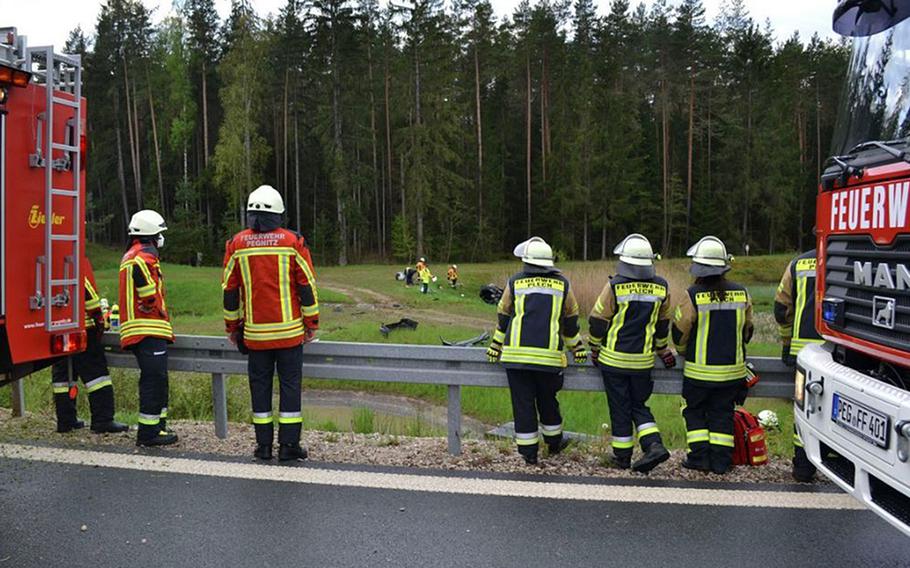 Local firefighters look at the wreckage of a car in a field near Bayreuth, Germany, May 15, 2021. A 23-year-old U.S. service member was seriously injured in the accident on the A9 autobahn. (Pegnitz Fire Department)

U.S. Army Europe and Africa was aware of the accident but could not immediately confirm the identity of the service member or which branch of service he was with, a spokeswoman said.

No other vehicles appear to have been involved in the crash, the police said.

The A9 on- and off-ramps at Weidensee were closed Saturday to allow the rescue helicopter to land, they said, although they did not specify for how long.

Maintenance teams were called in to clean up debris from the accident and fuel that had leaked from the service member’s wrecked car into the drainage ditch, they said, but the accident had little effect on highway traffic.

Material damages caused by the accident, including the totaled Jetta, were estimated at around $36,000, the police said.

Stars and Stripes reporters Jennifer Svan and Karin Zeitvogel contributed to this report.