‘That was because of the Army’: Forces Command commander promotes Army National Hiring Days 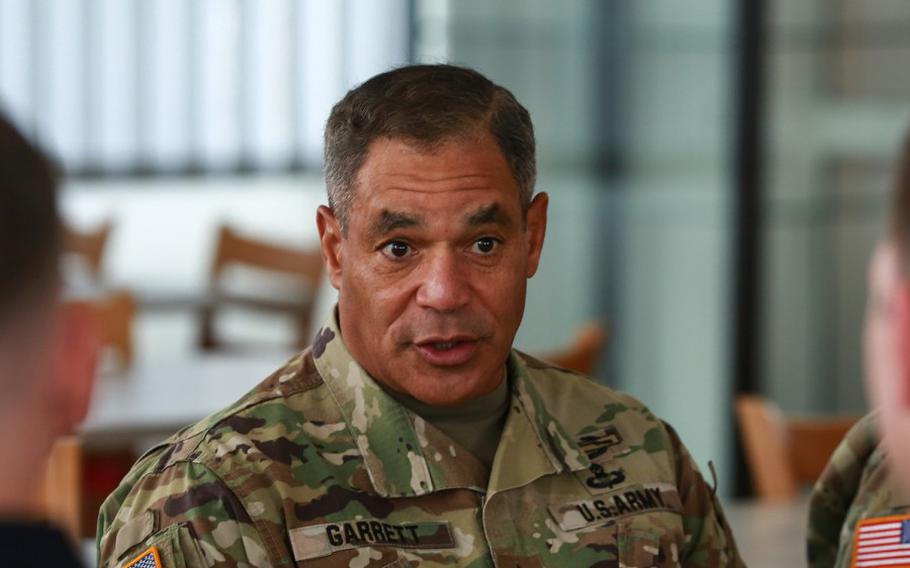 FORT BRAGG (Tribune News Service) — Fort Bragg's only four-star general wants to see others take advantage of the same advantages that he says has kept him in the Army for nearly 37 years — educational opportunities, leadership opportunities, being part of a team, and serving others.

Gen. Michael Garrett is the commander of the U.S. Army Forces Command, which leads more than 750,000 regular Army and Reserve soldiers across the nation.

His own introduction to the Army started with his father, retired Command Sgt. Maj. Edward Garrett, who served for 35 years.

Garrett said he thinks the same opportunities that prompted his father to join the Army as a young Black man in Cleveland during the 1950s still exist today.

"He came into the Army with a 10th-grade education and went on to have a distinguished career and college degrees — and that was because of the Army," Garrett said.

Similar to other military kids, Garrett said, he thought he'd give it a shot, too, though he didn't think he'd have his own 37-year career.

After high school, Garrett attended Xavier University in Cincinnati; and in 1984, he was the first in his family to earn a college degree, commissioning into the Army as a second lieutenant.

"It was what was comfortable for me," Garrett said. "The environment was familiar with me. It was an opportunity for me, and paid for my last two years of college ... and it guaranteed a job upon graduation."

The decision to serve for four years while deciding what to do turned into marking milestones, as he realized he, too, loved the Army.

Army officials hope to add more soldiers to the ranks between now and June 14 — the Army's 246th birthday.

"The last year has been challenging for our nation and the world," Maj. Gen. Kevin Vereen, commander of the U.S. Army Recruiting Command, said in a news release. "We want young people to know the Army offers stability, especially during an unsteady time.

During the five-week campaign, an extra $2,000 incentive is being given to individuals who enlist in one of 11 priority occupations and enter training by the end of September, according to the Army news release.

Many of the more than 150 different Army careers already include signing bonuses up to $40,000, or student loan reimbursement up to $65,000, depending on qualifications, selected occupation, and length of the service contract.

He is a former deputy commanding general of Army Recruiting Command.

Garrett said that though North Carolina and Fort Bragg rank top in the nation for recruits each year, he estimated about 50% of the nation's citizens don't see soldiers on a daily basis or have military ties.

Garrett said the campaign is an opportunity to "introduce everyone to the Army."

"Based on watching my father and my own service, I know that it's a great avenue to become a better leader and to learn more about ourselves and become more disciplined," he said.

Garrett said he views diversity in the force as an asset.

He is the ninth African American four-star general in the Army's history.

In an article he wrote for "Military Review," a professional Army journal, Garrett wrote that he has not experienced overt racism or hatred as a Black soldier. Nor does he think race was a determining factor in his own career, but he has encountered slights or unconscious biases such as having encounters where individuals assumed white soldiers in the group were senior leaders.

Garrett said he thinks diversity is a strategic asset, because it means diverse ideas and diverse experiences will make up the Army.

He said he thinks it is an indication of a unit's readiness by creating diverse, cohesive teams.

"Without diversity, a homogeneous team of soldiers would lack the resilience, perspective, and growth offered by teammates from different backgrounds," Garrett wrote in the Military Review piece. "Without trust, these teams would inevitably make mistakes and miss opportunities on the battlefield—possibly at the cost of American lives."

Garrett said people join the Army to serve or seek new opportunities and education, which is not "exclusive to any one race, ethnicity, gender or religion."

To young adults who don't know what it's like to be part of a team, Garrett said he tells them the Army is "part of being something greater than yourself."

To those who consider joining, he said he asks what kind of shape they're in and what their interests are.

He said the Army provides opportunities for high school graduates on the fence about going to college or who can't afford to go to college.

"There are a number of different ways to earn a degree while serving in the Army, getting a paycheck, accessing world-class healthcare and working in a field that hopefully is a field of your choice," he said.

He said there are more than 150 jobs in the Army, and he's seen growth in cyber capabilities and working in artificial intelligence fields.

According to the Army news release, the Army is also seeking healthcare professionals to fill roles as doctors, nurses, nutritionists and more. Those specialties have incentives such as signing bonuses, student loan repayment and scholarships for medical, dental or veterinary school.

During Army National Hiring Days, interested individuals can visit www.goarmy.com/hiringdays to see if they meet the qualifications; learn about part-time and full-time careers and associated hiring incentives; and connect with a local recruiter.

To become an enlisted soldier, individuals must be a U.S. citizen or permanent resident; be 17-34 years old; achieve a minimum score on the Armed Services Vocational Aptitude Battery test; meet medical, moral and physical requirements; and be a high school graduate or equivalent.