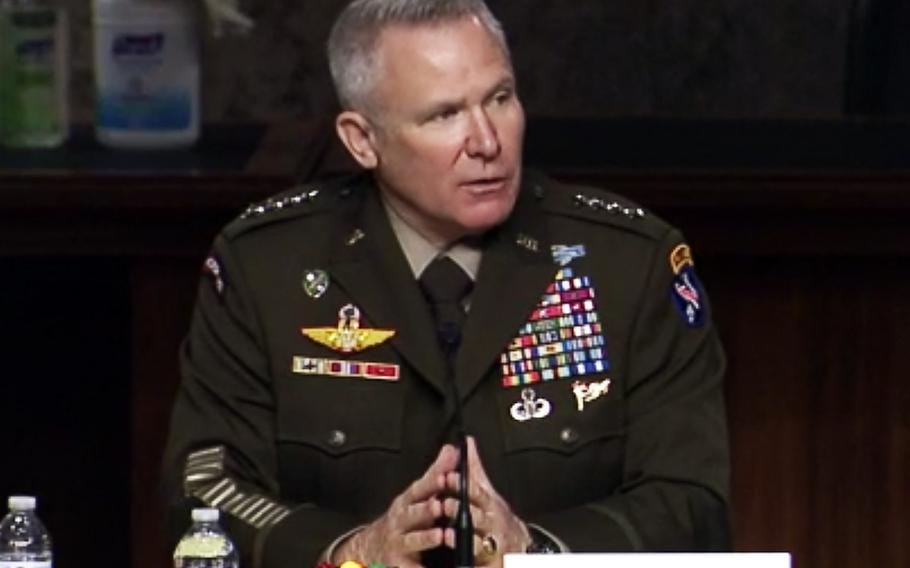 In a screen capture from a video, Gen. Paul LaCamera testifies at a Senate Armed Services Committee hearing on May 18, 2021. (SASC)

Military tensions on the Korean Peninsula are low, but North Korea could begin testing long-range missiles and nuclear weapons again to coerce U.S. officials toward political or sanctions relief, the general nominated to lead American forces in Korea testified Tuesday.

“It appears quiet [in North Korea] given all the other things that are going on, but I have no doubt that the adversaries to the north — he is trying to preserve his country and his legacy,” LaCamera told senators, noting the coronavirus pandemic has impacted North Korea, including its military. “If confirmed, one of the things I'll have to monitor is all of his combat capabilities, both conventional, nuclear and unconventional, that pose a threat to our mission.”

Kim has boasted recently of new weapons, including improved intercontinental ballistic missiles, capable of striking the U.S. homeland, LaCamera noted in his written testimony. North Korea in 2017 conducted two tests of ICBMs — missiles capable of traveling more than 3,500 miles — but it has not shot an ICBM, including the versions that Kim has claimed are more advanced, since then. In 2018, Kim agreed to halt such tests and work toward denuclearization after meeting with former President Donald Trump.

LaCamera also testified Tuesday that North Korea had taken no “concrete steps” toward curtailing its nuclear program, but the general said U.S. Forces Korea under his command would continue to support State Department-led efforts to convince Kim to give up nuclear programs.

During Trump’s 2018 meeting with Kim, the former president also agreed the U.S. military would not conduct large-scale training exercises with South Korean forces. Those exercises, long-considered cornerstone events to defending South Korea, have remained scaled back since that meeting. LaCamera said he would consider what those exercises could look like in the future after taking command. He said the U.S. military and South Korea had retained combat capability in recent years largely through small-scale training and virtual exercises, while also testifying “live training is a lot better than virtual” training.

LaCamera appeared headed toward confirmation, as senators at the hearing noted his vast military experience, including his time commanding U.S. Army forces throughout the Pacific region in his current role, which he has held since November 2019. If confirmed, LaCamera would replace Army Gen. Robert Abrams later this year. Abrams has commanded U.S. Force Korea since 2018.

Sen. Jack Reed, D-R.I., chairman of the Senate Armed Services Committee, said he had known LaCamera since he was a lieutenant colonel.

“You've had an impressive career, selfless dedication to the country and extremely aggressive attitude toward protecting the soldiers that serve underneath you, and I compliment you for those attributes,” Reed said. “Your new assignment is going to be a significant challenge. I think you recognize that, and I believe you are well prepared for it.”

LaCamera is a 1985 graduate of the U.S. Military Academy at West Point, N.Y. He is among the Army’s most combat-experienced officers having served in military operations in Panama and Haiti early in his career and multiple deployments to Afghanistan and Iraq since 2001. He has commanded at every level in the Army, including serving as the top commander of U.S. and coalition forces fighting the Islamic State in Iraq and Syria from 2018 to 2019.

He said Tuesday that his recent experience commanding the U.S. Army forces in the Pacific had prepared him well to lead the more than 28,000 American troops in South Korea, where despite the recent period of decreased tensions the North Korean military remains a major threat.

Beyond Kim’s nuclear and missile programs, LaCamera said the large amount of artillery in North Korea is capable of striking the South Korean capital of Seoul, just some 35 miles from the heavily-armed border between the two nations.

“The conventional threat and [North Korea’s] ability to put many rounds in the air and create panic, just in the conventional side, is concerning,” the general said.