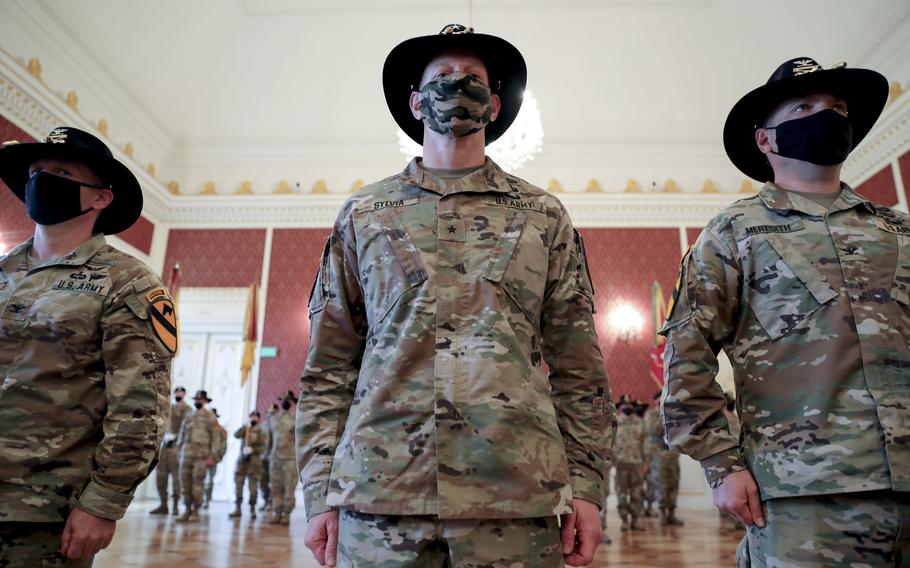 STUTTGART, Germany — The Fort Hood-based “Ironhorse” brigade has a new commander to lead it through the remainder of a nine-month rotation in Europe, which had a rocky start when a previous boss was fired for toxic leadership and hundreds of coronavirus infections spread through the unit.

“This Brigade’s footprint can be felt from the United Kingdom to Georgia as our Troopers have executed operations, fostered partnerships and cultivated friendships across Europe,” Meredith said in a statement.

Meredith replaced Col. Ryan M. Hanson, who briefly stepped into brigade leadership after Col. Michael Schoenfeldt was removed from command after a 1st Cavalry Division investigation resulted in “several adverse findings” related to the bullying of his staff.

Meredith said it was time for the brigade to “move forward and forge something new.”

Soldiers with the 1st Armored Brigade began arriving in Germany in November on a mission to deter Russian aggression along NATO’s eastern flank as part of U.S. European Command’s Atlantic Resolve campaign.

The brigade ran into difficulties almost immediately as it dealt with quarantines and tried to contain a coronavirus outbreak that hit some units especially hard. By December, nearly 300 soldiers in two battalions had tested positive for the virus, multiple brigade officers have told Stars and Stripes.

“This rotation presented the Brigade with many unique challenges,” Hanson said in a statement. “To see how these Troopers banded together, going above and beyond not only accomplishing the mission, but exceeding all expectations, is truly humbling as a Commander.”

So far, the Ironhorse brigade has completed more than 100 missions across dozens of allied and European partner countries, the Army said.