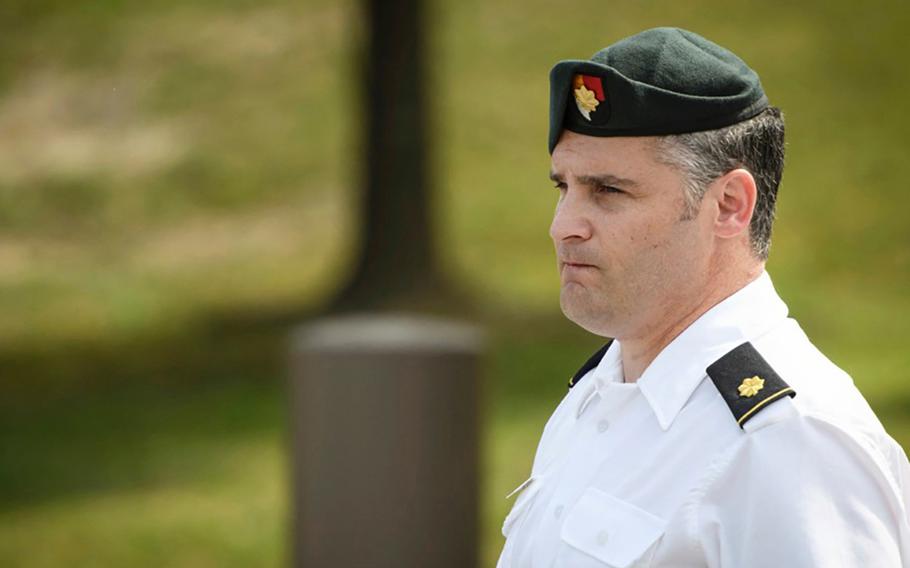 50p na Maj. Mathew Golsteyn, a former Army Special Forces soldier, leaves the Fort Bragg, N.C. courtroom facility on June 27, 2019, after an arraignment hearing where he entered a plea of not guilty in the killing of an unarmed Afghan national in 2010. () 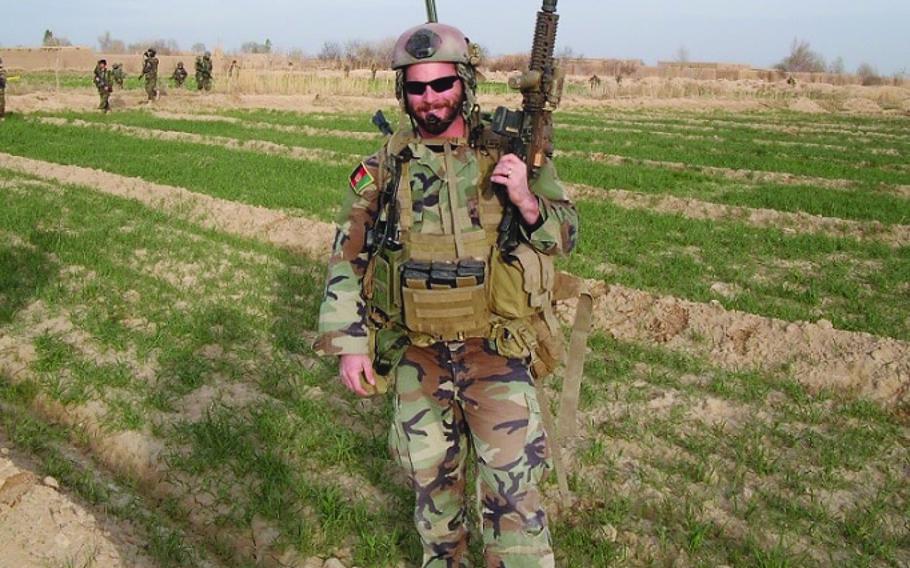 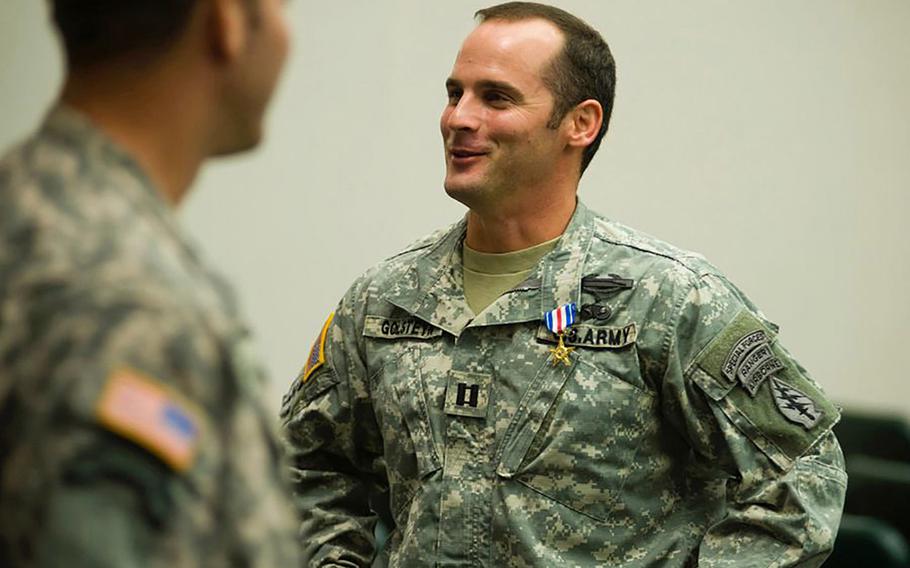 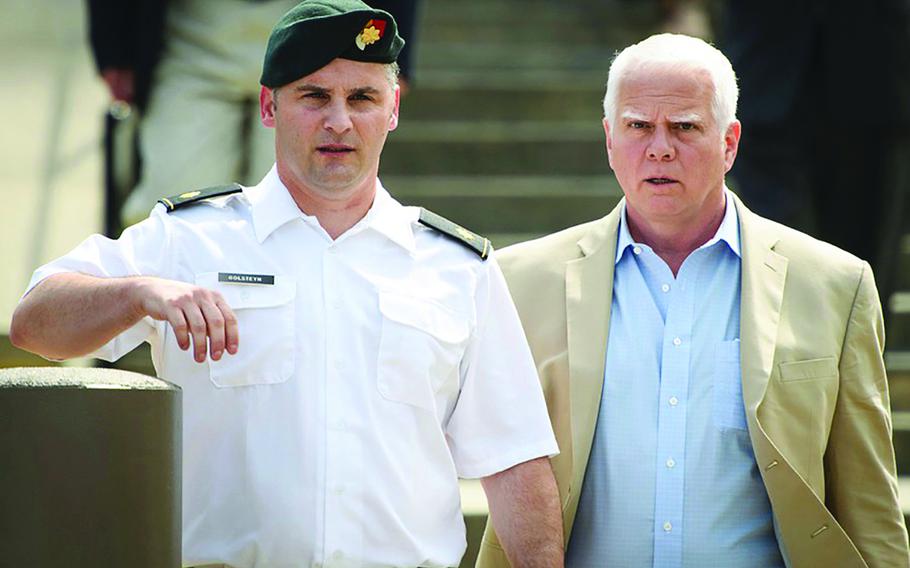 WASHINGTON – The Army has rejected an appeal to return medals for valor to retired Maj. Mathew Golsteyn, a Special Forces soldier former President Donald Trump pardoned for alleged murder in Afghanistan. It was one of three high-profile cases in which Trump interceded on behalf of troops accused of war crimes.

The decision regarding Golsteyn, reached last June, was not announced by the Army in Trump’s final months as president but is revealed in documents released to USA Today. The Army also denied Golsteyn’s request to restore his Special Forces tab, marking his service as a member of an elite unit, and the letter of reprimand placed in his personnel file.

A Green Beret, Golsteyn was charged with killing a suspected bomb maker who had been ordered released after questioning in Afghanistan in 2010. Golsteyn admitted during an interview to join the CIA that he had killed the man. That launched an Army investigation that culminated in the murder charge, but Trump’s pardon canceled his court-martial.

Golsteyn had appealed to the board in December 2019 to restore his Distinguished Service Cross, second only to the Medal of Honor for valor in combat. Initially, Golsteyn had been awarded a Silver Star for heroism, but it had been upgraded after a review.

Trump took up Golsteyn’s cause and that of two other service members accused of war crimes after their stories were championed in conservative news media. Trump pardoned Golsteyn and Army 1st Lt. Clint Lorance, and reversed the demotion for Navy SEAL Edward Gallagher. Trump’s extraordinary intervention in military justice cases created turmoil in Pentagon leadership, leading to the firing of Navy Secretary Richard Spencer for interceding in Gallagher’s case.

The Army review board’s decision on Golsteyn, obtained by a researcher and shared with USA Today, shows that the panel denied all of his claims. The board cited a letter in his case from the Justice Department that Trump’s pardon did not wipe clean Golsteyn’s record.

The “Presidential pardon is a sign of forgiveness and ‘does not indicate innocence,’” the board wrote.

Lt. Col. Gabriel Ramirez, an Army spokesman, acknowledged the denial by the board, its highest level of review for personnel actions. But Ramirez said privacy laws prevent further comment.

Army released report after Trump left office Golsteyn, in a statement provided by his lawyer, blasted the Army for failing to follow Trump’s pledge to expunge his record and clear him of wrongdoing. Trump stated that repeatedly in a November 2019 phone call in which then-Vice President Pence and others took part, Golsteyn said.

“Clearly, we have seen military departments obey the direction of the Commander in Chief in other cases and, inexplicably, the Army defied the President,” Golsteyn said. “It shouldn’t be a surprise the findings of the Army Board were released in November 2020 and not mailed to me for 2 more months, after President Trump left office, so my case could languish in the quagmire of Presidential transition.”

The Army “may have dodged a bullet” by releasing the report after Trump left office, said Dwight Mears, the researcher and author who obtained the record.

“Certainly, the Army had an incentive to avoid antagonizing the president here,” said Mears, a West Point graduate and former history professor at the military academy. “It’s certainly possible Trump could have attempted to overrule the (board), which would be the worst-case scenario for the Army. He could theoretically have ordered them to rule differently, as they are all government employees.”

Golsteyn’s name is redacted in the board’s decision. But the facts and issues cited make clear that he is the subject of their deliberation and his lawyer acknowledged the document’s authenticity.

Afghanistan 2010 The report cites a letter from the CIA to the Pentagon in 2011, acknowledging that Golsteyn admitted killing the unarmed Afghan man.

Golsteyn was a captain in the 3rd Special Forces Group - Airborne in February 2010 when he reported shooting an unarmed Afghan man, the board’s report states. The man had been questioned after the explosion of an improvised explosive device. Golsteyn shot the man, he said, over concern for lives of a local tribal leader’s family and U.S. troops.

“Subject advised he elected to terminate the life of the unarmed combatant because he knew that obtaining evidence in order to convict this individual of the detonation would be ‘hard to get,’” according to the report. Golsteyn admitted that he and another member of the unit disposed of the man’s body.

The commander of Special Forces Command - Airborne reprimanded Golsteyn, citing his admission of violating the laws of war.

“Your behavior in this matter manifests a complete lack of judgment and responsibility ...You have discredited yourself, (Army Special Operations) and the U.S. Army.”

Trump also granted a pardon to Lorance, who had been serving a 19-year sentence for ordering soldiers to fire on unarmed Afghan civilians. Two of them were killed. Gallagher was convicted of posing with the corpse of an ISIS fighter but acquitted of charges of murder and attempted murder.