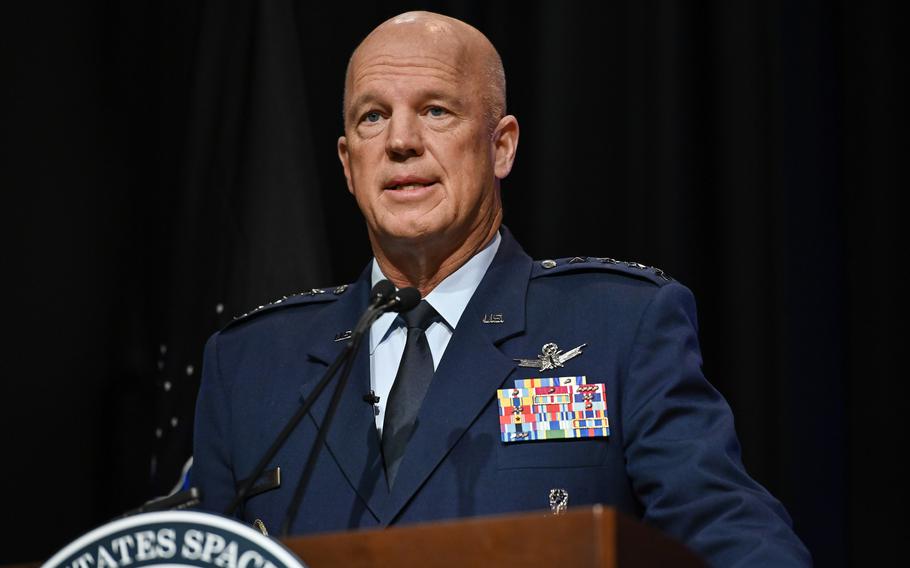 Chief of Space Operations Gen. John W. Raymond delivers remarks during a ceremony at the Pentagon transferring airmen into the U.S. Space Force on Sept. 15. About 300 Airmen at bases worldwide, including 22 in the audience, transferred during the ceremony. (Eric Dietrich/U.S. Air Force) WASHINGTON — The U.S. Space Force plans to almost triple in size and add a Reserve element in 2021, the service’s top general said Tuesday as the newest military branch neared its first birthday.

Gen. Jay Raymond, the chief of Space Operations, will officially become a member of the Joint Chiefs of Staff on Sunday when the Space Force marks its one year anniversary. The space chief told reporters that he was optimistic about his plans to grow the force from about 2,400 active-duty troops to about 6,400 by the end of 2021.

“We were up and running on day one, and we have not let our foot off the accelerator ever since,” Raymond said in a telephone news briefing. “The progress we have made far surpasses anything that I would have would have expected.”

To date, the Space Force is built almost entirely of former Air Force space-focused troops who applied and were selected to transfer into the first new military branch created since the Air Force was split from the Army in 1947. The Space Force did commission 86 Air Force Academy cadets directly into the new service, and it is interviewing candidates to select 98 cadets to commission into the service in the spring, Raymond said.

But 2021 could be the year some space-focused troops serving in the Army and the Navy transfer into the Space Force, Raymond said. The service recently completed a Defense Department-required study on how to best incorporate service members outside the Air Force into the Space Force. Raymond said a few hurdles still exist, but he expected the processes to allow non-Air Force transfers to be in place in 2021.

On Tuesday, the general again declined to describe how a Space Force Reserve element would be constructed.

The National Guard already employs some 1,100 space-focused troops in at least nine states, officials have said. Raymond said his service relies “very heavily” on those forces and Reserve troops to complete its missions, which include operating space-based sensors and protecting American space-based assets.

Without providing any specific details, Raymond hinted his service would soon build an innovative Reserve component not modeled after the Army or Air National Guard or the Reserve components of the other services.

“We’re going to continue to rely on those [Guard and Reserve] assets into the future,” Raymond said. “We think we’ve come up with a really innovative approach … I have told the team, we have an opportunity to be very bold — not just wedded to how we’ve done business in the past, and we think we’ve got a way ahead [for a Reserve component ] that’s going to be very, very valuable to us.”

The service enters its second year just before a presidential transition. While President Donald Trump was among the most vocal champions for the building of the new service, President-elect Joe Biden has not revealed any plans for the new force.

Raymond said he met with members of Biden’s transition team at the Pentagon last week and had “a very good conversation.” But the space chief declined to provide any details or comment on the change in White House leadership.

He said his service is moving forward and there was no indication it could be scrapped under a new administration.

“What I will tell you is what isn’t going to change is my focus, and the focus of our team, and that’s on building a service that delivers a national advantage” in space, Raymond said. “What we’re going to do is keep focused on building that service [and] building partnerships [in the government] to be able to do that and do that well and provide our nation with the vital national interest that is space.”